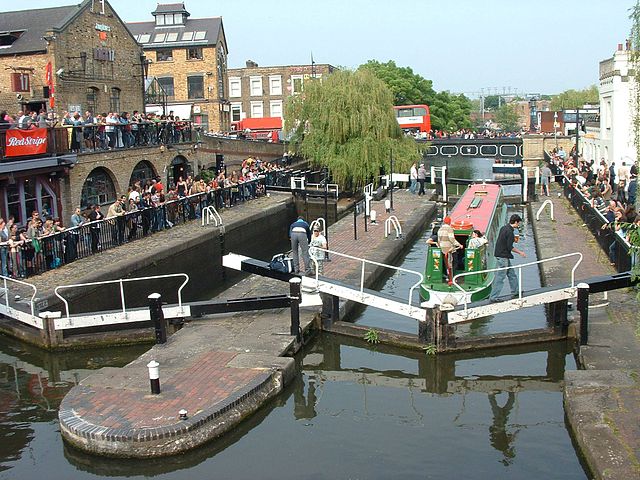 The London Borough of Camden () is a London borough in Inner London. Camden Town Hall, on Euston Road, lies 1.4 mi (2.3 km) north of Charing Cross. The borough was established on 1 April 1965 from the area of the former boroughs of Hampstead, Holborn, and St Pancras — which together, prior to that date, had comprised part of the historic County of London.

The cultural and commercial land uses in the south contrast with the bustling mixed-use districts such as Camden Town and Kentish Town in the centre and leafy residential areas around Hampstead Heath in the north. Well known attractions include The British Museum, The British Library, the famous views from Parliament Hill, the London Zoo, the BT Tower, The Roundhouse and Camden Market. In 2019 it was estimated to have a population of 270,000.

Cooperation Town – a network of food coops and a strategy for resistance
Authors: Real Media, Oct 7, 2020

Food Loop comunity-led food waste recycling project running on Maiden Lane Estate. The aim of Food Loop is to capture the value of the food waste on the estate in order to generate enough income to pay local residents to run and manage the whole system.

The Tale of the Camden Future Journal, Mar 4[1]

A successful food-coop in Kentish Town points to considerable prospects for an updated, kindly anarchism, Jan 5[4]

When a neighbourhood assembly becomes a community by @kahui.[5] Dec 16

What if we did it all, in one place? A big idea to bring the future to life in our cities by Friends of the Earth Innovation team.[6] Nov 11

Alternative.Camden will give people a chance to co-create the future.[8] Jul 3

Camden Friends of the Earth

Page data
Retrieved from "https://www.appropedia.org/w/index.php?title=Camden_community_action&oldid=641814"
Cookies help us deliver our services. By using our services, you agree to our use of cookies.
Categories:
Maintenance categories:
Comments
Privacy policy · About Appropedia · Disclaimers · Mobile view · Content is available under CC-BY-SA-4.0 unless otherwise noted.
</html