From Appropedia
Redirected from Cardiff 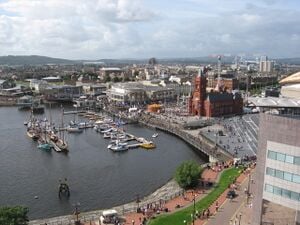 Cardiff (; Welsh: Caerdydd [kairˈdiːð, kaːɨrˈdɨːð] (listen)) is the capital and largest city of Wales. Cardiff had a population of 481,000 in 2021, forms a principal area officially known as the City and County of Cardiff (Welsh: Dinas a Sir Caerdydd), and the city is the eleventh-largest in the United Kingdom. Located in the south-east of Wales and in the Cardiff Capital Region, Cardiff is the county town of the historic county of Glamorgan and in 1974–1996 of South Glamorgan. It belongs to the Eurocities network of the largest European cities. A small town until the early 19th century, its prominence as a port for coal when mining began in the region helped its expansion. In 1905, it was ranked as a city and in 1955 proclaimed capital of Wales. Cardiff Built-up Area covers a larger area outside the county boundary, including the towns of Dinas Powys and Penarth.

Cardiff is part of the Eurocities network of the largest European cities. W

Cardiff is known for its extensive parkland, with parks and other such green spaces covering around 10% of the city's total area.[1]

Cardiff by bike - Cardiff Cycle City, a movement bringing different individuals and groups together in one common vision: to make Cardiff the best cycling city in the UK - Cardiff Cycling Campaign - Cycling Cardiff

Cycling in Cardiff, capital of Wales, is facilitated by its easy gradients and large parks. In the mid-2000s between 2.7% and 4.3% of people commuted to work by cycling in the city. In 2017 12.4% of workers cycled to work at least 5 days a week. However, cyclists in the city are deterred from cycling by poor facilities and aggressive traffic, according to research by Cardiff University.

As the busiest city, Cardiff is statistically the most dangerous place to cycle in Wales. Between 1999 and 2008, 1,000 cyclists were injured on the road, 20% of all cycling accidents in Wales, although the number of injuries to cyclists continues to fall.

Sustainable Cardiff interactive map connecting you to activity in Cardiff

Wages, council tax and school dinners could be paid in Cardiff's own currency, August 31[4]

Page data
Retrieved from "https://www.appropedia.org/w/index.php?title=Cardiff_community_action&oldid=657079"
Cookies help us deliver our services. By using our services, you agree to our use of cookies.
Categories:
About Appropedia · Policies · Contact · Content is available under CC-BY-SA-4.0 unless otherwise noted.