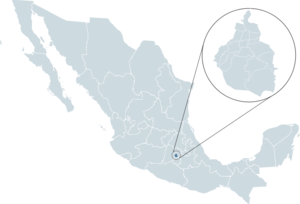 Mexico City is home to 20 million people and has almost 1/5th of the population of all of Mexico. The city has grown beyond the limits of the Federal District and now is part of 59 municipalities in the State of Mexico and 1 in the state of Hidalgo.

Mexico city is located in a basin that used to be filled with waters from Lake Texcoco. The lake formed since there was no natural drainage for the rains running off the mountains and into the basin, thus today there are still problems with flooding. The lake was drained and artificial tunnels dug for development to occur. The city was built above the saturated clays making up the subsoil. Today, as groundwater is depleted from below the city, there has been a steady sinking of the city with 9 meter drops in some areas. This sinking causes problems for storm and waste water treatment systems in the city.

Migrants from Mexico and immigrants from elsewhere flock to the fringes of the city with the hope for economic opportunities and hope that the government will eventually provide public services. However these parts of the city usually are the last to receive any service in terms of access to municipal water or waste water treatment. They are also the first to be violently assaulted and endangered by government officials enforcing a policy of no growth and no sprawl.

The following 19 pages are in this category, out of 19 total.