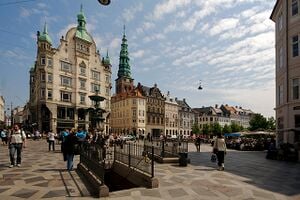 The basic strategy of a Safe System approach is to ensure that in the event of a crash, the impact energies remain below the threshold likely to produce either death or serious injury. This threshold will vary from crash scenario to crash scenario, depending upon the level of protection offered to the road users involved. For example, the chances of survival for an unprotected pedestrian hit by a vehicle diminish rapidly at speeds greater than 30 km/h, whereas for a properly restrained motor vehicle occupant the critical impact speed is 50 km/h (for side impact crashes) and 70 km/h (for head-on crashes).

As sustainable solutions for classes of road safety have not been identified, particularly low-traffic rural and remote roads, a hierarchy of control should be applied, similar to classifications used to improve occupational safety and health. At the highest level is sustainable prevention of serious injury and death crashes, with sustainable requiring all key result areas to be considered. At the second level is real-time risk reduction, which involves providing users at severe risk with a specific warning to enable them to take mitigating action. The third level is about reducing the crash risk which involves applying the road-design standards and guidelines (such as from AASHTO), improving driver behavior and enforcement.

Traffic safety has been studied as a science for more than 75 years.

Pedestrian zones have a great variety of attitudes or rules towards human-powered vehicles such as bicycles, inline skates, skateboards and kick scooters. Some have a total ban on anything with wheels, others ban certain categories, others segregate the human-powered wheels from foot traffic, and others still have no rules at all. Many of Middle Eastern casbas have no wheeled traffic, but use donkey-driven or hand-driven carts for freight transport. W 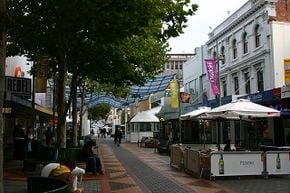 Streets designed primarily with the interests of pedestrians and cyclists in mind and as a social space where people can meet and where children may also be able to play legally and safely. These roads are still available for use by motor vehicles, however their design aims to reduce both the speed and dominance of motorised transport. This is often achieved using the shared space approach, with greatly reduced demarcations between vehicle traffic and pedestrians. Vehicle parking may also be restricted to designated bays. It became popular during the 1970´s in the Netherlands, which is why the Dutch word for a livingstreet (woonerf) is often used as a synonym.

An urban design approach which seeks to minimise demarcations between vehicle traffic and pedestrians, often by removing features such as curbs, road surface markings, traffic signs, and regulations. Typically used on narrower streets within the urban core and as part of living streets within residential areas, the approach has also been applied to busier roads, including Exhibition Road in Kensington, London. W 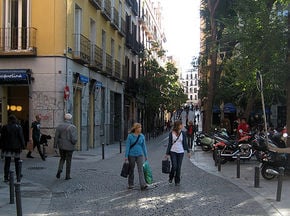 A transportation policy and design approach (United States and Canada), that requires streets to be planned, designed, operated, and maintained to enable safe, convenient and comfortable travel and access for users of all ages and abilities regardless of their mode of transportation. Complete Streets allow for safe travel by those walking, bicycling, driving automobiles, riding public transportation, or delivering goods. W 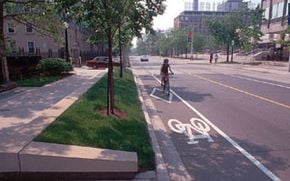 A bicyclist in a bike lane in Toronto

According to the Global status report on road safety, road traffic crashes take the lives of nearly 1.3 million people every year, and injure 20–50 million more.[1] More than 90% of road traffic deaths and injuries occur in low-income and middle-income countries, which have only 48% of the world’s registered vehicles.

WHO adds its voice to evidence that 20mph limits are required for authorities to meet “duty of care” responsibilities, May 8 [2]

Road traffic safety project started in Sweden in 1997 which aims to achieve a highway system with no fatalities or serious injuries in road traffic. A core principle of the vision is that 'Life and health can never be exchanged for other benefits within the society' rather than the more conventional approach where a monetary value is placed on life and health which is then used with a Benefit-cost ratio evaluation before investing money in the road network to decrease risk.

Vision Zero is based on four principles:

Vision Zero style initiatives have been implemented in Sweden and several other countries including the Netherlands, United Kingdom, United States, France, Germany, Spain, and Norway. W

Why it matters[edit | edit source]

Major cause of deaths and injuries (directly)[edit | edit source]

As an example traffic "accidents" kill more than 40,000 each year in the United States alone.

In the western world the number of deaths have been declining in recent years, but in the developing world / "the south", traffic accidents take a larger and a growing toll, as the affluent increasingly use cars, but little is done to ensure acess and safety for those travelling by more sustainable means.

Major cause of deaths and bad health (indirectly)[edit | edit source]

It has been claimed that a large part of the 400,000 estimated to die from a sedentary lifestyle and bad diet in the U.S. yearly could have lived longer if they had used their legs and hearts to go to work/school etc instead of using private cars. The World health organisation recommends 30 minutes of moderate exercise daily.

The fear of being killed in traffic accidents, and partly the measures being put in place to keep pedestrians and cyclists "safe" - that is keep them off the roads, deters people from walking or biking, but using private cars instead. (It needs to be mentioned that in well-functioning cities public transport and walking/cycling can be combined).

When sustainable transport is discouraged, population health is harmed through inactivity, but a modal shift to cycling, walking and the use of public transport would also reduce NOx, SOx, dust, noise, CO2, N2O, ground-level ozone and smog.

The measured improvement in traffic safety in the rich countries, is in part explained by better emergency treatment. Victims that would not have surivived 20 years ago now do. But this costs society a great deal, and seriously injured and molested people are many times as many as the ones killed, and very many of them require special and expensive care for the rest of their lives.

Part of the improvement can be linked to safer cars (safer for the occupants), and safer roads (primarily for motorists).

Part of the improvement might be explained by fewer sustainable and "soft" actors being out there in the traffic. The costs of this shift in terms of obesity/a sedentary lifestyle appears to offset what has been gained from technological advances.

Part of the improvement stems from the realisation that speed kills, and the subsequent creation of reduced speed-zones.

Officially proclaimed by the United Nations General Assembly in March 2010. Its goal is to stabilize and reduce the forecast level of road traffic deaths around the world. It is estimated that 5 millions lives could be saved on the world's roads during the Decade. W