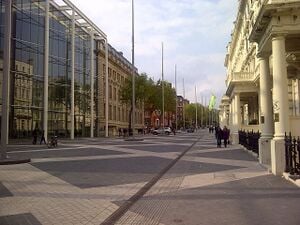 Transport appraisal in the United Kingdom is based on New Approach to Appraisal which was first published in 1998 and updated in 2007. In 2006 the Stockholm Environment Institute wrote a report at the request of the UK Department for Transport titled 'Vision zero: Adopting a Target of Zero for Road Traffic Fatalities and Serious Injuries'. In 2008 the Road Safety Foundation published a report proposing on UK road safety which referenced Vision Zero. In 2014, the UK city of Brighton & Hove adopted vision zero in its 'Safer Roads' strategy, predicated on the safe systems approach, alongside the introduction of an ISO accredited road traffic safety management system to ISO:39001 W 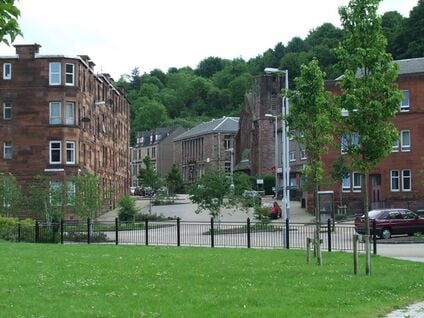 A home zone is a living street (or group of streets) as implemented in the United Kingdom, which are designed primarily to meet the needs of pedestrians, cyclists, children and residents and where the speeds and dominance of the cars is reduced. Encouraging children's play is an important aim of many home zone schemes. Home Zones have a very good safety record, but are not primarily designed as road safety schemes.

Home Zones are encouraged by the UK Government as part of new residential areas. Home Zones often involved the use of shared space, where the street is not strongly divided into exclusive pedestrian and traffic areas. Concerns have been expressed over the inability of blind and partially sighted people to use shared space streets. Providing a clear route for pedestrians that is kept free of traffic, by using street furniture for example, is one way of meeting the needs of the visually impaired.

Well-designed Home Zones often include features such as benches, tables and play equipment to encourage social interaction. Street trees and areas of planting, ideally maintained by residents, will often feature. On-street parking also forms part of the layout in most schemes.

Traffic speeds are kept low - with a typical target speed being around 20 km/h (10-15 mph) - through the overall design of the street and features such as sharp changes of direction for traffic and narrowings where only one motor vehicle can pass at a time. Traditional traffic calming features such as road humps can also be used, but should be integrated into the design rather than being added as an engineered afterthought.

Examples of UK practice include Staiths South Bank in Gateshead, which at over 600 homes was the largest newbuild home zone development in the UK at the time it received planning consent. Most contemporary UK schemes have involved public realm works to existing streets in older Victorian housing areas, often to meet regeneration or traffic calming objectives. W 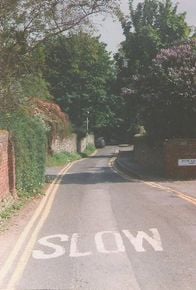 Quiet Lanes are designed to pay special attention to the needs of walkers, cyclists and horse riders, and reduce the problems that the volume and speed of traffic, and the presence of heavy lorries can cause. Motorised traffic is not banned from Quiet Lanes, but shared use and consideration for other road users is paramount.

Under the Transport Act (2000), local authorities are able to designate minor rural roads, for which they are responsible, as Quiet Lanes. Whilst there was no constraint on the use of this power, local traffic authorities must have regard to relevant guidance issued by the Government. In the absence of such guidance authorities have, understandably, been reluctant to pursue Quiet Lanes designations.[2]

GO 20 campaign, coalition of charities calling for 20mph limits to become the norm across built-up areas, to enable people to walk and cycle for their health and enjoyment, and for cheap and sustainable travel, without being or feeling endangered.[3]

Twenty is Plenty: voluntary organisation that campaigns for the introduction of a default 20 mph (32 km/h) speed limit for residential streets and urban streets. By seeking to obtain implementation across a complete local authority or community then the organisation believes that worthwhile speed reductions can be achieved without the usual physical calming features. It terms this type of intervention as "Total 20". No physical calming is required and the local traffic authority can make exceptions where appropriate. It is based in Warrington, England with staff in York and London and has local campaign groups throughout the UK.

The organisation works includes supporting local campaigners in communities who want a 20 mph limit as a default for all its residential roads. As of May 2013 it had 195 local campaigns across the UK. W

Brake is a charity that operates internationally from its bases in the UK and New Zealand and was established in 1995. It coordinates Road Safety Week, inviting participation worldwide, and has many supporters worldwide in communities, companies (particularly those interested in managing their road risk through operation of fleets), emergency services, schools and all other sectors of society. It also provides support services for people bereaved and injured in road crashes and the professionals who care for them, including the emergency services. Its head office is based in the UK.

RoadPeace is the national charity for road crash victims in the UK. It supports the people affected by road crashes with emotional and practical support and advocacy. It operates a help line and provides practical support to people affected. RoadPeace founded the World Day of Remembrance for Road Traffic Victims and established the RoadPeace Wood within the National Memorial Arboretum.

The organisation also seeks to change attitudes so that road deaths and injuries are no longer "treated by the economy as acceptable, by the judicial system as trivial and by society as accidents"; that road crash victims are no longer treated as "third class victims, but as people who have undergone a terrible trauma and who therefore need justice, respect for their rights, care, support and acknowledgement of their loss and suffering". They also work to reduce 'road danger' to that of other everyday activities and to improve services and criminal and civil justice in order to greatly reduced number of road crash victims.

Page data
Retrieved from "https://www.appropedia.org/w/index.php?title=Road_safety_UK&oldid=666174"
Cookies help us deliver our services. By using our services, you agree to our use of cookies.
Categories:
About Appropedia · Policies · Contact · Content is available under CC-BY-SA-4.0 unless otherwise noted.