Kent is a county in South East England and one of the home counties. It borders Greater London to the north-west, Surrey to the west and East Sussex to the south-west. The county also shares borders with Essex along the estuary of the River Thames (connected by land via High Speed 1 and the Dartford Crossing), and with the French department of Pas-de-Calais through the Channel Tunnel. The county town is Maidstone.

Kent was one of the first British territories to be settled by Germanic tribes, most notably the Jutes, following the withdrawal of the Romans. Canterbury Cathedral in Kent, the oldest cathedral in England, has been the seat of the Archbishops of Canterbury since the conversion of England to Christianity that began in the 6th century with Saint Augustine. Rochester Cathedral in Medway is England's second-oldest cathedral. Located between London and the Strait of Dover, which separates England from mainland Europe, Kent has been the setting for both conflict and diplomacy, including the Battle of Britain in World War II and the Leeds Castle peace talks of 1978 and 2004.

England relied on the county's ports to provide warships through much of its history; the Cinque Ports in the 12th–14th centuries and Chatham Dockyard in the 16th–20th centuries were of particular importance. France can be seen clearly in fine weather from Folkestone and the White Cliffs of Dover. Hills in the form of the North Downs and the Greensand Ridge span the length of the county and in the series of valleys in between and to the south are most of the county's 26 castles.

Because of its relative abundance of fruit-growing and hop gardens, Kent is known as "The Garden of England".

Kent's economy is greatly diversified: haulage, logistics and tourism are major industries. In northwest Kent, industries include extraction of aggregate building materials, printing and scientific research. Coal mining has also played its part in Kent's industrial heritage. Large parts of Kent are within the London commuter belt and its strong transport connections to the capital and the nearby continent make Kent a high-income county. Twenty-eight per cent of the county forms part of two Areas of Outstanding Natural Beauty: the North Downs and The High Weald. 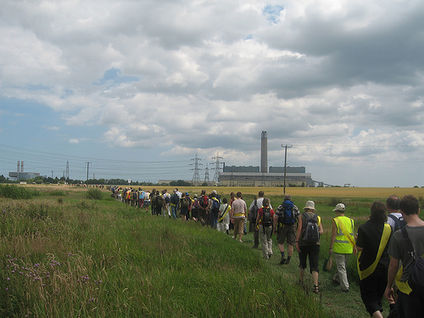 Please see our Local communities in Kent pages, where of course you can share any more information you may have about local sustainability initiatives.

Kent Wildlife Trust (KWT) is a conservation charity in the United Kingdom that was founded in 1958, previously known as the Kent Trust for Nature Conservation. It aims to "work with people to restore, save and improve our natural spaces" and to "ensure that 30% of Kent and Medway – land and sea – is managed to create a healthy place for wildlife to flourish". In 2016 it had thirty-one thousand members and an annual income of £4 million. KWT manages fifty-four nature reserves, of which twenty-four are Sites of Special Scientific Interest, two are National Nature Reserves, nine are Nature Conservation Review sites, seven are Special Areas of Conservation, three are Special Protection Areas, seven are Local Nature Reserves, one is a Geological Conservation Review site, thirteen are in Areas of Outstanding Natural Beauty and one is a Scheduled Monument.

Kent is a county in the southeastern corner of England. It is bounded to the north by Greater London and the Thames Estuary, to the west by Sussex and Surrey, and to the south and east by the English channel and the North Sea. The county town is Maidstone. It is governed by Kent County Council, with twelve district councils: Ashford, Canterbury, Dartford, Dover, Folkestone and Hythe, Gravesham, Maidstone, Thanet, Tonbridge and Malling and Tunbridge Wells. Medway is geographically part of Kent but is a separate unitary authority. The chalk hills of the North Downs run from east to west through the county, with the wooded Weald to the south. The coastline is alternately flat and cliff-lined.

Maidstone Cycle Campaign Forum, charity representing the cycling community in Maidstone, aiming to improve the cycling conditions in Maidstone and encourage people to take up cycling as part of a healthy lifestyle, and also as a practical and environmentally friendly alternative to cars for short journeys to shops, schools, etc. - San Fairy Ann Cycling Club - West Kent CTC

Dartford Litterpickers, tidying up Dartford's public spaces - Landscape Matters, group based in Kent formed in response to concerns about the impact on the landscape of the increasing use of polytunnels. - Strawberry Fields Forever, site maintained by 'Landscape Matters' a group of people who live in and around the village of West Peckham in Kent and beyond who have become increasingly concerned about the spread of polytunnels in the area - Tonbridge Litter Catchers, on facebook

Friends of Calverley Grounds on facebook, community group looking after the park in the centre of Tunbridge Wells

The White Cliffs Countryside Partnership was established in 1989, to help landowners care for the special coast and countryside of Dover and Folkestone and Hythe districts. This includes the only two stretches of Heritage Coast in Kent; the Dover-Folkestone Heritage Coast and the South Foreland Heritage Coast between Dover and Kingsdown near Deal.

Resources: Setting up a communtiy transport scheme in Kent and Medway, kentruralnetwork.org.uk

Overview of health and wellbeing in Kent, LG inform

University of Greenwich Centre for Sustainability