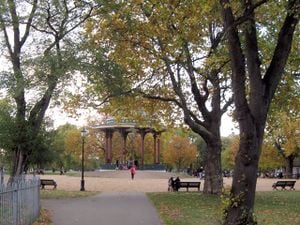 Autumn on Clapham Common Looking along one of the radial paths which converge on the central bandstand. October 2009. Attribution: Chris Reynolds
Location data
Page data

This article focuses on information specific to United Kingdom. Please see our Open spaces activism page for a topic overview.

One quarter of English councils have plans to rewild. Does yours? May 19 [2] ...Biodiversity UK news 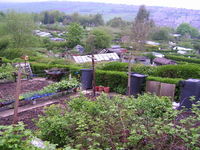 England’s not so green and pleasant land: millions can only access green space size of garden shed. [6] Sep 16 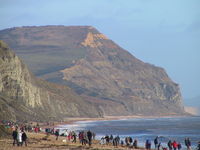 Support growing for National Park bid (which could bring £90m funding to Dorset), May 18 [13]

Parks are a huge asset, and we need to value them for the 21st century, Alison Benjamin, Feb 14 [14]

A slice of the Big Apple coming to a neighbourhood near you, November 7 [17]

The Green Flag Award itself is for public-run open spaces, but the same scheme runs an award for community/charity-run public spaces, such as Millennium Greens and Doorstep Greens called the Green Pennant Award. This scheme, started in 2002, has adapted the criteria for voluntary organizations.

Sites for a Green Pennant Award are judged against eight key criteria: W