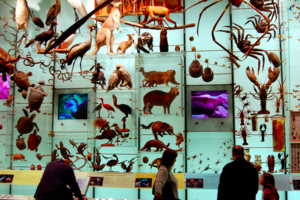 Biological diversity, also more commonly referred to by its contracted form of biodiversity generally refers to the variability of all life forms. In particular, it refers to the grand total or sum of all genes, species, habitats and natural processes constituting the makeup of all life on Earth.

A relatively recent creation, the word "biodiversity" is derived from the Greek word "bio" and the Latin word "diversitas". Yet even though the word is new in the lexicon of English words, it's an old concept and one we've all been familiar with innately and for time immemorial. Biodiversity underpins the food we eat, the clothes we wear, the houses we live in and the activities we perform. It provides many services without which we could not survive.

Biodiversity is complex. Despite our awareness of it as a concept and of portions of it affecting our lives, health and well-being, the part we can see is but a small portion of the whole. Beyond the animals and plants we can see, there are the ones we cannot (whether by reason of location, distance or camouflage). Then there are the fungi and bacteria, as well as those organisms that share characteristics of both plants and animals, all of which form part of the greater biodiversity.

Species is the basic unit by which biodiversity is measured. Biodiversity at the species level consists of the variety of species found.

Genetic diversity represents another level of biodiversity. This refers to the genetic variation that exists within species' individuals. Genetic diversity is important because it is at this level that adaptations to environmental conditions can occur, improving the chances of those individuals to survive and thrive in different environmental conditions. Genetic variability is essential for evolution of the species.

There is a vast amount of diversity of ecosystems on Earth, in which communities of species both interact with one another and form integral parts of, forming part of the ecological processes that help the ecosystem to function. Ecosystems include water, desert, forests, tundra, grasslands, coasts, swamps, estuaries, coral reefs, and more.

What brings about diversity?[edit | edit source]

There are various driving forces behind the resulting diversity of life on planet Earth. These include:

The world's megadiverse countries are:[1]

Biodiversity hotspots refer to areas which have largely intact ecosystems that contain a good representation of the native species and communities that typically form part of the relevant ecosystem.[1]

There is a distinction between the causes of biodiversity loss and the indicators of such loss.