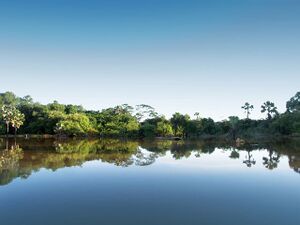 Madagascar (Malagasy: Madagasikara), officially the Republic of Madagascar (Malagasy: Repoblikan'i Madagasikara; French: République de Madagascar), and previously known as the Malagasy Republic, is an island country in the Indian Ocean, off the coast of Southeast Africa. The nation comprises the island of Madagascar (the fourth-largest island in the world), as well as numerous smaller peripheral islands. Following the prehistoric breakup of the supercontinent Gondwana, Madagascar split from the Indian peninsula around 88 million years ago, allowing native plants and animals to evolve in relative isolation. Consequently, Madagascar is a biodiversity hotspot; over 90% of its wildlife is found nowhere else on Earth. The island's diverse ecosystems and unique wildlife are threatened by the encroachment of the rapidly growing human population and other environmental threats. W

Blue Ventures recognises that managing fisheries and marine resources works best when it is in the hands of local communities. This is particularly the case in low-income countries, where the national capacity for enforcement of marine and fisheries legislation may be weak. Blue Ventures' strategy focuses on empowering coastal communities to manage their own resources and develop effective, adaptive and locally appropriate conservation strategies, designed to sustain local small-scale fisheries and safeguard marine biodiversity.

In 2004, the village of Andavadoaka piloted a temporary octopus no-take zone (NTZ) near the island of Nosy Hao. The temporary fishery closure was regarded by the community as a resounding success, its results prompting neighbouring villages up and down the coast to replicate this community-based approach to fisheries management. The village of Andavadoaka was awarded the United Nations Equator Prize as a result of its efforts to promote sustainable marine resource management.

Out of these replication efforts came the need for coordination of these closures among the neighboring villages, and for a combined set of rules and regulations for fishing, outside of octopus gleaning. To fill this need, the communities worked with Blue Ventures and the Wildlife Conservation Society (WCS) to set up the Velondriake locally managed marine area (LMMA), administered by the Velondriake Association. This protected area, which unites over 8000 people from 24 villages in the management of almost 1000km2 of marine and coastal environment, is amongst the largest community-managed marine protected area in the Indian Ocean. In 2014 Blue Ventures worked with communities in the north west of Madagascar to support the establishment of the West Indian Oceans' largest LMMA in the Barren Isles.

In 2012, 55 community members representing 18 LMMAs throughout Madagascar came together to share their experiences at Madagascar’s first national LMMA forum. This meeting resulted in the creation of a national LMMA network called MIHARI, an acronym for MItantana HArena and Ranomasina avy eny Ifotony, that translates to “Marine resources management at the local level”. Blue Ventures is working with network members to support and develop the MIHARI network by providing training and educational tools.

Madagascar is home to nearly 4,000 km2 of mangrove forests, the fourth largest extent found in Africa. These “blue” forests provide a bounty of ecosystem services for millions of coastal people around the world; they protect coasts, regulate water quality, offer habitat for many marine species, and supply food and raw materials. However, they are also central in helping to fight global climate change due to their exceptional ability to sequester carbon dioxide (CO2) from the atmosphere. In 2011 Blue Ventures established the blue forests project to incentivise community-based conservation of mangrove ecosystems in western Madagascar. Blue Ventures is working to generate carbon offsets, such as REDD+, through the conservation and restoration of mangrove forests, promoting sustainable management of mangroves while contributing to poverty alleviation. The blue forests project is using cutting-edge scientific research to examine deforestation and carbon sequestration in mangroves, while also engaging local communities about the importance of mangrove forests.

In 2014, Blue Ventures led the formation of Madagascar’s national PHE Network, linking 35 conservation and health organizations working in some of Madagascar’s most biodiverse and under-served areas. W

Despite the deforestation trend, tree cover is increasing in some parts of the country, though largely of introduced (non-native) species. Some of these trees are planted by foresters and farmers; others have become invasive of their own accord. Reforestation by eucalypts, pines, and wattles has been demonstrated, for instance, in the central highlands. W

How clean energy is helping the people of Madagascar (and the planet), August 19 [1]

Madagascar's varied fauna and flora are endangered by human activity. Since the arrival of humans around 2,350 years ago, Madagascar has lost more than 90 percent of its original forest. This forest loss is largely fueled by tavy ("fat"), a traditional slash-and-burn agricultural practice imported to Madagascar by the earliest settlers.[40] Malagasy farmers embrace and perpetuate the practice not only for its practical benefits as an agricultural technique, but for its cultural associations with prosperity, health and venerated ancestral custom (fomba malagasy).

It is anticipated that all the island's rainforests, excluding those in protected areas and the steepest eastern mountain slopes, will have been deforested by 2025. Invasive species have likewise been introduced by human populations. Habitat destruction and hunting have threatened many of Madagascar's endemic species or driven them to extinction.

In 2003 Ravalomanana announced the Durban Vision, an initiative to more than triple the island's protected natural areas to over 60,000 km2 (23,000 sq mi) or 10 percent of Madagascar's land surface. As of 2011, areas protected by the state included five Strict Nature Reserves (Réserves Naturelles Intégrales), 21 Wildlife Reserves (Réserves Spéciales) and 21 National Parks (Parcs Nationaux). In 2007 six of the national parks were declared a joint World Heritage Site under the name Rainforests of the Atsinanana. These parks are Marojejy, Masoala, Ranomafana, Zahamena, Andohahela and Andringitra. Local timber merchants are harvesting scarce species of rosewood trees from protected rainforests within Marojejy National Park and exporting the wood to China for the production of luxury furniture and musical instruments. To raise public awareness of Madagascar's environmental challenges, the Wildlife Conservation Society opened an exhibit entitled "Madagascar!" in June 2008 at the Bronx Zoo in New York W