From Appropedia
Redirected from Burkina Faso 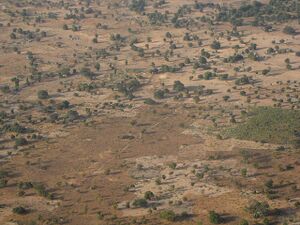 Burkina Faso (UK: , US: (listen); French: [buʁkina faso]) is a landlocked country in West Africa with an area of 274,200 km2 (105,900 sq mi), bordered by Mali to the northwest, Niger to the northeast, Benin to the southeast, Togo and Ghana to the south, and the Ivory Coast to the southwest. It has a population of 20,321,378. Previously called Republic of Upper Volta (1958–1984), it was renamed Burkina Faso by President Thomas Sankara. Its citizens are known as Burkinabè ( bur-KEE-nə-beh), and its capital and largest city is Ouagadougou.

The largest ethnic group in Burkina Faso is the Mossi people, who settled the area in the 11th and 13th centuries. They established powerful kingdoms such as the Ouagadougou, Tenkodogo, and Yatenga. In 1896, it was colonized by the French as part of French West Africa; in 1958, Upper Volta became a self-governing colony within the French Community. In 1960, it gained full independence with Maurice Yaméogo as President. In its early years, the country was subject to instability, droughts, famines and corruption. Various coups have also taken place in the country, in 1966, 1980, 1982, 1983, 1987, an attempt in 1989, 2015, and 2022. Thomas Sankara served as the country's President from 1982 until he was killed in the 1987 coup led by Blaise Compaoré who became president and ruled the country until his removal on 31 October 2014. Sankara launched an ambitious socioeconomic programme which included a nationwide literacy campaign, land redistribution to peasants, railway and road construction, and the outlawing of female genital mutilation, forced marriages, and polygamy.

Burkina Faso has been severely affected by the rise of Islamist terror in the Sahel since the mid-2010s. Several militias, partly allied with Islamic State (IS) or al-Qaeda, operate across the borders to Mali and Niger. More than one million of the country's 21 million inhabitants are internally displaced persons. On 24 January 2022, the military and its "Patriotic Movement for Safeguard and Restoration" (MPSR) declared itself to be in power. Previously the military had executed a coup against President Roch Marc Kaboré. On 31 January, the military junta restored the constitution and appointed Paul-Henri Sandaogo Damiba as interim president.

Burkina Faso is a least developed country with a GDP of $16.226 billion. 63% of its population practices Islam and 22% practice Christianity. Due to French colonialism, the country's official language of government and business is French. There are 60 indigenous languages officially recognized by the Burkinabè government, with the most common language, Mooré, spoken by over 50% of Burkinabè. The country is governed as a semi-presidential republic with executive, legislative and judicial powers. Burkina Faso is a member of the United Nations, La Francophonie and the Organisation of Islamic Cooperation. It is currently suspended from ECOWAS and the African Union.

"Manufacture and Popularization of Biomass Briquettes". Aiming to replace wood and charcoal with biomass briquettes from fallen leaves and other sources of unused biomass, this progressive enterprise of local and international NGOs and a research institution helps to combat desertification, create jobs in rural communities and raise awareness for alternative energy sources.

"Initiative for Promoting and Distributing Bio-Pesticides". The initiative's ambitious goal is to promote and distribute ecological pest control for organic crops, especially cotton, vegetable and oil-producing crops. In this way, the partnership of local and community-based organizations and research agencies hopes to increase yields and preserve the production environment.

"Nafore & Afrisolar energy kiosks". A small business and international NGOs are cooperating to provide sustainable energy supply to poor communities by expanding the use of "Nafore", a PV-based telephone charger, powered 100% on solar energy.

Burkina Faso is largely wild bush country with a mixture of grass and small trees in varying proportions. The savanna region is mainly grassland in the rainy season and semi desert during the harmattan period (defined as the period when stormy and dusty Sahara winds blow dry and hot). Fauna, one of the most diverse in West Africa, includes the elephant, hippopotamus, buffalo, monkey, lions, crocodile, giraffe, various types of antelope, and a vast variety of bird and insect life.

To ensure conservation and preservation of the wildlife of Burkina Faso, four national parks have been established. These are the Po National Park in the south-centre of the country, Arli National Park established in 1954 in the southeast, W of the Niger National Park, a trans frontier park existing since 1957 in the east bordering Benin and Niger and the Deux Balés National Park. The forests, fauna and fish have been declared part of the national estate of Burkina Faso. In addition, the List of national parks of Burkina Faso consist of one UNESCO Biosphere reserve, three Complete Reserves, six Partial Reserves and ten protected forests. However, according to conservation classification conducted between 1936 and 1957, the country has 78 protected areas that cover 38,369 km2 (14,814 sq mi), which accounts to about 14% of the area of the country. W

Yacouba Sawadogo is a farmer from the west African nation of Burkina Faso who has been successfully using a traditional farming technique called Zaï to restore soils damaged by desertification and drought. A documentary feature film The Man Who Stopped the Desert (2010) first screened in the UK portrays his life.

Zaï holes: Zaï holes are holes dug in the soil. Traditionally they were used in a limited way to restore barren land. Yacouba Sawadogo introduced the innovation of filling them with manure and other biodegradable waste, in order to provide a source of nutrients for plant life. The manure attracts termites, whose tunnels help break up the soil further. He also increased the size of the holes slightly over the traditional models. Zaï holes have been used to help cultivate trees, sorghum, and millet.

Outreach: To promote these methods, particularly zaï holes, Yacouba Sawadogo holds bi-yearly "Market Days" at his farm in the village of Gourga. Attendees from over a hundred regional villages come to share seed samples, swap tips, and learn from one another. W

Burkina Faso is faced with high levels of food insecurity, which links with poverty and challenging climatic variation, ranging from severe flooding to extreme drought. High rates of food insecurity are particularly prevalent in rural populations. The World Food Programme has several projects it is working on that are geared towards increasing food security in Burkina Faso. W