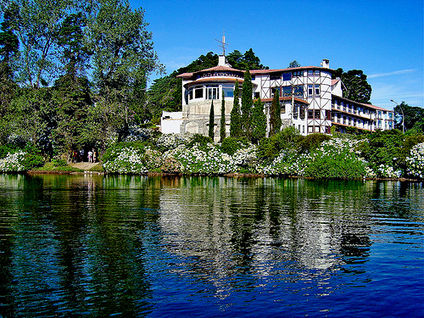 Brazil is the largest country in both South America and Latin America. At 8.5 million square kilometers (3.2 million square miles) and with over 211 million people, Brazil is the world's fifth-largest country by area and the sixth most populous. Its capital is Brasília, and its most populous city is São Paulo. It is one of the most multicultural and ethnically diverse nations, due to over a century of mass immigration from around the world.

Bounded by the Atlantic Ocean on the east, Brazil has a coastline of 7,491 kilometers (4,655 mi). It borders all other countries in South America except Ecuador and Chile and covers 47.3% of the continent's land area. Its Amazon basin includes a vast tropical forest, home to diverse wildlife, a variety of ecological systems, and extensive natural resources spanning numerous protected habitats. This unique environmental heritage makes Brazil one of 17 megadiverse countries, and is the subject of significant global interest and debate regarding deforestation and environmental protection. W

Please see our Local communities in Brazil pages, where of course you can share any more information you may have about local sustainability initiatives.

Home to 60% of the Amazon Rainforest, which accounts for approximately one-tenth of all species in the world, Brazil is considered to have the greatest biodiversity of any country on the planet. It has the most known species of plants (55,000), freshwater fish (3000) and mammals (over 689). It also ranks third on the list of countries with the most number of bird species (1832) and second with the most reptile species (744). The number of fungal species is unknown, but is huge. Approximately two-thirds of all species worldwide are found in tropical areas, often coinciding with developing countries such as Brazil. Brazil is second only to Indonesia as the country with the most endemic species. W

Even though progress has been made in conserving Brazil’s landscapes, the country still faces serious threats due to its historical land use. Amazonian forests substantially influence regional and global climates and deforesting this region is both a regional and global driver of climate change due to the high amounts of deforestation and habitat fragmentation that have occurred this region. Brazil has established an extensive network of protected areas which covers more than 2 million km2 (25% of Brazil's national territory) and is divided almost equally between protected natural areas or conservation units and indigenous land ("Terras Indígenas"). Despite these measures, environmental protection is still a concern as indigenous tribes and Brazilian environmental activists contend with ranchers, illegal loggers, gold and oil prospectors and drug traffickers who continue to illegally clear forests. W

Recognizing the need to make basic foods more readily available to low-income people, the "Restaurantes Populares" initiative (People's Restaurants, or Popular Restaurants in the original Portuguese) has been a key part of Belo Horizonte's pioneering Food and Nutrition Security Policy (Law No. 6.352, 15/07/1993).

Strategically distributed across various areas of the city to broaden access to the vulnerable population, there are currently four People's Restaurants and one canteen that promote equity over "fast culture." They provide cheap, healthy, safe and accessible food for all, made from fresh local produce. As reported by ICLEI in 2013, lunch costs 3 reals (about $1), half that price to the beneficiaries of the "Bolsa Família" (Family Basket) program, and free to the registered homeless — which represent about 160,000 people per year. In order to maintain the consistency of both price and quality, all the outlets are directly managed and administered by the municipality.

The program has allowed the community not only to make sure that the population is provided with fresh, nutritious food, but also to create a secure market for local farmers to sell their produce. According to Fondazione Giangiacomo Feltrinelli's report, Milan Urban Food Policy Pact, Belo's People's Restaurants serve almost 3 million meals annually. [1]

wikipedia:List of national parks of Brazil

Brazil once had the highest deforestation rate in the world and in 2005 still had the largest area of forest removed annually.[1] Since 1970, over 600,000 square kilometers (230,000 sq mi) of the Amazon rainforest have been destroyed. In 2012, the Amazon was approximately 5.4 million square kilometres, which is only 87% of the Amazon’s original state.

Rainforests have decreased in size primarily due to deforestation. Despite reductions in the rate of deforestation in the last ten years, the Amazon Rainforest will be reduced by 40% by 2030 at the current rate.[3] Between May 2000 and August 2006, Brazil lost nearly 150,000 square kilometres of forest, an area larger than that of Greece. According to the Living Planet Report 2010, deforestation is continuing at an alarming rate, but at the CBD 9th Conference 67 ministers signed up to help achieve zero net deforestation by 2020. W

Why Women in Brazil Are Turning to the Solidarity Economy, Jan 17 [9]

From the favelas: the rise of rooftop solar projects in Brazil, May 24 [10]

Solar is changing lives in Brazil. Here’s how. February 3 [13]

Collaboration and changing beliefs are two keys for a degrowth economy, November 23 [14]

Clean Up the World weekend 2010: Members of the Brazilian Institute for the Protection of Nature will join with their communities to restore Parque Ecológico do Tietê in São Paulo, the largest linear park in the world. They will also conduct a clean up along the iconic Amazon River in the city of Manaus. [20] September 15

Blogger Cristiana Soares, in collaboration with net-citizens, launched Projeto Enchentes [Project Floods, pt], a platform for tracking — and gathering information about – floods in Brazil. The project counts with a collaborative map created by Henrique Brandão. [22] January 4

In Brazil, desertification has increased in the Caatinga, in the zones of droughts in the Northeast and North of the state of Minas Gerais, as well as in the states that didn’t suffer of droughts nor desertification before like in Rio Grande do Sul. The Amazon River has been through a major drought just a little time ago, with a large amount of fish dying because of this. [24] November 4

"One Million Cistern Program (P1MC)". Local NGOs and local community associations have joined forces with the national government and international agencies to develop and build one million home cisterns to collect and store rain water in the semi-arid region, bringing access to potable water for poor rural families.

"The sustainable use of Amazonian seeds". Regional development in the Brazilian Amazon is the aim of the partners, achieved by encouraging the organization of the local communities as a co-operative, and by transferring technologies and training the community in the production of oils made from Amazonian seeds, resulting in increased incomes for these communities.

"Eco-Amazon Piabas of Rio Negro". A national NGO, a cooperative of small producers and public authorities are working together to build a niche market of specialty ornamental fishes and to introduce a fair trade system through socio-environmentally responsible fishing.

Flooding, drought and cyber-activism in Brazil, [26] May 11

The City that Ended Hunger, A city in Brazil recruited local farmers to help do something U.S. cities have yet to do: end hunger. [28] Frances Moore Lappé, Feb 13. “To search for solutions to hunger means to act within the principle that the status of a citizen surpasses that of a mere consumer.” CITY OF BELO HORIZONTE, BRAZIL

The only way to save the rainforest is to save the Indians, by recognising their land rights, says Brazilian shaman, [29] October 10

Ecoversidade is IPEC’s educational arm and is dedicated to education for sustainable living by fostering a profound understanding of the natural world, grounded in direct experience, that leads to sustainable patterns of living. Ecoversidade functions as a model of viable rural settlement, incorporating the realities of appropriate technology, living systems and sustainable community life from a holistic perspective.

IPEC is also the host of the 8th International Permaculture Convergence, taking place May 22–25, 2007 to provide a unique opportunity for permaculturalists to set continental and global agendas, make appropriate connections, and share innovative experiences. W