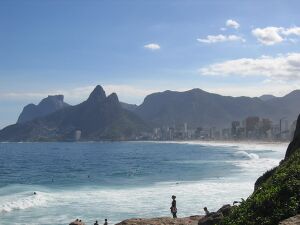 Rio de Janeiro (UK: REE-oh də jə-NEER-oh, US: REE-oh dee zhə-NAIR-oh, Portuguese: [ˈʁi.u d(ʒi) ʒɐˈne(j)ɾu] (listen); literally 'River of January'), or simply Rio, is the capital of the state of the same name, Brazil's third-most populous state, and the second-most populous city in Brazil, after São Paulo. Listed by the GaWC as a beta global city, Rio de Janeiro is the sixth-most populous city in the Americas. Part of the city has been designated as a World Heritage Site, named "Rio de Janeiro: Carioca Landscapes between the Mountain and the Sea", on 1 July 2012 as a Cultural Landscape.

RioOnWatch.org, English language mirror to Favela.Info, a collective blog about the changes and happenings in Rio de Janeiro in the lead up to the 2016 Olympic Games, to be held in the city.

CatComm realizes people solve crises in their communities every day, and the Internet is the perfect tool to replicate these successes.They collect and posts how-to examples in our Community Solutions Database. These real-life stories address a wide range of issues, from HIV prevention to spurring economic growth, providing effective care for children and the elderly, and much more. The database of over 130 projects inspires people to make a difference around the world.

The three-degree world: cities that will be drowned by global warming, Nov 3[3]

The Favela as a Community Land Trust: A Solution to Eviction and Gentrification? Nov 15[4]

Solidarity Economy Part I: Cooperative Development in Rio and Beyond, Sep 29[5]

The Cost of Living in Rio de Janeiro Is Too Damn High, time for the Surreal? January 30[7]

Page data
Retrieved from "https://www.appropedia.org/w/index.php?title=Rio_de_Janeiro_community_action&oldid=662638"
Cookies help us deliver our services. By using our services, you agree to our use of cookies.
Categories:
About Appropedia · Policies · Contact · Content is available under CC-BY-SA-4.0 unless otherwise noted.