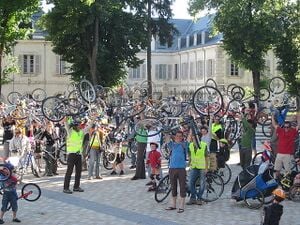 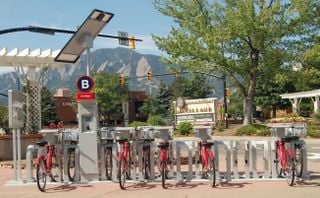 A bicycle sharing system, public bicycle system, or bike share scheme, is a service in which bicycles are made available for shared use to individuals on a very short term basis. Bike share schemes allow people to borrow a bike from point "A" and return it at point "B". Many bike-share systems offer subscriptions that make the first 30–45 minutes of use very inexpensive, encouraging their use as transportation. This allows each bike to serve several users per day. In most bike-share cities, casual riding over several hours or days is better served by bicycle rental than by bike-share. For many systems, smartphone mapping apps show nearby stations with available bikes and open docks. W

A bike bus, also known as a bike train or a cycle train, is a group of people who cycle together on a set route following a set timetable. Cyclists may join or leave the bike bus at various points along the route. Most bike buses are a form of collective bicycle commuting. W 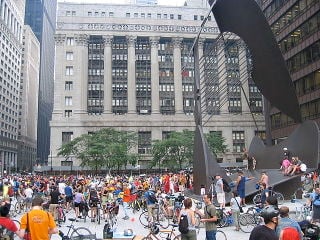 Critical Mass is a cycling event typically held on the last Friday of every month; its purpose is not usually formalized beyond the direct action of meeting at a set location and time and traveling as a group through city or town streets on bikes.

The event originated in 1992 in San Francisco; by the end of 2003, the event was being held in over 300 cities around the world.

Critical Mass has been described as "monthly political-protest rides", and characterized as being part of a social movement. It has been described as a "monthly protest by cyclists reclaiming the streets." Participants have insisted that these events should be viewed as "celebrations" and spontaneous gatherings, and not as protests or organized demonstrations. This stance allows Critical Mass to argue a legal position that its events can occur without advance notification of local police.W 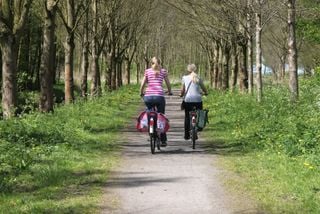 There are many organisations worldwide whose primary mission is to advocate these goals. Most are non-profit organisations supported by donations, membership dues, and volunteers. W 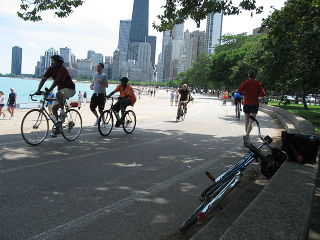 Cycling culture refers to cities and countries which actively support a large percentage of utility cycling. Examples include Denmark, the Netherlands, Germany, Sweden, China, Bangladesh and Japan. A city with a strong bicycle culture usually has a well-developed cycling infrastructure, including segregated bike lanes and extensive facilities catering to urban bicycles, such as bike racks. There are also towns in some countries where bicycle culture has been an integral part of the landscape for generations, even without much official support. That is the case of Ílhavo, in Portugal. North American cities with bicycle cultures include Madison, Portland, San Francisco, Toronto, Montreal, Lincoln, Peoria, and the Twin Cities. W

There are now over 100 million electric bicycles in China -- the most popular (by far) "green" vehicles in the world. [1] 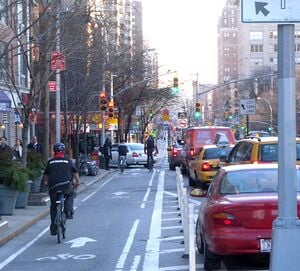 The bicycle is the most energy efficient means of land transportation known to man.

A person cycling pollutes very little. This even holds true in a life-cycle perspective, where the production and disposal of the bike is included, when comparing to those going by car or even by bus.

The life-cycle pollution and total financial costs of a private car is much higher than what is generally acknowledged.

Similarly the total costs to society of bloated use of the private car is vastly underestimated.

A cyclist often inhales air that is less polluted than a car driver, because of the position of the air intake, and the slow ventilation in a car. Larger volumes of air inhaled might compensate this to a certain extent, but cyclist have better health, so it appears to generally take more before pollution effects cyclists adversely. Besides, if local air pollution from cars is a problem, then more cycling and reduced car traffic would be part of the solution, leading to less pollution, rather than the opposite. Any restrictions on cars, and provisioning for cyclist access would consitutes a strengthening of the polluter pays principle (ref: Cycling the way ahead...)

Increased cycling is a splendid and easy way to increase biofuel shares of total fuels consumption, and increase energy efficiency 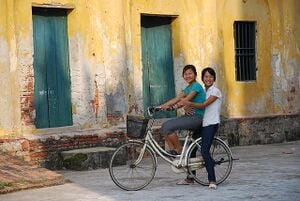 See the point about traffic fumes above.

The obesity and sedentary epidemic is poised to be one of the top health problems of the OECD-countries, passing cigarette smoking in the number of people killed yearly. Some official estimates from the U.S. puts the estimated number of deaths due to bad diet and lack of exercise combined at 300 000 a year, wich means 0,1 % of the population. This vastly exceeds the number of people killed in traffic yearly, which is more than 40 000 persons yearly, in the USA

To fight the ill health effects of increasingly sedentary ( still-sitting) lifestyles, the WHO recommends that every adult do light exercise for a total of 30 minutes each day. Moderate exercise is preferrable to vigourous exercise as the effect for health is comparable and the risk of injuries less. Exercise that is part of the daily routine is preferrable, as it is more likely to be sustained. All in all cycling or walking all or part of the way to work, school or other regular errands, is a perfect match to those recommendations.

Most will find cycling for daily errands much cheaper than paying for going to the gym or a swimmingpool.

Cycling is kinder to the knee joints than jogging, and is believed by some experts to give superior cardiovascular exercise. 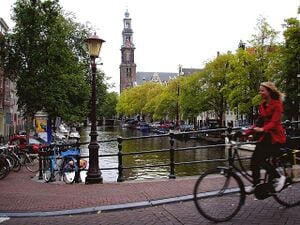 It is possible : Cities like Oulu (northern Finland), Trondheim (Norway), Copenhagen (Denmark), Groningen and Amsterdam (The Netherlands) and Beijing (China) all have cycling levels exceeding 10% modal share. All except Trondheim exceed 25% modal share. Groningen and some Chinese cities have passed 50%. After congestion charging was introduced in London (UK), cycling has increased substantially. As oil prices rise, and people concerns about health mount, cycling is on the rise in many western societies

Many European governments actively promote cycling and so does the World Health Organisation and WorldWatch Institute and many more. The Environmental directorate of the EU published the booklet "Cycling: the way ahead for towns and cities" in 1999. Increased cycling reduces congestion. In some cities with moderate levels of cycling ( say 5-8%), it is estimated that congestion would worsen severely if all cycle trips would be replaced by car-trips. If public transport is at or near full capacity, the same holds true there.

Increased cycling is generally very beneficial to traffic safety. Experienced, adult cyclists are ofen as safe or safer even on an idividual level than in a car, according to "Cycling the way ahead for towns and cities"

The bike is often fast and predictable in settings where congestions is rampant and distances short. (Going by car is ofen slower in many European cities than cycling, that is near city centre and congested areas)

Again : Most will find cycling for daily errands much cheaper that paying for going to the gym or a swimmingpool. As the two activities of transport and exercise are combined, ofen time is saved. If many instances money is saved by paying less for public transport, buying less petrol, perhahps a lower insurance and mortages on (the) car(s). The money thus saved can sometimes be compared to or even converted to the time taken to earn that money

Increased levels of cycling are conducive to equity : Both gender and income-equity.

It has been claimed that programmes to reduce car dependence, and improve conditions for pedestrians and cyclists, can reduce crime, as exemplified by the experience from Bogota, Colombia (Reforms carried out by mayor Enrique Penalosa, and his predecessor)

Cyclists are accessible for communicating with. They are not boxed in, stuck in traffic or dashing past, so one can ask directions etc. The proportion of humans to metal boxes in the environment of citizens increases, and most people will perceive the town, city or village to be more alive and agreeable.

There are many organisations worldwide whose primary mission is to advocate these goals. Most are non-profit organisations supported by donations, membership dues, and volunteers.