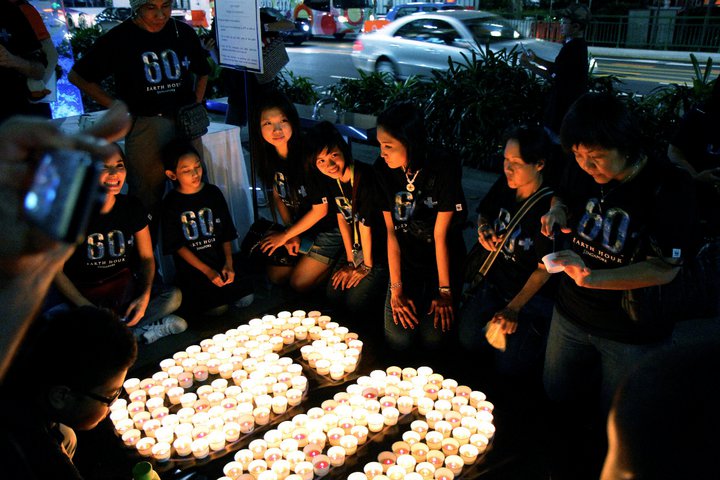 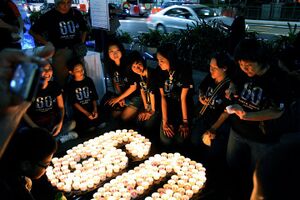 Singapore is a densely populated island city South-East Asia which stands out in its region for its approaches to transport and urban planning, and resulting clean air, and cool and pleasant environment.

High-rise development across the island has been used as a way to conserve the space taken up by housing, and increase the area covered by trees and plants. The effect of this on reducing the Urban Heat Island effect is very noticeable, compared to other cities in the region. In recent years flowers have been planted in many areas of public space and alongside roads.

The public transport system is extensive, efficient, and affordable and cars are discouraged through very high taxes. Thus the incentive structure is such to minimize traffic jams in spite of the wealth of the city, and result in heavily utilized public transport.

Singapore ( (listen)), officially the Republic of Singapore, is a sovereign island country and city-state in maritime Southeast Asia. It lies about one degree of latitude (137 kilometres or 85 miles) north of the equator, off the southern tip of the Malay Peninsula, bordering the Strait of Malacca to the west, the Singapore Strait to the south, the South China Sea to the east, and the Straits of Johor to the north. The country's territory is composed of one main island, 63 satellite islands and islets, and one outlying islet; the combined area of these has increased by 25% since the country's independence as a result of extensive land reclamation projects. It has the third highest population density in the world. With a multicultural population and recognising the need to respect cultural identities of the major ethnic groups within the nation, Singapore has four official languages: English, Malay, Mandarin, and Tamil. English is the lingua franca and numerous public services are available only in English. Multiracialism is enshrined in the constitution and continues to shape national policies in education, housing, and politics.

The Kranji Marshes is a nature reserve in the northwest area of Singapore. The 54-hectare site includes woodland and wetlands. Nature Society (Singapore) adopted the stretch of wetlands in 2008 and supported by sponsorship carried out a restoration program in cooperation with PUB and NParks. It was in 2005 that the area was recategorised as a park and named "Kranji Marshes Park". The parkland was opened to the public on 1 February 2016.[2] The area is home to a number of endangered birds, and at least 170 species have been recorded. W

Singapore's urbanisation means that it has lost 95% of its historical forests, and now over half of the naturally occurring fauna and flora in Singapore is present in nature reserves, such as the Bukit Timah Nature Reserve and the Sungei Buloh Wetland Reserve, which comprise only 0.25% of Singapore's land area. In 1967, to combat this decline in natural space, the government introduced the vision of making Singapore a "garden city", aiming to improve quality of life. Since then, nearly 10% of Singapore's land has been set aside for parks and nature reserves. The government has created plans to preserve the country's remaining wildlife. Singapore's well known gardens include the Singapore Botanic Gardens, a 161-year-old tropical garden and Singapore's first UNESCO World Heritage Site.

The Bukit Timah Nature Reserve (abbreviation: BTNR) is a 1.7-square-kilometre (0.66 sq mi) nature reserve near the geographic centre of Singapore, located on the slopes of Bukit Timah Hill, the country's highest natural peak standing at a height of approximately 165-metre (541 ft), and parts of the surrounding area. The nature reserve is about 15 kilometres (9.3 miles) from the Downtown Core, Singapore's central business district (CBD).

Together with the neighbouring Central Catchment Nature Reserve (CCNR) in close proximity, it houses over 840 species of flowering plants and over 500 species of fauna. Today, it is one of the largest patches of primary rainforest left in Singapore. The forest reserve was formally declared as an ASEAN Heritage Park on 18 October 2011.

Singapore May Have Designed the World's Best Bus Stop, Mar 1[1]

First Car Free Sunday in the central business district to be celebrated with mass events in Singapore. Feb 28[2]

Look at how much e-waste Singapore has saved from the landfill, September 17[4]

Page data
Retrieved from "https://www.appropedia.org/w/index.php?title=Singapore_community_action&oldid=656287"
Cookies help us deliver our services. By using our services, you agree to our use of cookies.
Categories:
About Appropedia · Policies · Contact · Content is available under CC-BY-SA-4.0 unless otherwise noted.