From Appropedia
Redirected from Portland 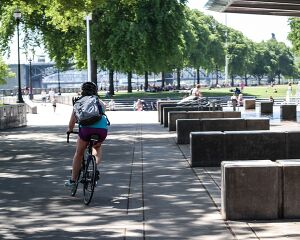 Portland (, PORT-lənd) is a port city in the Pacific Northwest and the largest city in the U.S. state of Oregon. Situated at the confluence of the Willamette and Columbia rivers, Portland is the county seat of Multnomah County, the most populous county in Oregon. As of 2020, Portland had a population of 652,503, making it the 26th-most populated city in the United States, the sixth-most populous on the West Coast, and the second-most populous in the Pacific Northwest, after Seattle. Approximately 2.5 million people live in the Portland metropolitan statistical area (MSA), making it the 25th most populous in the United States. About half of Oregon's population resides within the Portland metropolitan area.

The city became a pioneer of state-directed metropolitan planning, a program which was instituted statewide in 1969 to compact the urban growth boundaries of the city. Portland was the first city to enact a comprehensive plan to reduce carbon dioxide emissions.

Historically, environmental consciousness has weighed significantly in the city's planning and development efforts. Portland was one of the first cities in the United States to promote and integrate alternative forms of transportation, such as the MAX Light Rail and extensive bike paths. The Urban Greenspaces Institute, housed in Portland State University Geography Department's Center for Mapping Research, promotes better integration of the built and natural environments. The institute works on urban park, trail, and natural areas planning issues, both at the local and regional levels. The city's longstanding efforts were recognized in a 2010 Reuters report, which named Portland the second-most environmentally conscious or "green" city in the world after Reykjavík, Iceland. W

In October 2009, the Portland City Council unanimously adopted a climate action plan that will cut the city's greenhouse gas emissions to 80% below 1990 levels by 2050. W

From Wikipedia:Portland, Oregon § Parks and recreation

Parks and greenspace planning date back to John Charles Olmsted's 1903 Report to the Portland Park Board. In 1995, voters in the Portland metropolitan region passed a regional bond measure to acquire valuable natural areas for fish, wildlife, and people. Ten years later, more than 8,100 acres (33 km2) of ecologically valuable natural areas had been purchased and permanently protected from development.

Portland is one of only four cities in the U.S. with extinct volcanoes within its boundaries (along with Pilot Butte in Bend, Oregon, Jackson Volcano in Jackson, Mississippi, and Diamond Head in Honolulu, Hawaii). Mount Tabor Park is known for its scenic views and historic reservoirs.

Forest Park is the largest wilderness park within city limits in the United States, covering more than 5,000 acres (2,023 ha). Portland is also home to Mill Ends Park, the world's smallest park (a two-foot-diameter circle, the park's area is only about 0.3 m2). Washington Park is just west of downtown and is home to the Oregon Zoo, Hoyt Arboretum, the Portland Japanese Garden, and the International Rose Test Garden. Portland is also home to Lan Su Chinese Garden (formerly the Portland Classical Chinese Garden), an authentic representation of a Suzhou-style walled garden. Portland's east side has several formal public gardens: the historic Peninsula Park Rose Garden, the rose gardens of Ladd's Addition, the Crystal Springs Rhododendron Garden, the Leach Botanical Garden, and The Grotto.

Portland's downtown features two groups of contiguous city blocks dedicated for park space: the North and South Park Blocks. The 37-acre (15 ha) Tom McCall Waterfront Park was built in 1974 along the length of the downtown waterfront after Harbor Drive was removed; it now hosts large events throughout the year. The nearby historically significant Burnside Skatepark and five indoor skateparks give Portland a reputation as possibly "the most skateboard-friendly town in America."

Tryon Creek State Natural Area is one of three Oregon State Parks in Portland and the most popular; its creek has a run of steelhead. The other two State Parks are Willamette Stone State Heritage Site, in the West Hills, and the Government Island State Recreation Area in the Columbia River near Portland International Airport.

Portland's city park system has been proclaimed one of the best in America. In its 2013 ParkScore ranking, the Trust for Public Land reported Portland had the seventh-best park system among the 50 most populous U.S. cities. In February 2015, the City Council approved a total ban on smoking in all city parks and natural areas and the ban has been in force since July 1, 2015. The ban includes cigarettes, vaping, as well as marijuana.

Bike sharing for all with Adaptive Biketown[edit | edit source]

Biking has become a way of life in Portland and many other cities around the world. Riders enjoy reduced transit costs, health benefits, and social opportunities. In most cities, however, these benefits are only accessible for those who can ride traditional bikes, or the physically disabled who can afford special bikes. In Portland, riders lobbied the city government to think about disabled riders in designing a bike-sharing system.

The city will eventually offer adaptive bikes for the physically disabled as part of the 1,000-bike and 100-station bike sharing system that launched in July 2016. The city first conducted a series of interviews with disabled riders to understand their needs. They found that, in addition to needing a variety of adaptive bikes, disabled riders often required storage options for wheelchairs and assistance at bike share stations. Adaptive bikes are designed to fit the needs of individual riders. Some are designed with three wheels to accommodate riders who have trouble balancing. Others are heavy duty to accommodate larger riders or offer hand pedals for riders with limited or no lower body mobility. During the interviews, officials discovered that disabled riders were looking to ride for exercise and recreation, so it is crucial to offer more adaptive bikes and services near trails, rather than at commuter bike stations.

The adaptive bike program was scheduled to roll out in June, 2017. The city is holding or has held educational events, such as the adaptive bike clinic, and providing scholarships for biking classes, to ensure more people can enjoy the benefits of the forthcoming bike-sharing facilities.[1]

From Wikipedia:Cycling in Portland, Oregon

Bicycle use in Portland, Oregon has been growing rapidly, having nearly tripled since 2001; for example, bicycle traffic on four of the Willamette River bridges has increased from 2,855 before 1992 to over 16,000 in 2008, partly due to improved facilities. The Portland Bureau of Transportation says 6% of commuters bike to work in Portland, the highest proportion of any major U.S. city and about 10 times the national average.

Due to its urban bicycling efforts, Portland has earned multiple "bicycle-friendly city" awards, including being awarded platinum status by the League of American Bicyclists, and it ranked second in the CNBC's 2019 most bicycle-friendly cities in the US.

In July 2016, Portland launched a bike share program, named "Biketown" because of a naming rights deal with Nike, with 1,000 bikes and 100 stations. It is operated by Motivate. The new system logged more than 100,000 rides in its first two months of operation.

Kitchen appliances can be superfluous uses of money and cupboard space, especially for city residents with tight budgets and small homes. Yet interest in healthy eating is growing. More people are trying out unusual food preparation techniques, which can require unique appliances. Kitchen Share, launched in 2012, is a kitchen tool-lending library for home cooks in Portland, Oregon. It enables community members to borrow a wide variety of kitchen appliances such as dehydrators, mixers, and juicers. Members can check out over 400 items online using affordable lending library software from myTurn. With two locations in Portland, Kitchen Share helps residents save money, learn new skills from neighbors, and reduce their environmental footprint. As a nonprofit community resource for home cooks, Kitchen Share only asks for a one-time donation upon joining, providing affordable access to otherwise expensive and bulky items while building a more resource-efficient city. Learn about starting a lending library with this toolkit.—Marion Weymes[2]

Free Geek is a technology related non-profit organization based in Portland, Oregon, launched on April 22, 2000. It started as a public event at Pioneer Courthouse Square. In September 2000, it opened a permanent facility as a drop off site for electronic waste. In January 2001, local newspaper The Oregonian ran an article advertising their free computer program for volunteers, which became so successful that they had to start a waiting list. They currently have over 2,000 active volunteers per year.

From Wikipedia:Transportation in Portland, Oregon § Walking

According to a city video, in 1994 Portland became the first city to develop a pedestrian master plan. Blocks in the downtown area are only 200 feet (61 m) long. Many streets in the outer southwest section of the city lack sidewalks; however, this is partially made up with various off-street trails. A 2011 study by Walk Score ranked Portland the 12th most walkable of the fifty largest cities in the United States.

The Gibbs Street Pedestrian Bridge, a new pedestrian and bicycle bridge over I-5 near the Portland Aerial Tram, opened in 2012.

Skateboarding and roller blading are welcome methods for travel around town. Downtown Portland includes signs labeled "skate routes" to aid the urban skater. The Wall Street Journal stated Portland "may be the most skateboard-friendly town in America." W

Portland has a public transportation system. The bus and rail system is operated by TriMet, its name reflecting the three metropolitan area counties it serves (Multnomah, Clackamas, and Washington). Portland's rate of public transit use (12.6% of commutes in 2008) is comparable to much larger cities like Los Angeles, and higher than in most similarly sized U.S. cities, but is lower than in some others, such as Baltimore and Seattle. Transit service between Portland and Vancouver, Washington, the second-largest city in the metropolitan area, is provided by C-Tran, with a small number of express routes.

From Wikipedia:Transportation in Portland, Oregon § Other alternatives

Portlanders living downtown or in nearby neighborhoods have car sharing as an alternative, through Zipcar, which acquired Flexcar in 2007. As of 2017, there are over 5,000 members sharing 250 vehicles which are located in neighborhoods such as the Pearl District, Old Town Chinatown, the Lloyd District, Hawthorne, and Brooklyn.

Depave, asphalt and concrete removal from urban areas. Based in Portland, Oregon

Apr 6 Transformation — A Celebration of Depave

Arts and culture: Public Art PDX, free app showcasing the rich and diverse collection of Public Art on display in and around Portland

The Future of Portland's Skyline Is Made of Wood. Yes, Wood. Mar 20[3]

Portland is first U.S. city to make protection the default for all new bike lanes, January 28[5]

This Northwest City Just Passed The Strongest Resolution Against Fossil Fuels In The Country, November 13[6]

How an inspiring group of women built one of the greenest buildings in Portland, August 17[7]

Page data
Retrieved from "https://www.appropedia.org/w/index.php?title=Portland_community_action&oldid=657101"
Cookies help us deliver our services. By using our services, you agree to our use of cookies.
Categories:
About Appropedia · Policies · Contact · Content is available under CC-BY-SA-4.0 unless otherwise noted.