From Appropedia
Redirected from Freiburg 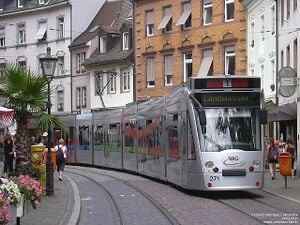 The German city of Freiburg is known for its high standard of living and advanced environmental practices.[1] Freiburg is also known as an "eco-city". The newly built neighbourhoods of Vauban and Rieselfeld were developed and built according to the idea of sustainability. The citizens of Freiburg are known in Germany for their love of cycling and recycling.[2]

At the centre of the old city is the Münsterplatz or Cathedral Square, Freiburg's largest square. A farmers market is held here every day except Sundays.[3]

Freiburg has an extensive pedestrian zone in the city center where no automobiles are allowed. Freiburg also has an excellent public transport system, operated by the city-owned VAG Freiburg. This is anchored by the Freiburg tramway network, together with feeder buses.[4]

In June 1995, the Freiburg city council adopted a resolution that it would permit construction only of "low-energy buildings" on municipal land, and all new buildings must comply with certain "low energy" specifications. Low-energy housing uses solar power passively as well as actively. In addition to solar panels and collectors on the roof, providing electricity and hot water, many passive features use the sun's energy to regulate the temperature of the rooms.[5]

In 2010, Freiburg was voted as The Academy of Urbanism's European City of the Year in recognition of the exemplary sustainable urbanism it has implemented over the past several decades.[6]

In Freiburg 79 percent of trips taken as a pedestrian, by bike, or by public transport.[7] Aug 20

Freiburg, Germany: is this the greenest city in the world? March 23[8]

Page data
Retrieved from "https://www.appropedia.org/w/index.php?title=Freiburg_community_action&oldid=656440"
Cookies help us deliver our services. By using our services, you agree to our use of cookies.
Categories:
About Appropedia · Policies · Contact · Content is available under CC-BY-SA-4.0 unless otherwise noted.