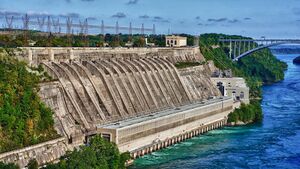 Hydroelectricity or hydroelectric power is electricity generated from the captured energy of moving water, be it from the sea, or from freshwater sources. It is an established and continuous form of renewable energy. It uses the natural water cycle, and gravity, to generate electricity.

The following mathematical formula allow to estimate the hydropower potential:

The efficiency of the turbine is a characteristic of the machine given by the manufacturer. This efficiency depends on the waterflow. Indeed, if the inflow is, for example, only half of the expected speed (or nominal waterflow), it is easy to understand that the piece of the waterflow that will run between the rotating parts and the fixed parts without reacting on the blades of the machine does little or nothing. So the effective waterflow drops sharply and leads to an efficiency drop.

The potential of a site can be improved if the hydroelectric equipment is not a hydroelectric facility along the water stream but equipped with an accumulation pond. In these circumstances it is possible to, for a few hours of the day, provide sufficient water flow for periods of greater consumption of electricity. When the population of the village sleeps, they generally consume much less electricity. This decrease in electricity requirements accompanies, through the speed regulator discussed above, a decrease in water consumption. The saved amount can be used at times of greater need. This accumulation pond should be considered in the context of a daily regulation. If deals around overcoming the insufficiencies of low water flows, the accumulation intake reaches a size that is outside the context of small power plants.

Converting these units, a common field equation to measure the maximum power available in a moving body of water is:

To find the actual power you will get from that moving body of water, calculate Pnet with the following changes made.

An installation, no matter how small, always includes the following elements (following the flow of water):

Other equipment that can be used is a sand trap on the feeder canal. The grains of sand that accompany the water in the turbine have an abrasive effect that reduces the life of the machine. The biggest materials (stones, bricks) have an even more destructive effect and gratings should be installed at the entrance to the intake line but also at the penstock to prevent such incidents.

It is difficult at first to estimate the effective electricity output since it depends on the project which is associated with the construction of the hydroelectric power plant. It is known that the provision of electricity promotes its use, without any regulation system of the consumption (limiting the amount available to the consumer via electrical switchboard and billing of the consumption). The lighting of offices is an important element for the development of the electricity grid, as well as the sponsoring of communication facilities such as the telephone network, operation of television channels and computers. The electrical energy is also useful to activate the cooling chain (storage of medicines, vaccines ...). Foremost, we must exclude, in the context of a micro-powerplant, the use of electricity as a means of heating because consumers will become prohibitive for the small network. To give a general idea however, an installed capacity of 2kW per family is a correct value to identify the power needs in a village community.[verification needed]

It is also possible to set, among the regular customers of a small network, priority clients such as those that manage a cooling chain for vaccines and drugs, or a surgical hospital. These customers will be supplied as long as possible. These provisions should be exposed to all users as a way to maintain cohesion and avoid conflicts. This regulating system allows to supply electricity to more customers but for a more limited period.

A large scale hydroelectric power plant forces water, generally held in a dam, through a hydraulic turbine connected to a generator. After the water exits the turbine it returns to the stream or river below the dam.

Because of the dependence on gravity, hydroelectric power is generally more feasible in mountainous regions than in flat country.

There are three different types of hydroelectric power plants, impoundment, diversion and pumped storage. An impoundment system is the most common type and uses the whole width of the river to generate power. A diversion also known as "run-of-river" hydro power plant diverts a portion of the water to generate power but does not require a dam. Part of the water is diverted through an intake before the water falls or drops significantly either by a waterfall or a loss in head. That water then runs through the system and through the turbine and then leaves through the outtake. A pumped storage system is compared to a battery because it stores the energy by pumping the water uphill to a reservoir that has less head. When there is less demand for energy this storage facility pumps the water from a lower reservoir to the upper reservoir. When there is high demand for energy the water is then pumped back down from the high reservoir to the lower reservoir to compensate for the energy demand.

Hydroelectricity has relatively low operations and maintenance costs, especially compared to other forms of renewable energy.

Today, to transform hydropower to electrical power, it is possible to construct very large but also small-sized plants. This article lists the parameters to determine small hydroelectric facilities. They have a place in the process of the development of small communities and in the process of sustainable development because of the economy in terms of CO²-emissions. See http://www.kuleuven.ac.be-ei-public-publications-EIWP900-09_fr.pdf

The technical literature considers small power plants, those plants that generate a power output less than 2000kW or 2 MW. The small power plants are divided into mini power (maximum power output 500kW), micro-power (maximum power output of 100 kW) and pico-power (0.2 kw to 5kW). These powers outputs are to be considered as orders of magnitude because, depending on the country or region, different figures have been cited. The pico-plants have been installed mostly in Asia, Vietnam (120,000) and the Philippines.

In developing countries, the potential for small hydropower installations has never carefully been measured. Past surveys of hydropower potential have focused on possible sites for large dams, as small hydroelectric units were considered un-economical or ill-suited to the goal of providing large blocks of electric power for cities, industrial estates, or aluminum production. With the rapidly increasing costs of energy, however, the economics are now much more favorable for small hydroelectric units, which are also well-suited to the needs of small rural communities, and do not bring the degree of environmental disruption associated with large reservoirs. Many small units do not require reservoirs at all, and use small diversion canals instead. With climate change becoming more of a threat the necessity for increasing renewable energy usage around the world is very important. Bringing electricity to rural communities is also becoming more prudent so through installing micro-hydro plants this could become possible(depending on the access to a river or stream).

The success of waterpower installations can be greatly affected by forest conservation practices in the watershed above. Rapid deforestation brings high rates of soil erosion and subsequent rapid silt filling of reservoirs behind dams. At the same time, greater rain runoff causes increasingly violent floods that threaten hydropower installations. During the months following the floods, low water flows are likely to reduce generating capacity. A program to protect the watershed and the construction of a diversion canal may be necessary to prevent damage to a small waterpower installation.

The Chinese authorities have helped a great amount of areas removed or isolated from major electricity distribution networks in acquiring small powerplants. Similar projects have been developed, especially in Kenya.

These measures allow the local population to develop activities that meet their expectations and to avoid, for example, migration to the already congested suburbs of major cities. These populations can emerge from the isolation, communicate with the rest of the world and participate in the evolution.

Use of hydroelectricity[edit | edit source]

From backyard, single resident systems made from recycled car parts, to grand scale projects such as those on the Colorado river in the western United States, people are generating energy of water moving down a gradient. The size and therefor, application, of a hydroelectric system can vary widely.

Use in P.R. of China[edit | edit source]

The use of water power in the People's Republic of China has reflected the same pattern, with first water wheels and then turbines being built in great numbers as power demands increased along with technical production capabilities. By 1976 an estimated 60,000 small hydroelectric turbines were in operation in South China alone, contributing a major share of the electricity used by rural communes for lighting, small industrial production, and water pumping.

With the rising cost of energy in the United States today, small hydroelectric units are returning in large numbers. Generating stations along New England rivers are being rehabilitated and put back into operation. The number of companies making small waterpower units has jumped. The U.S. Department of Energy has estimated that 50,000 existing agricultural, recreational, and municipal water supply reservoirs could be economically equipped with hydroelectric generating facilities.

Use of hydroelectric plants depending on size[edit | edit source]

Please note that these are averages, many different communities classify hydropower somewhat differently.