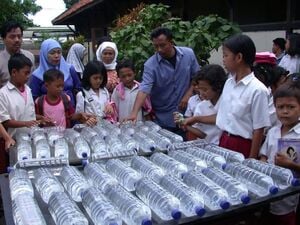 Salt and sunlight can actually be used to clean water with the SODIS method.

This project will focus on methods to decrease turbidity in source water prior to treatment by solar water disinfection (SODIS). It is based on preliminary experiments performed for the design of a low-cost filter unit for pre-SODIS treatment. This new study explores the use of a natural agent to facilitate coagulation-flocculation and settling of particles.

Abstract
Solar water disinfection (SODIS) has proven to be effective at reducing diarrheal incidence in epidemiological intervention studies. However, the SODIS method is limited to waters of low turbidity (<30 NTU). This study investigates the use of common table salt (NaCl) to reduce the turbidity of water containing suspended colloidal clay particles for use in the SODIS method. Three representative clays found in tropical soils (kaolinite, illite and bentonite) were tested at three levels of turbidity (50, 100 and 200 NTU) for their flocculating behavior with multiple NaCl concentrations to find the optimum. Supernatants were tested for sodium concentration for comparison against health and taste thresholds. Results show that unlike kaolinite and illite, pure bentonite solutions were shown to be very responsive to NaCl and produced supernatants with as low as 4 NTU (98% particle removal efficiency). This study has shown that NaCl, in combination with high-activity clay particles in solution, may effectively reduce turbidity to levels suitable for SODIS treatment, thereby expanding the number of people who can utilize the technology effectively.

Over a billion people around the world do not have access to clean, safe drinking water and over 2.4 billion people do not have access to water for sanitation purposes. This puts these people - who are concentrated in the global south - at risk for waterborne diseases as a result of enteric microbial content. These pathogenic viruses, bacteria, and parasites (largely of fecal origin) are considered one of the biggest threats to human health in developing countries.

All of this calls for access to clean water for drinking and sanitation purposes. The World Health Organization, the United Nations, and Red Cross all advocate for the implementation of low-cost treatment at the household level as a means of providing water that is free of the enteric microbes associated with waterborne diseases. By providing safe water alone, diarrheal and other enteric diseases can be reduced by 6 to 50%; the challenge remains in offering simple, sustainable treatment methods that are appropriate for the user at the household level.

Treatment of water by solar water disinfection (SODIS) has been tested in both epidemiological and microbiological studies and is considered an appropriate technology for treatment of water at the household level. The combination of ultraviolet radiation and heat is highly effective at disinfecting water, though the technology is significantly limited to clear water (turbidity of <30 NTU). For the considerably large number of people who collect water from sources affected by overland flow, erosion, and pollution, SODIS is not a viable treatment option. There is therefore significant need for a method to reduce turbidity prior to solar treatment for efficient inactivation of microbes.