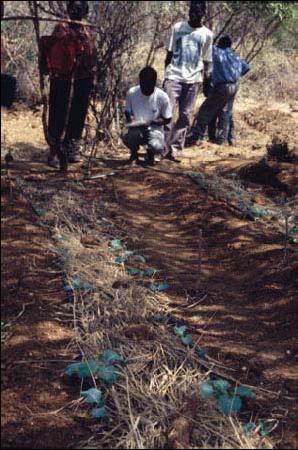 Conventional irrigation systems, such as channel irrigation and wild flooding tend to waste water as large quantities are supplied to the field in one go, most of which just flows over the crop and runs away without being taken up by the plants.

Micro irrigation is an approach to irrigation that keeps the water demand to a minimum. It has been driven by commercial farmers in arid regions of the United States of America and Israel in farming areas where water is scarce.

Typically, these commercial irrigation systems consist of a surface or buried pipe distribution network using emitters supplying water directly to the soil at regular intervals along the pipework. They can be permanent or portable.

Many parts of the world are now using micro irrigation technology. The systems used by large commercial companies are generally quite complex with an emphasis on reducing the amount of labour involved.

Small-scale farmers in developing countries have been reluctant to take up micro irrigation methods due to the initial investment required for the equipment. A number of organizations have looked at ways to simplify and reduce the cost of micro irrigation resulting in the approaches of drip irrigation and pipe irrigation. For these small-scale irrigation systems not only should the technical aspects of the system be considered such as:

The social aspects should also be of concern to ensure the irrigation system will be of benefit. The social and economical factors will include:

Drip irrigation uses low-cost plastic pipes laid on the ground to irrigate vegetables, field crops and orchards. This technology was developed in the 1960s for commercial use. Circa 1990 a US firm called Chapin Watermatics developed a low-cost system called bucket kits, which use standard plastic buckets and lengths of hose that could be cut to the appropriate lengths.

Small holes in the hose allow water to drip out and keep the base of the plant wet without wasting any water. The kits are low-cost, easy to assemble and manage. They do not need high quality water, providing the water is filtered. A 20 litre bucket with 30 metres (100 feet) of hose or drip tape connected to the bottom. The bucket is placed at least 1 metre (3 feet) above the ground so that gravity provides sufficient water pressure to ensure even watering for the entire crop. Water is poured into the bucket twice daily and passes through a filter, fills the drip tape and is evenly distributed to 100 watering points. The multi-chambered plastic drip tape is engineered to dispense water through openings spaced at 30cm (12 inches). 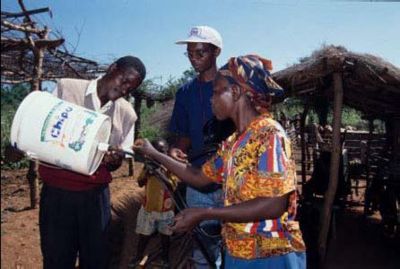 Two bucket kits costing around $20 will produce enough vegetables for a family of seven and can last over five years. The system is most suited to kitchen gardens. As well as the bucket, you will need several strong poles, tools, manure, water and vegetable seedlings. The poles are used to make a support structure for the bucket. The stand should hold the bucket about 1 metre above the ground. The main stages of setting up the systems are:

The whole procedure of setting up the system will only take about one hour, including the construction of the bucket support. When planting a seedling is planted at each wet spot so that all the moisture is absorbed directly by the plant roots. Moving the kit from plot to plot tends not to be very practical and damages the equipment. It is better to add extra buckets and lines when necessary or when funds are available to invest in additional equipment.

Some initial training is required to show how to get the best results from the system and careful attention should be taken to a number of common problems that occur with the system comprising of:

The bucket kit is the smallest type of drip irrigation available. Although productivity is increased providing greater food security and improved nutrition, the amount of water and labour saved is small. Often there is not sufficient surplus produce for users to sell and provide financial benefits.

A research project on Affordable Micro Irrigation Technology (AMIT) was conducted by Intermediate Technology Consultants (ITC) and International Development Enterprises (IDE) in India and Zimbabwe. The looked at the constraints to adoption of low-cost, improved, drip irrigation technologies by poor farmers. The findings are available on ITC's website. 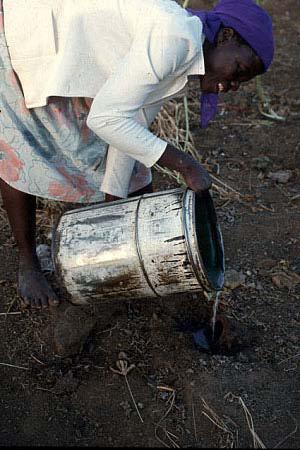 Figure 3: Water is poured into the pipe which then irrigates the plants at the roots (copyleft Barbara Bryant/Practical Action)

The use of buried clay pitchers is an ancient technique of subsurface irrigation. The use of clay pipes had been initially tried in Russia and Mexico. ITDG Southern Africa along with others in Zimbabwe developed a low cost variation of this irrigation method in which clay pipes were buried beneath vegetable beds of the 450 women members of garden groups.

One end of the pipe is blocked and the other is tilted out of the soil to allow filling. The pipes were laid end to end below the soil surface. When the pipe is filled, water will gradually escape from the cracks between the pipe sections and through the pores in the clay to provide a continuous supply of water to the vegetables.

There were difficulties in obtaining the correct dimensions. Research at the Lowveld Research Station, Zimbabwe found that the optimum pipe size was 75mm inside diameter and 300mm long.

The pipes are produced using a mould made from a plastic drainpipe with handles attached. The clay is prepared by rolling it out to a suitable size and thickness before it is put into the mould. Once it has been fitted to the mould the pipe can be removed and stood on end to dry naturally. The pipes are fired in an open fire.

Although the pipes are still laborious to fill by bucket, the use of clay pipes reduced the work for the women because the vegetable gardens needed to be watered only once a week instead of 3-4 times. Watering was said to be reduced by 50% and vegetable production increased.

The main benefit of the clay pipe approach is that the pipes were manufactured by the women, who ran the vegetable garden, without any external input. The disadvantages are that it is a long and laborious task to produce, that the installation of clay pipes has to be carried out every season, and the pipes are easily broken during garden operations.