From Appropedia
Redirected from Poor 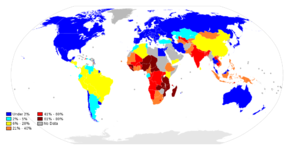 Percentage of the population living on less than $1.25 per day

Percentage of the population living below the national poverty line

Poverty is the state of being without adequate life support services[1]. Most often, poverty is a result of being unemployed, or without unemployment benefits.

The financial limit under which someone is labeled as being "poor" does not exist. Depending on the country, there is a "national poverty line". These differ greatly from one country to another. Although commodity prices (ie for food, ...) also fluctuate between countries, and although heating may also be not needed as much depending on the country, the numbers do not explain such great differences in the amounts.

Some argue that the local poverty in some developing countries has been a result of (the end of) colonialism. In many cases however, colonialism has in fact improved the local economy (as foreign companies and together with it, foreign knowledge and craftsmanship) have then started to enter the country). It is true however that once the colonial powers exited the country, the economy declined as much knowledge/expertise left.

Another issue that is often brought up is that the colonial powers have sold precious minerals and even people/workforce that were present in developing countries. Again this is true, but before the colonial powers entered the country, many of these minerals, ... were not yet actively being mined, so it can hardly be said that they sold anything that wasn't theirs to sell.

Finally, also mentioned is ineffective aid. While this is a valid point, it can be argued that the main issue of poverty is often found locally.

Ineffective governments are hence often of greater concern. Most often, poverty can be attributed to lack of (many) or (good quality) products sold on the market, and bad infrastructure/transport.

Unfair trade is often also mentioned quite often. However, in a properly functioning marketplace, there is no need of something called "fair trade". If agricultural and other subsidies were not provided, fair prices would exist for anyone buying/selling on the market. The Doha rounds organised by the WTO have the capacity to correct this - unfortunately, vested interests in member nations make this unlikely.

One aspect needing greater attention and action by the WTO is agricultural subsidies. Making the use of agricultural subsidies illegal apart from very specific, limited circumstances (or at least equalising them between nations) would be an important step towards fairer trade. As part of this, more effective enforcement and/or the use of penalties to offset the damage done by these subsidies would be beneficial in relieving the pressure on poor communities. The USA has been ordered by the WTO to cut its agricultural subsidies, but due to its economic strength and domestic political pressure, it has opted to pay the imposed penalties and continue to subsidise.[2][3]

In addition to the global market mechanism, it also pays to look at the internal structure. For example, in the chains (ie food production, ...), we often find that the primary producer of a product (and who thus actually provides the most work) is often paid the least. People that process a product and or sell it often receive far [[Wikipedia:Intermediate_good|greater profits]. Finding solutions on how to spread the revenue more evenly over everyone involved is thus a better solution than focusing on the global market mechanism itself. Besides spreading the revenue more evenly, a shortening of the chain may also be beneficial.

In The Nature of Mass Poverty by J.K. Galbraith, the author discusses and compares cultures where people "accommodate" to their conditions, and accept their poverty. In cases where this "accommodation" is broken, through education or dislocation through social change or emigration, or exposure to external influences (e.g. railways in Punjab, India he argues that people tend to see opportunities, be less influenced by perceived limitations, and find ways to work their own way out of poverty.