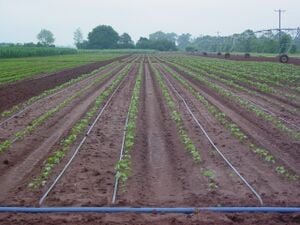 A peanut field with drip irrigation. In this example, pipes laid on the surface.

Drip irrigation is irrigation through small tubes targeted to the roots of the plant. It is the most common form of micro irrigation.

Irrigation originated with the diversion of streams and portions of rivers to a crop field. Water was then distributed throughout the crops by means of furrows oriented downgrade. This system uses gravity to move water to all the plants. The method was often referred to as flood irrigation because irrigation events would flood crop fields. Radical changes to irrigation did not occur until the industrial revolution in 1760 made combustion and electric engines available to mechanically increase water pressure.[1] Artificial water pressure allows water to be distributed to crops regardless of gradient. Drip irrigation systems can be used with artificial water pressure or gravity induced water pressure systems. Subsurface drip irrigation was developed in Germany during the 1860s and began using porous pipes in the 1920s in both German and Russia.[1] Farmers have largely avoided subsurface drip irrigation due to clogging of emitters and the difficulty of working on and maintaining a subterranean irrigation system. Surface drip irrigation became popular in the 1970s with Australia, the United States of America, and Israel being the primary leaders.

International Development Enterprises has promoted small shareholder use of drip irrigation in sub-Saharan Africa, principally because of the potential for increased yield of cash crops like fresh vegetables. International Crops Research Institute for the Semi-Arid Tropics (ICRISAT) has implemented more than 2000 drip irrigation systems in Niger. These efforts were paired with horticultural training and access to high-quality cash crop seeds. The initial program in Niger retained 60% of program participants after the first year. ICRISAT found that full-time farmers are significantly more likely to continue using drip irrigation. Burkina Faso and Ghana received similar training programs for drip irrigation, with attempts to alleviate initial investment costs by using one reservoir to supply water to several farmers' irrigation systems. It was reported that farmers doubled their income on average, using drip irrigation in conjunction with training programs and high quality seed stock.[2]

The principle behind drip irrigation seeks efficiency of water usage by directing water to the base of each plant to maintain soil moisture content as per the plant's needs. A series of pipes carry water from a central source throughout the field. Emitters allow water to drip from point sources along the pipelines at a slow rate, 2-8 liters per hour, directly to the base of the plants. The design of this system has numerous benefits, as discussed at the end of this section. Drip irrigation systems may be very simple, consisting of a water reservoir, a valve to control the flow of water, the main line and drip lines branching off of the main line, and emitters. Industrial drip irrigation systems can include a pressurized water source, backflow prevention valve, pressure gages, fertilizer solution tanks, filters, and an automated control system (Fig. 1) 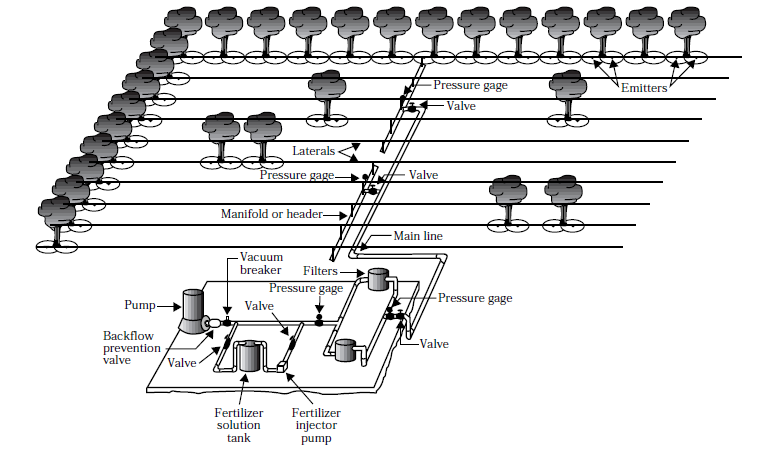 Typical components for a micro irrigation system include the reservoir, control valve, filter, main pipe, lateral pipe, and micro-tube/emitter. This type of system covers an area between 20 m2 and 1000 m2.[3] The layout of each drip irrigation system is highly variable, dependent on the crop and field. Many emitters exist with different methods of water impedance, including vortex, tortuous path, long path, and groove and disk short path. These may be viewed in Figure 2. Different designs attempt to provide the desired flow rate of water without allowing particles to clog the emitter from either the field or reservoir. 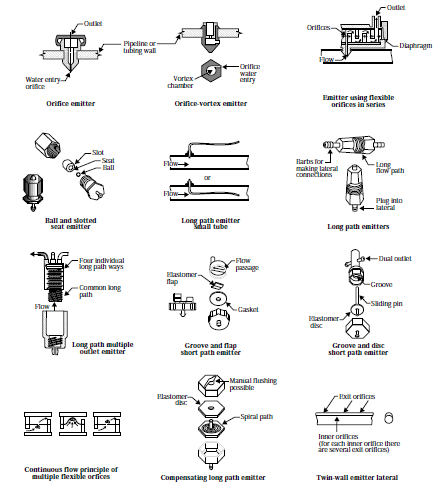 Irrigation efficiency is the quantity of water used by a crop in comparison to the quantity of water available for farm use. Furrow and other types of ground irrigation typically reach efficiencies of 34% with good water management practices, sprinkler irrigation efficiencies range between 50% and 75%, and drip irrigation has efficiencies between 75% and 90%. Drip irrigation is also capable of doubling crop yields with the same amount of water applied in comparison to sprinkler irrigation, and may use saline water in conjunction with fresh water without harming yield rates. Unlike traditional irrigation methods, the constant flow of water allows salt to be leached away from the root system of the plant.[1] The use of saline water can reduce the demand on fresh water in water-scarce regions, in addition to the doubling the amount of food grown with the same quantity of water.[4] 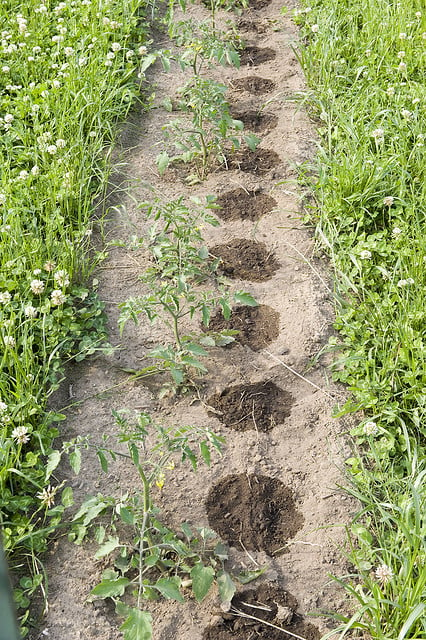 Water forms a circular pattern on the surface of the field and an onion-shaped volume beneath the surface of the field. Emitters are typically placed at such a distance that the wetted soil slightly overlaps, forming a row along lateral pipelines. Emitter spacing depends on the soil type, and the rate at which water moves through the soil. Typical emitter spacing is given in Should I Use Drip Irrigation, as well as a simple test to determine the best spacing based on the soil in a particular field.

Should I use Drip Irrigation?[edit | edit source]

The United States Department of Agriculture rates micro irrigation using emitters as more effective than traditional means of irrigation in the following soil conditions: low available water content, high infiltration rate, variable infiltration rate, highly erodible, steep & undulating topography, odd shaped fields, and stony or cobbly fields.[6] Drip irrigation is able to increase crop yields through low tension water availability, which simultaneously increases quality of the crops. Crops may also be grown in with higher salinity water due to the soil water's constant movement away from the root bulbs of the plants.[6] Micro irrigation technology is prone to clogging, due to the nature of small diameter emitters laying on the soil. Chemical buildup, soil particulates, and biological materials are sources of clogged emitters. Pests, such as rodents, may damage surface irrigation systems as well. Salts present in the soil surrounding the plant roots may move toward the roots if the soil is allowed to dry, or if the irrigation system is turned off during a light rain.[6]

The use of equipment makes drip irrigation more expensive than traditional irrigation techniques. Industrial drip irrigation systems in the United States cost around $1000 to $3000 per hectare. iDE provides smallholder irrigation kits, containing all the necessary equipment to construct a 20 to 1000 m2 irrigation system, for $10 to $20.[7] Drip irrigation can be advantageous for families to grow supplementary food in backyard gardens, allowing minimal water usage to produce fresh vegetables for added food security or income. Water management is required to achieve efficiencies of 90%, which includes altering the watering schedule based on the lifecycle of the plant.[7]

The irrigation system must be laid out with regard to the slope of the field and the even discharge of water along all emitter lines. The reservoir should be at the highest point of the field. If the field is undulating, the contours should be mapped to lay emitter lines parallel to level ground. One method for mapping contour lines is the The 'A' frame (Practical Action Brief) .

Where WU is water usage, Et is evapotranspiration, Kc is crop factor, Cp is canopy factor, and A is the area in m2. This allows the calculation of the water used from the soil by plants each day. The water irrigation then needs to match the outflow used by the plants and lost through evaporation. Evapotraspiration depends on the specific crop and its current growth stage. Crop appearance should not be used as the indicator for soil moisture conditions. Once crops become visibly malnourished, the yield has been irreparably damaged.

The amount of time the irrigation system needs to run each day is then WU divided by the flow rate of the emitters. Head loss in a line with multiple outlets, such as an emitter line, is

Where K is the friction factor, L is length of the pipeline, Q is the flow into the lateral lines, and D is the diameter of the pipe.[1]

1. Study installation sketch
2. Give layout for water tank / filter platform and trenches for pipes if required
3. Check components in the kit / material at site as per the list of materials in the user manual
4. Install water storage tank and filter on the platform
5. Connect filter to the water source / pump and the main line
6. Lay out the main line, sub-main and lateral pipes
7. Cover the pipe trenches if required
8. Place / fix the emitters / sprinklers (if microtubes require inflated lateral pipes then fill the pipes with water then punch holes and fix microtubes)
9. Start the pump / Open the valve and fill the pipes with water
10. Release all end caps / flush valves to clean the system of dirt
11. Check pressure and discharge and ensure all emitters are working
12. Operate according to schedule

The following troubleshooting table is given in the IDE irrigation manual.[3]

Solids suspended in the water may be filtered out. Finer filters will clean more particulates out of the system, but will clog up faster. Microorganism clogging has been recognized as a problem by the drip irrigation community, and short of using biocides, a solution is still being researched.[1] Chemical precipitation is most sever in the narrow massages of emitters, and is predominantly calcium carbonate. Traditionally, this chemical precipitate was cleaned by running an acidic solution through the lines in order to dissolve the basic compound. Recently, a form of bacteria called B. subtilis OSU 142 has been found to consume calcium carbonate without causing any biological buildup known to clog emitters. Flow rates increase by 20% affter application of B. subtilis OSU 142.[8] 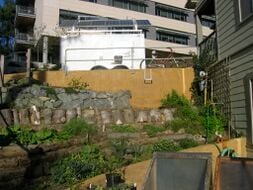 Page data
Retrieved from "https://www.appropedia.org/w/index.php?title=Drip_irrigation&oldid=669666"
Cookies help us deliver our services. By using our services, you agree to our use of cookies.
Categories:
About Appropedia · Policies · Contact · Content is available under CC-BY-SA-4.0 unless otherwise noted.