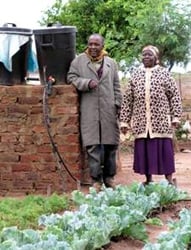 What used to be a patch of gravel behind the Makombe homestead in Musipami village is now a thriving 100-squaremeter garden of green leafy vegetables — a small miracle in a remote and overpopulated village in a country (Zimbabwe) suffering from a complex economic, political and agricultural decline. USAID helped Mr. and Mrs. Makombe install a drip-irrigation kit for their garden — one of 24,000 plots established with the lowcost systems. Designed to save labor and water, enhance nutrition and improve food security, the average drip-irrigation kit is easy to install. It uses far less water than traditional bucket-watering, which is inefficient, wasteful and difficult. Even after USAID training, some users were initially skeptical that their plants would get enough moisture. But as more and more kits were installed, communities became convinced when they saw crop yields increase with half the water and labor investment.

With agricultural production in Zimbabwe slashed due to chaotic land use practices, prices for staple foods are inflated, and out of reach for poor households. But for some, the surplus vegetables produced by drip irrigation have generated enough income to buy a year's worth of corn (maize), keep their children in school or buy basic medicines.

Larger kits have been installed at hospitals and community gardens, which serve significant numbers of people with HIV or AIDS, people who benefit the most from less labor and better nutrition. Being able to grow their own vegetables has also eased hospitals' financial burden, especially in remote areas far from suppliers and vendors.

A few months after the Makombes installed their irrigated garden, they hosted a field day at their homestead. More than 300 villagers, including two local chiefs, gathered to witness for themselves the results of the simple and inexpensive household garden kit. The Makombes were proud to show how they have become food secure, even in insecure times.