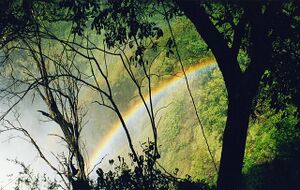 Clean Up the World weekend 2010: The Scout Association of Zimbabwe, with a membership of 27,000 young Zimbabweans across the country, will embark on a campaign against veld fires. The campaign will engage recently resettled farmers and aims to raise awareness of the detrimental impact of wild fires on the environment. Just one of the many National Scout Organizations who have joined Clean Up the World as a result of the Ally relationship with the World Organization of the Scout Movement.[3] September 15

2009 SEED Award Winners: "Bridge to the World". A small business, a research institution and an association of small-scale women farmers together are facing the challenge of improving rural livelihoods and reversing severe land degradation through innovative organic farming of essential oils, made from the indigenous Tarchonanthus camphoratus bush.[4] May 12

Large parts of Zimbabwe were once covered by forests with abundant wildlife. Deforestation and poaching has reduced the amount of wildlife. Woodland degradation and deforestation, due to population growth, urban expansion and lack of fuel, are major concerns and have led to erosion and land degradation which diminish the amount of fertile soil. Local farmers have also been criticised by environmentalists for burning off vegetation to heat their tobacco barns.

At the current rate of deforestation, Zimbabwe's natural woodland is expected to disappear by 2065. W