From Appropedia
Redirected from Israel 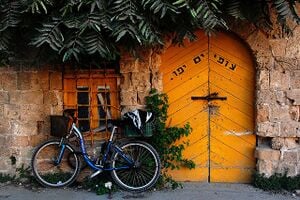 Israel (; Hebrew: יִשְׂרָאֵל, romanized: Yīsrāʾēl; Arabic: إِسْرَائِيل, romanized: ʾIsrāʾīl), officially the State of Israel (מְדִינַת יִשְׂרָאֵל, Medīnat Yīsrāʾēl; دَوْلَة إِسْرَائِيل, Dawlat ʾIsrāʾīl), is a country in Western Asia. It is situated on the southeastern shore of the Mediterranean Sea and the northern shore of the Red Sea, and shares borders with Lebanon to the north, Syria to the northeast, Jordan to the east, and Egypt to the southwest; it is also bordered by the Palestinian territories of the West Bank and the Gaza Strip to the east and west, respectively. Tel Aviv is the economic and technological center of the country, while its seat of government is in its proclaimed capital of Jerusalem, although Israeli sovereignty over East Jerusalem is unrecognized internationally.

Israel is notable for its water conservation technologies and agriculture in arid regions.

It is also notable for its kibbutzes, a form of intentional community.

From Wikipedia:Solar power in Israel

The use of solar energy began in Israel in the 1950s with the development by Levi Yissar of a solar water heater to address the energy shortages that plagued the new country. By 1967 around 5% of water of households were solar heated and 50,000 solar heaters had been sold. With the 1970s oil crisis, Harry Zvi Tabor developed the prototype of the solar water heater now used in over 90% of Israeli homes. There are over 1.3 million solar water heaters installed as a result of mandatory solar water heating regulations.

Israeli engineers have been at the cutting edge of solar energy technology and its solar companies work on projects around the world. However, even though Israeli engineers have been involved in both photovoltaic and concentrated solar power, the earliest Israeli companies which have become market leaders in their respective fields have all been involved in concentrated solar power. Some notable examples of this are BrightSource, Solel and Brenmiller Energy which all deal with utility scale projects. Additionally, Herzliya based SolarEdge has become a market leader in inverters for non-utility scale photovoltaic solar power.

In 2009, Israel found natural gas reserves within their exclusive economic zone which may reduce urgency of solar development. Solar technology in Israel has advanced to the point where it is almost cost-competitive with fossil fuels. The high annual incidence of sunshine in the Negev Desert has spurred an internationally renowned solar research and development industry. At the end of 2008, a feed-in tariff scheme was approved which has led to many residential and commercial solar energy power station projects.

From Wikipedia:Solar power in Israel § Farming and kibbutzim

Israel's first solar power station opened in August 2008. Moshe Tenne built the 50 KW plant on his Negev farm for NIS 1.3 million, and he expects to earn NIS 220,000 a year from selling excess electricity to the national power grid. After the National Infrastructures Ministry announced it would expand its feed-in tariff scheme to include medium-sized solar-power stations ranging from 50 kilowatts to 5 megawatts, Sunday Solar Energy announced that it would invest $133 million in photovoltaic solar arrays for installation on kibbutzim. In December 2008, the Sunday company announced that Kibbutz Reim in the western Negev would be the first community in the world to rely entirely on solar energy. The Reim installation, costing NIS 60-100 million, would generate at least 2.5 megawatts during peak consumption. Excess energy would be sold to the Israel Electric Company. The investment is expected to pay for itself in 10 years, and the costs and revenues will be divided evenly between the kibbutz and Sunday.

Tel Aviv has a growing network of bike paths, with more than over 360 kilometers (224 miles) existing or planned. W

Tel-O-Fun (Hebrew: תל-אופן Tel-Ofan; Arabic: تال أوفين) is a bicycle sharing service which is provided to the city of Tel Aviv, Israel by the private company FSM Ground Services Ltd. The service's main goal is to reduce motor vehicle traffic within the city. The project also aims to reduce air pollution, create a friendly atmosphere in the city, and encourage physical activity and fitness. The service name in English is a blend of the words "Tel Aviv" and the English word for pleasure "fun", in Hebrew the word "Ofan" (אופן) is wheel which is short for "Ofanayim" (אופניים) – Hebrew for Bicycle.

Ofnidan (Hebrew: אופנידן), or the Greater Tel Aviv Cycle Network, and sometimes transliterated from Hebrew as Ofneidan, is a infrastructure project under construction to establish a network of long-distance bike paths in the Gush Dan, Israel's largest conurbation and metropolitan area. The network will to connect residential areas and employment centers and reduce the use of motorised private transport and the resulting congestion and pollution. The project was first announced in 2015 and the plan originally included more than 145km of segregated bike paths.

The Israel Bike Trail is a trail for mountain bikers in Israel. When complete, the trail will extend over 1,200 kilometers across Israel, like the Israel National Trail, from Eilat to Mount Hermon. It will be composed of 27 segments, passing through Jerusalem, Tel Aviv, and the Golan Heights.

In December 2011, the Jewish National Fund opened a 32 kilometer dual-path bike trail that passes through the western portion of the Ben Shemen Forest and continues on through the Modi’in area.In December 2014, eight sections, spanning 400 km from Mitzpe Ramon to Eilat, were open for riding across the Negev desert.

From Wikipedia:Society for the Protection of Nature in Israel § Education

SPNI's education programs reach Israelis of every age and sector - over 50% of Israeli children and teens are involved in SPNI education programs! SPNI believes that by fostering young people's connection to the land, heritage and to their own communities, we grow a generation that gives back to Israel in establishing a strong society, concerned with preserving Israel's natural treasures for all time.

From Wikipedia:Society for the Protection of Nature in Israel § Ecotourism

SPNI is probably best known for its network of field schools, established adjacent to Israel's Nature Reserves and National Parks. Tens of thousands of Israelis and tourists participate in SPNI guided hikes and walks focusing on nature study. SPNI's Field School system combines three main areas of activity: education – teaching youth and adults about the region; conservation – protecting the region's natural environment; and research – gathering information about the region in conjunction with SPNI's various departments. Field Schools are an integral part of SPNI's operations, a focal area for local eco-activities, and play a leading role in Israeli environmental tourism and education.

English-language tours are offered by the Jerusalem Bird Observatory.

Land has become a precious commodity; the economic incentive for developers is highly enticing. SPNI, Society for the Protection of Nature in Israel is at the frontline, preserving the untouched land, still in its natural state, for wildlife, birds, and recreation, while promoting sustainable development, allowing residential areas to expand without clear-cutting the forests Israel has spent so many years planting. W

EcoPeace Middle East, formerly Friends of the Earth Middle East (?–2014), is a regional environmental peacebuilding organization in the Middle East, bringing together Jordanians, Palestinians, and Israelis to create shared solutions for the most water-scarce region on the planet.

One of EcoPeace's major efforts is a regional advocacy project to promote discussion and sharing of water resources. Its efforts are focused on the rehabilitation of the Jordan River, Dead Sea, Mountain and Coastal Aquifers and fostering awareness about the regional impact of climate change. EcoPeace's focal program, the Good Water Neighbors project, engages residents of all ages, mayors and municipal representatives in twenty five communities throughout Israel, Palestine and Jordan in a united effort to rehabilitate the regions' shared water resources.

Trempiyada (accent on the syllable -ya-) is Hebrew (טרמפיאדה, derived from the German trampen) for a designated place at a junction of highways or main roads in Israel from which hitchhikers, called trempists, may solicit rides. There are often many people waiting at trempiadas, and passing motorists often stop to pick them up. Trempiadas often also have bus stops at the same location.

Some scholars have pointed out the religious or spiritual connotation that hitchhiking carries in Israel. Nehemia Akiva Stern writing for the University of Pittsburgh argued that it's "almost exclusively practiced by religious Zionists, mainly youth...primarily within the West Bank" and that "in short, the practice of hitchhiking within the West Bank is a ritual of sacred travel."

Hiking is important in Israel, with over 9,656 km (6,000 miles) of trails. In May 2015, Google Street View, in cooperation with the Society for the Protection of Nature in Israel (SPNI), announced plans to photograph the full length of the 1,100 km (683 mi) Israel National Trail

Israel also has a share taxi service (Hebrew: שירות, sherut), run by several private companies, depending on location, in addition to regular taxicab services. The shared sherut service usually appears a yellow minivans and travel along the same path as the normal buses with identical route numbers. For a slightly higher price, the shared sherut service allows passengers to both hop on and hop off anywhere along the path of travel. During peak travel, often the time of travel can be shortened as the number of passengers is significantly small compared to normal bus services. Some routes continue to travel through the night and on Shabbat providing transport needs to the population when normal buses services cease. The beginning and end of the sherut vans may differ from the central bus station and on the weekends and evenings, the routes can also be altered for some services. In 2015, share taxis carried 34.7 million passengers, 15.2 million of which were transported on city routes, with the rest going to suburban and inter-city routes.

Eco-Community Centers – (in Hebrew known as MaLaShim, which is an abbreviation for "Merkaz Limudei Sadeh") – SPNI operates a network of about a dozen Environmental Community Centers primarily serving development towns with limited social services, whose populations face multiple difficulties such as unemployment and poverty. Malashim offer in-school and after-school fun activities that relate to the environment and nature, including occasional nature trips for the whole family. Over the past three decades, Malashim have become a vital part of local educational and extracurricular programming. Some Malashim bring together underprivileged Jewish and Arab children and some serve populations heavily affected by terrorism, for example in Sderot. W

5 community sharing projects in Israel and the West Bank, Jan 9 [1]

Let there be light: The inspiring story of solar power in Israel's Arava Desert, Jan 10 [3]

Bedouin village of Darajat gaining acclaim for its focus on clean energy,[6] June 24. "Most residents have solar water heaters and electric systems, the school is powered by wind and sun, and students learn hands-on about alternative energy by reading the power meters in their classrooms. The village also boasts a solar mosque."