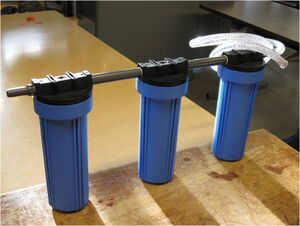 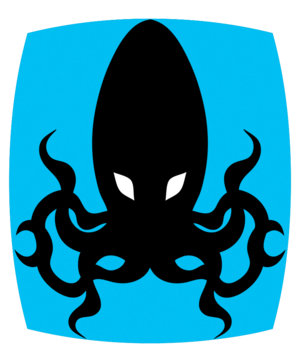 This page is about the Filter Commander 9000, a project made by The Pod People, a student team from an Engr215 class at Cal Poly Humboldt. The project started as a request for a water filtration system for the WaterPod project, and went through a five-stage design process before ending up as the Filter Commander 9000. This page is designed to show its progression from design to construction to use, and to present information for those who may want to replicate the system. 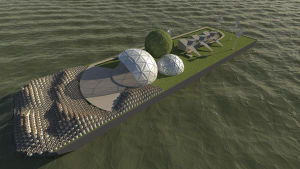 A rendered concept shot of the WaterPod barge.

The WaterPod Project started as a demonstration of a self-sustaining community, which would have a minimal environmental impact, and have its residents use sustainable methods of living. Their community is built entirely on a refurbished barge, and as such will be isolated from most modern utilities, such as the electrical grid and water supply. The barge itself will be located in the waterways of New York City, traveling to each borough and allowing visitors to observe the barge and its use of sustainable and appropriate technology. A majority of their potable water is from collected rainwater, and because of this they needed a proper filter to make it suitable for human consumption. The project to create the filter eventually produced the Filter Commander 9000.

The focus of the Filter Commander 9000 was to create a water filter for the WaterPod project, but within a set of limitations. The filter must be able to filter captured rainwater to a degree that it can be imbibed by humans with no ill health effects, and will also fit as many of the criteria as possible to an acceptable level. Combined with the requirements set forth by the WaterPod team itself, the following set of criteria were tabulated via Delphi matrix:

All of these criteria were taken in consideration for the Filter Commander 9000's construction.

After several drawing-board designs and many revisions, the result was the Filter Commander 9000: a series of three linked water filters with progressively finer and finer filters. Each filter is of a standard 10' size and housed within a plastic casing, between which water is pumped through lengths of 3/4" PVC pipe. The three filters were:

The exterior of the Filter Commander 9000 consists of three 10" filter housings (with 3/4" threading) connected by 6" lengths of PVC pipes, with an input and output nozzle installed on each end. One end is connected to the collected rainwater supply, the other is open for any available container or pipe for collecting the filtered water. Each filter is held firmly in place by brackets built into the lid and base of each filter housing.

The pressure needed to push water through the system was tailored to the WaterPod's specifications, and was provided with a pressurized water reservoir with a pressure of 50 pounds per square inch, which is more than enough to cause the system to function. Without it, gravity can provide enough pressure to filter the water, though at a drastically reduced rate.

During the design process, the Filter Commander 9000 was given a maximum cost ceiling of $225, under which the entire project's costs must fall.

The total cost for the Filter Commander 9000 came to $112.27, just under half of the maximum cost allowance. None of the parts were bought at any appreciable discount, and because they are standard parts these costs are about average for water filters and components online.

Overall, the Filter Commander 9000 met all of its project criteria, as well as meets NSF Standards for drinking water. The system has no moving parts and can be easily repaired and maintained by the residents of the WaterPod barge.

The system will be shipped in pieces, with its filters and their replacements included, to the WaterPod barge by the 1st of June, in time for the barge's maiden voyage. It will be constructed on-site.