From Appropedia
Redirected from Waterpod 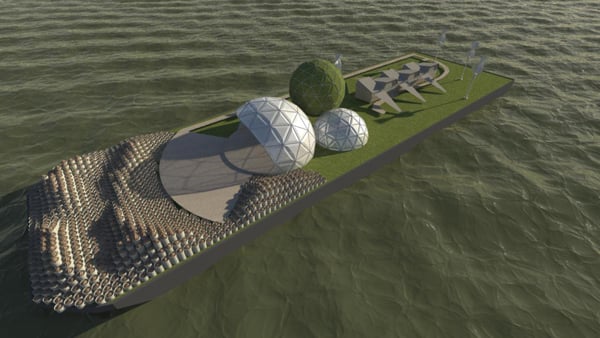 Waterpod™ is a floating sculptural living structure designed as a new habitat for the global warming epoch. It launched in New York July 2009, navigating down the East River, exploring the waters of New York Harbor, and stopping at each of the five boroughs docking at several Manhattan piers on the Hudson River.

As a sustainable, navigable living space, Waterpod™ showcases the critical importance of the environment and serves as a model for new living technologies. It illustrates positive interactions between communities: private and public; artistic and social; aquatic and terrestrial. Built from recycled and reused materials, Waterpod™ is structured as a triple-domed island for: (i) community and artistic activity; (ii) eco-initiatives including food grown with purified water from the Hudson River; and (iii) living space.

The Waterpod was built of wood, metal, plastic, fabric, and other materials on top of an industrial barge. Waterpod™ is structured as a triple-domed island, measuring approximately 120 feet by 40 feet. Construction materials will include salvaged pieces of sunken vessels raised from the river's bottom in the Rockaway and other areas. The main space (27 feet by 50 feet) is an amorphous shape dedicated to community and artistic activity including fine arts, performing arts, lectures, and workshops. Passengers will engage in navigation, mapping, recording, performing, art making, researching, and learning. The second spherical space (20 feet by 20 feet) includes space for hydroponic and vertical agriculture, greywater recycling, and alternative power sources. The third area (10 feet x 20 feet) includes a kitchen and bathroom, and the fourth contains five separate bedrooms. Waterpod™ will rely solely on its own power sources including a vertical wind turbine, solar PV panels, bicycle power, and a pico hydro system, set up to run all equipment on board including rotating art installations and a permanent projector illuminating the Waterpod's dome each night with curatorially selected images.

The Spring 2009 semester of ENGR215 Introduction to Design worked with the WaterPod to research, design, and build systems that foster the artists living sustainably onboard the barge.

The following 16 pages are in this category, out of 16 total.