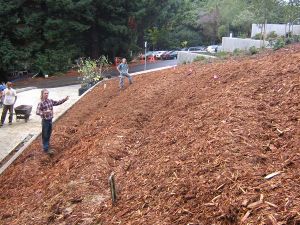 “A Swale is a ditch on the contour. It does not direct water, but holds it and allows it to gradually infiltrate the soil down-slope of it. Soil and water run-off are caught in the swale which becomes a fertile area. Gradual infiltration of water and nutrients and the dead roots of plants growing in the swale, slowly improve soil structure down-slope.”(Pipstar http://davesgarden.com/guides/terms/go/900/)

Our group project was to build swales on the north side of the CCAT property. Previous to our intervention the hill had little plant cover with mostly exposed clay. Knowing the Humboldt rains, CCAT was looking to have swales put in to prevent erosion and to turn the hill from barren clay to fertile soil where they could grow herbs. A walking path lined with trees was added to the design to tie together the BSS and CCAT sides of the hill. When we had originally assessed the hill and possible cost factors we had not yet been made aware of the planned path or the fact that the campus would be covering the hill in a rich layer of shredded redwood. We had originally budgeted up to $110 for plants, cover crops, and in case something came up, none of which were needed as the mulch helped to secure the hill and there was plenty of available rocks and dead trees around CCAT to reinforce the swales.

Our first step was to do research on swales and to talk with CCAT and work to meet their needs as well as make the most appropriate use of the hill. We met several times to discuss what needed to be done and to generate ideas as far as designs go. As the semester progressed we learned to use an A frame to make sure that the swales were contoured to the hill to make the swales more efficient. Next the group met up and used rocks to mark where the swales would be. Following this we met up two more times to do the actual construction of the swales. The first step was to move back the mulch and dig into the clay, as we dug into the ground we piled and packed the clay to the south side of the trench helping to deepen the swale. We used rocks and industrial concrete from the adjoining CCAT site to reinforce the wall. We found the need to use branches from up the hill to reinforce some areas of the swale as the hills steepness caused the clay to not want to stay in place. The combination of the branches and rocks seemed to do the trick in allowing us to create a sturdy wall. After each swale was completed the mulch was pulled back over the swales as well as into the trenches to help retain water on site and preventing erosion. The school will be putting in the walking path and trees and between their roots and the swales the hill should be able to return to its more natural state as a place of life instead of a hill of impermeable clay.

In evaluation of the appropriateness of this project we would say we met all our key goals. The swales were built on a steep hill that was eroding and will prevent this in the future. Local materials were used reducing if not preventing environmental damages. Redwood mulch was used, a native to the area, which will help to enhance the health of the soil. Also the retained water on site will nourish the trees helping to create a more stable ecosystem. We would recommend swales to anyone in a similar situation looking to keep rainwater on site and help to remediate the soil as well.

Page data
Retrieved from "https://www.appropedia.org/w/index.php?title=CCAT_trench_swales&oldid=598455"
Cookies help us deliver our services. By using our services, you agree to our use of cookies.
Categories:
About Appropedia · Policies · Contact · Content is available under CC-BY-SA-4.0 unless otherwise noted.