Drought is the most serious natural hazard facing Eastern Africa in terms of severity and frequency of occurrence. The most seriously affected areas are Arid and Semi Arid Lands (ASALS) that face frequent reduction of water or moisture to significantly below the normal or expected amount Pastoralists and agro pastoralists who occupy this vast region barely meet basic water requirements. Consequently they suffer from livelihood losses, hunger, diseases, conflict and internal displacements. The worst affected are women and children who may have to walk all day long in search of water.

Due to limited and unreliable rainfall most rivers are ephemeral seasonal sandy bed streams and only experience heavy water run-off for short periods of time after rain. During such periods of high flows, large quantities of sand are transported downstream while others get trapped on the upstream sides of rocks ledges along the stream. Such sand traps form natural aquifers that are capable of providing clean adequate water if well harnessed. Using appropriate technologies this can be exploited for water storage in the form of sand dams.

During the dry periods pastoralists and agro pastoralists get water for themselves and livestock by scooping into the sand beds of the dry streams at upstream sides of ledges cutting across the channel. Water in such sites is usually clean for drinking but quite finite and quickly gets depleted. Sand dams are an artificial enhancement of this traditional practice that puts extra water into these sand beds to recharge and store water for use. A concrete wall is constructed across the channel at specific sites to trap and hold back the sand during flooding; this creates an additional sub surface water bank for harvesting. With proper siting the total amount of water available in the sand dams can be over 6000m3. Sand dam technology is not new. In Kenya, it has been used with good outcome in Kitui, Machakos and Samburu districts. Other countries with similar dry environments such as U.S.A, Thailand, Ethiopia and Namibia have also used it in one form or the other. 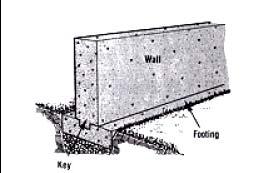 Figure 1. Section of the concrete wall

The first step is to carry out a site survey, which involves analysing the geological and physical characteristics of the site, especially the underlying rock structures and soil properties. Riverbeds with crystalline rocks and coarse sand have higher yield compared with volcanic rocks. Similarly, river valleys and regions sloping between 1 and 2% are ideal sites for sand dams as they normally give the highest water storage Knowledge of hydrological data is important for estimating the total stream flow, size of river transportation thereby influencing the thickness and height if the wall. Information on geological and topographical characteristics and even hydrological data can all be sourced from relevant Government departments.

The second step is to obtain the required tools and materials. Essential materials include waterproof Portland cement, nails, binding wire, timber, sand and stones, which are sometimes readily available along the riverbeds. Other equipment includes spade, sledge hammer, shovels, wheelbarrows, power mixer and water containers. Where stones are readily available, masonry sand dams are recommended; otherwise concrete walls are equally strong and durable. To construct sand dam a deep trench is first dug across the valley or stream, reaching the bedrock or other stable layer like clay. (See fig.1&2). To cut costs, local labour should be mobilized and involved in this process. A concrete or masonry wall is then built on the underlying rock bars across the river channels so that it can trap and hold back the sand brought by the river during flooding. The height may range between 2 to 5m high depending on the depth of the underlying rock or other stable layer.

At either end of the dam especially where the valley sides are flat wing walls may be added at an angle to the main dam to direct and confine the flows of channel as the sand stores water in its spores. Since the natural sorting and deposition of sediments in streams is a function of channel slope and the shape of channel cross section, channel geometry is quite important in sighting the prospective sand dam. While channel slopes may vary in different valleys and regions a slope of between 1 and 2% normally gives the highest water storage. (See Figure 2). The specific storage normally increases at the lower slopes than the higher ones. 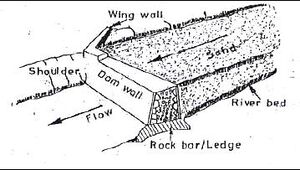 After the construction of a sand dam, a new channel cross section is created together with new gentler channel slope immediately upstream of the dam. The modified channel must safely pass the highest expected flood without overflowing the banks and threatening the bank abutments. In addition to rock outcrops for firm foundations, high riverbanks are another desirable feature. Where banks are low the dam has to be raised on either or both sides and wing walls extended beyond the banks in order to direct floodwater and prevent it from cutting around the dam.

Through proper sand dam sighting substantial volumes of water of up to 6000m3 would be available for domestic and agricultural use thereby solving the perennial water crisis experienced in ASALS. 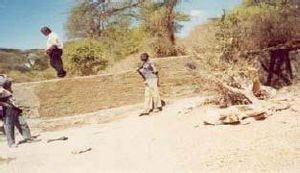 Sand dams are not new in Kenya. Traditionally water harvesting at certain points along the dry river has been widely practiced in ASALS with good results but on a smaller scale. Currently a number of sand dams have been constructed to good effect in Kitui, Machakos, and West Pokot. Practical Action EA through CORDAID funds recently built 3 sand dams along the seasonal Baragoi River in Samburu district and both have yielded good volumes of water for livestock and human use throughout the drought periods. (See figure 2).

Once construction is complete further operation costs are negligible. Only the low riverbanks need to be protected against erosion as this might enable floodwater to cut around the dam. The structure's lifespan is approximated at 30 years.

This technique is applicable in sandy riverbeds that are seasonally dry but experiences high siltation during water runoffs. Sites with high riverbanks and lower slopes are also desirable. 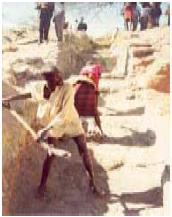 Where as standardized design and wall construction requires specialized advice to ensure it withstand the pressure from water behind it, local materials and skills should be preferred in order to foster community project ownership and to reduce projects costs. Proper consultations and consensus building among the stakeholders are requisite for winning the commitment, participation and contribution of the beneficiaries.

Compared to other water harvesting techniques, Sand dams are environmentally friendly as they control erosion and manage silt deposition within river basins. Its water is clean and of good quality for consumption due to filtering effect of the sand. Sand dams increase moisture infiltration within the soil profile and into the ground water providing both soil and water conservation benefits. These sites can witness quick regeneration of indigenous trees along the riverbanks thereby attracting other biological resources and ecosystems that hitherto faced threats from recurring droughts. Similarly sand dams also allow for small-scale crop production through irrigation that was otherwise not possible.

The technology is labour and physical capital intensive and most local communities cannot implement it without external aid.

Development of the Technology[edit | edit source]

Despite its cultural acceptability, this water harvesting technique has not been widely replicated in other deserving areas probably due to high costs of materials and labour involved and limited technical skills.

Water scarcity is perceived as the major bottleneck to development in the ASALS and innovative ways of rainwater harvesting are worthwhile. Sand dam technology that artificially enhances traditional water harvesting knowledge if well sited can bank of up to 6000m3 of clean water for domestic use thereby alleviating water shortages during drought periods. However, the geological characteristics run off patterns of the catchment and sediment transport regime of the river is prerequisite. Simulated river flow series can be used to estimate the size of flows likely to occur over a given period. Unfortunately hydrological data for most seasonal rivers are unavailable thereby rendering many predictions inadequate. For future development of sand dam technology, there is need to monitor rainfall patterns and install river-gauging structures along the streams.

Page data
Retrieved from "https://www.appropedia.org/w/index.php?title=Sand_dams&oldid=600938"
Cookies help us deliver our services. By using our services, you agree to our use of cookies.
Categories:
Maintenance categories:
About Appropedia · Policies · Contact · Content is available under CC-BY-SA-4.0 unless otherwise noted.