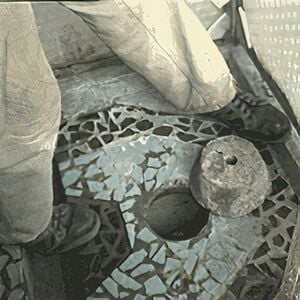 This is about the construction of Bathroom Toilet units affordably. It aims at improving sanitation in rural settings. This method is meant to be used in a communal project where inhabitants of a village can be motivated to build a private bathroom for every family around. To achieve this each family works on its own bathroom facility concurrently while sharing experience and guidance. A special construction method is used to permit this.

Properties of the Bathroom Toilet-unit

It is not clear how users should best be instructed on how to use the toilet. The following options are being considered:

The Bathroom/Toilet unit was used like this for many years at Demotech's own workshop.

Work in a village for this project is split up in eight parts:

Construct the slab and gutter molds with the local carpenter and his/her helpers. These are wooden replica's of the concrete parts to be cast later.

(Note; This would be an appropriate place to have a dimensional drawing of the plans not just a picture)

With the wooden mold of the slab make two imprints in moist dirt. The latest working method is to set the slab mold face up, fill with dirt, flatten and compact the dirt level with the top of the sides of the mold then quickly turn the slab over to a face down position. Moist dirt is then compacted around the sides of the mold to form the sides of the imprint. Finally, with great care, the wooden copy is lifted off the imprint. Often small repairs are needed, to the now almost complete imprint, which can be done with mud and something flat to fill and smooth imperfections.

Make One Imprint with the Gutter Mold[edit | edit source]

The imprint of the gutter is made in the same way as the slab imprints. Again the top of the wooden copy is filled with dirt that is compacted and flattened.

Then the gutter mold is turned over, dirt is compacted against the sides of the mold which is then lifted off.

WARNING These imprints are easily damaged, keep small children, goats and dogs at a distance. Keep moist until used and cover it to protect against sun and rain.

Prepare concrete to a consistancy similar to moist mud, not watery mud. To achieve this add water in small amounts while mixing. Before adding concrete cover the surface of the mold imprints, the slab and the gutter imprints, with oiled paper. This prevents the water in the cement from seeping away into the soil form. Reinforce the concrete with scrap such as wire or sheet metal strips. Take care that these bits of wire or sheet metal are not pushed in too far such that they stick through the concrete into the dirt of the imprint. All concrete casts should get ample time to set and harden. In the meantime, keep them wet and prevent damage by animals.

With the two slabs and the gutter ready for assembly it is easier to decide where the bathroom will be situated, in the house or near it. Now it has to be decided whether to compost the excreta or to collect them in a deep pit. Composting is STRONGLY recommended.

A double composting cellar is known from sanitation projects in Vietnam and India.

A drain has to be made for the water used in the bathroom, also containing the urine of its users. This spill water could also be collected as fertilizer. It contains essential agricultural nutrients. However, the odour from the collection of urine has to be prevented. One possible method is for the fluid to be piped to a subsoil root zone of a tree or shrub. If this is to be done it is necessary to dilute the urine approximately 4-1 with water so that plant roots are not chemically burned. This disposal method has the benefits of controlling odour, providing a nitrogen source for plants and supporting food plants, such as berry bushes, without exposing the food portion to contamination.

WARNING Do NOT dig the pit deep enough to be close to groundwater as this will contaminate the water making it unsuitable for drinking. Pits must NOT be dug close to a water well for similar reasons. Contaminants WILL migrate through soil! For this reason composting of waste is much preferred to pit disposal! Water is a valuable resource.

A neat separation has to be made around the slabs and gutter assembly. The entrance is best situated in the middle of the wall, above the gutter.

The opening in the slab for defecation can best be closed with a concrete block cast similarly to casting the slabs, see picture.

Be sure future users receive proper instruction on how to use and maintain the toilet.