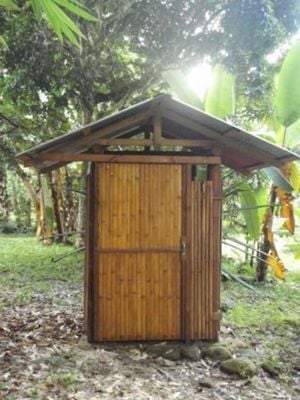 This composting toilet is in use at New Dawn Herbalism School and Farm in Costa Rica.

Plans for the future[edit | edit source]

A second annex will be constructed to the present compost toilet when it fills up with humanure. The second annex will then serve as the in service toilet, while the first toilet will be topped with an air tight lid and allowed to decompose for a year or more until the second annex toilet is filled. At this point, the first toilet will be cleaned out with a long handled shovel and the humanure will be applied to trees on the farm. The toilet will then be put into service again, and the second toilet will be topped and left to decompose. In this manner the humanure is manipulated only once after more than a year's time to insure potential pathogen microorganisms are eliminated through biological decomposition.