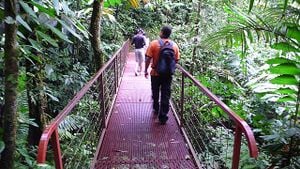 Costa Rica was cited by the United Nations United Nations Development Programme (UNDP) in 2010 as one of the countries that have attained much higher human development than other countries at the same income levels and, in 2011, was highlighted by UNDP for being a good performer on environmental sustainability and having a better record on human development and inequality than the median of their region. It was also the only country to meet all five criteria established to measure environmental sustainability. The country is ranked fifth in the world, and first among the Americas, in terms of the 2012 Environmental Performance Index.

Costa Rica is home to a rich variety of plants and animals. While the country has only about 0.1% of the world's landmass, it contains 5% of the world's biodiversity. Around 25% of the country's land area is in protected national parks and protected areas, (developing world average 13%, developed world average 8%). Costa Rica has successfully managed to diminish deforestation from some of the worst rates in the world. W

Ecotourism in Costa Rica is one of the key activities of the tourism industry in the country. By the early 1990s, Costa Rica became known as the poster child of ecotourism. The country is among many developing nations that look to ecotourism as a way of cashing in on the growing demand for this popular trend of travel.

Ecotourism draws many tourists to visit the extensive national parks and protected areas around the country. Costa Rica was a pioneer in this type of tourism, and the country is recognized as one of the few with true ecotourism. While Costa Rica has gained immense popularity for its development of a successful, yet environmentally friendly, ecotourism industry, environmentalists and economists alike debate whether an economy centered on tourism produces more good than harm. [citation needed] W

The futuristic cargo ship made of wood.[1] Nov 18

How Costa Rica gets it right on sustainability and wellbeing, says Nobel-prize-winner Joseph Stiglitz, May 7 [4]

A global view from a mountain town: how conservation became ingrained in Monteverde, Sep 6 [6]

Which is the greenest, happiest country in the world? Jul 29 [9]

Costa Rica Has Gotten All Of Its Electricity From Renewables For 75 Days Straight, March 21 [10]

In 2007 Costa Rica planted more than five million trees or 1.25 per person making it the highest per capita planting in the world.[11] December 12

Threats to Costa Rica's biodiversity include a rapidly growing human population, developing coastlines for the industry of tourism and harmful agricultural practices all contributing to pollution and environmental degradation. The practice causing the largest concern for Costa Rica's environment is deforestation. Costa Rica has the fourth highest rate of deforestation in the world. Almost four percent of its current forested lands are cut each year. Clearing land for cattle ranching is the most common cause of deforestation. This form of environmental damage along with the farming of monocultures leads to areas where only a few species of plants are present. Ultimately, decreases in plant diversity leads to decreased animal diversity. W