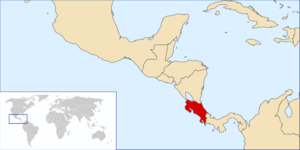 Costa Rica, which translates literally as "Rich Coast", constitutionally abolished its army permanently in 1949. Costa Rica has consistently been among the top Latin American countries in terms of the Human Development Index, and ranked 54th in the world in 2007. The country is ranked 3rd in the world, and 1st among the Americas, in terms of the 2010 Environmental Performance Index. Due to the high quality of its human capital, Costa Rica is the world's fourth largest exporter of high technology.

In 2007 the Costa Rican government announced plans for Costa Rica to become the first carbon neutral country by 2021. According to the New Economics Foundation, Costa Rica ranks first in the Happy Planet Index and is the "greenest" country in the world.

The articles (and subcategories) below list various projects done in, programs and organizations operating in, writings about and resources for Costa Rica.

The following 22 pages are in this category, out of 22 total.