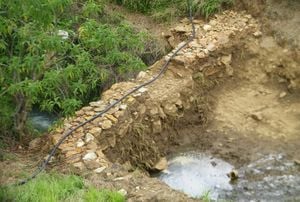 Small walls made of loose stones wrapped in fencing or some other strong permeable material and built between a water source and a water inlet, to allow water to flow through unimpeded, while stopping sediments.

Microfilter dams, also called Rock filter dams or Block and Gravel Inlet Protection, can help stop sand, silt, gravel, and rocks which are eroded by rain or carried in the current from entering a water inlet. The microfilter dams are small walls made of loose stones wrapped in fencing or some other strong permeable material and built between a water source and a water inlet, to allow water to flow through unimpeded, while stopping sediments. These micro filter dams reduce river, storm drain, or open rain catchment tank sedimentation. Though leaving as much of the soil as undisturbed as possible is the best practice for reducing sedimentation, micro-filters can help restore areas already experiencing prior erosion and land disturbance like from deforestation as at Pedregal. Micro-filter dams also give more time for water to filter into the local groundwater, in a similar way to a swale. The design tries to recreate what happens naturally in a healthy stream, which is the formation of pools and steps, which in turn serve as habitat to many plants and animals. At Pedregal microfilter dams are combined with Filter Strips, or wide belts of vegetation that slow water down to increase infiltration and intercept or absorb sediments and other contaminants. This is one project in a series of soil conservation, groundwater recharge, and farming demonstration projects at Pedregal a Permaculture Demonstration Center in San Andres Huayapam, Mexico. 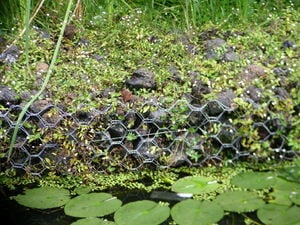 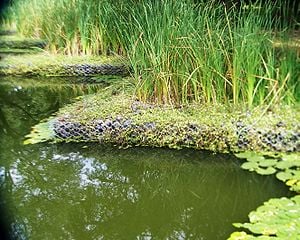 In places where there are known creeks seasonally on sloped hills microfilter dams can help remove the soil, silt, and pebbles from falling down stream and causing sedimentation of the river. Pedregral has slopes of .45 and greater and in these areas microfilter dams have been helpful in preventing further loss of soil from the slopes and revegetating areas around the creeks that previously were barren of plant life.

Micro-filter dams (MFD) work for a drainage area of 10 acres or less, larger areas will either need more micro-filter dams or a larger sediment basin. The MFD must be accessible for periodic sediment removal. Since micro-filter dams are sometimes placed in areas of already flowing water local, state, and national laws will have to be researched for one's specific area. The normal design life of the MFD is about 3 years.[1]

Also small versions have been adapted to protect storm water drains and sewer systems from sedimentation and these are more commonly called Block and Gravel Inlet Protection (BIP). This version is made of concrete cinder blocks stacked so holes are open horizontally and stacked up to only 1 to 2 ft tall circling an inlet to the sewer or storm water system. Blocks are wrapped in a semi-permeable material with gravel on the outside perimeter. One BIP can help drainage areas of one acre or less, for larger sites either use multiple BIP or use a micro-filter dam so that ponding will not occur around the BIP.[1]==Design of Microfilter Dams== 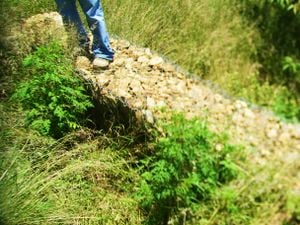 Fig 3. Design 1 at Pedregal with fencing wrapped all around 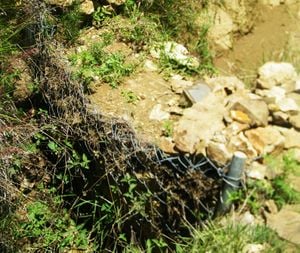 Fig 4. Design 2 at Pedregal with fencing on one side 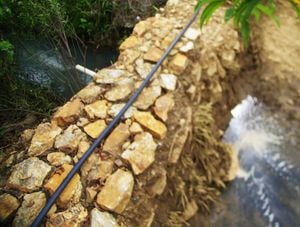 For MFD's the placement should be located as close to the source of sedimentation. It should also be located in a place where water will not be backed up onto someones property.[1]MFD's can either be in canals made for storm water run off or in creek beds.

Is limited on the height of the channel of creek banks, but should not exceed 8 feet.[1]====Spill way====

The dam should be able to handle waters from a 10 year 24 hour storm with a distance of at least 1 foot between the crest of the dam and the water level.[1]====Width of the Top of the Dam====

The width at the top of the dam should not exceed 6 feet.[1]Those at Pedregal range from 1.5 - 4 feet across depending on the flow and size of creek or canal.

Sides can slope, but should only be 3 rise to 1 run or less on the back slope and 2.5 rise to 1 run on the front slope. Slopes allow the dam to stay in place without requiring other supports for structural integrity.[1]At Pedregal they do not use slopes, but instead wrap the loose rock structure in fencing material to support the structure. 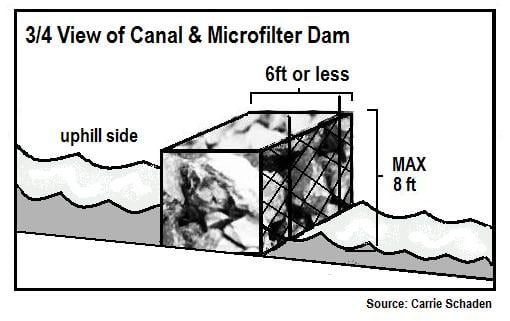 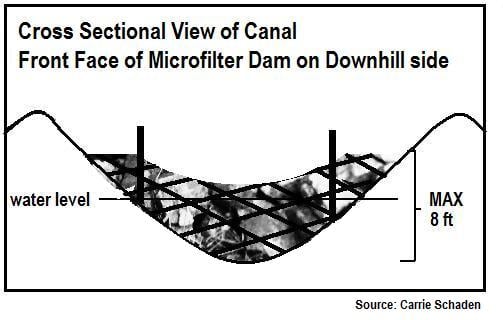 As water flows through the dam a slight waterfall effect can take place where the downstream section is eroded more quickly by the force of the water flowing out through the rocks., This mainly occurs for micro filter dams made of an initial embankment of earth and clay. The bottom edge of the downstream section can be protected by covering the embankment in riprap (or rocks and ruble usually used to protect shorelines).[1]====2 Designs at Pedregal====