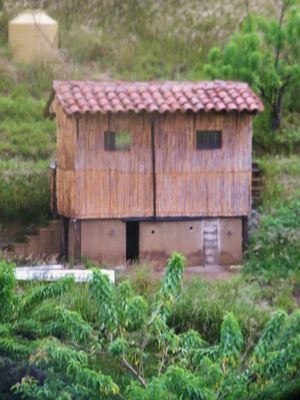 2.5 billion people world wide lack access to basic sanitation. This results in illnesses and deaths including 2 million deaths a year due to diarrhea.[1] Composting toilets are a cheap and efficient option for sanitation. They save water, produce good quality compost and reduce the incidence of intestinal infections and other diseases.This is one project in a series of soil conservation, groundwater recharge, and farming demonstration projects at Pedregal a Permaculture Demonstration Center in San Andres Huayapam, Mexico. 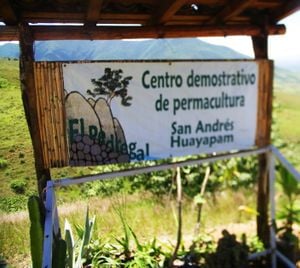 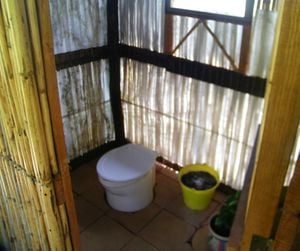 How it Functions[edit | edit source] 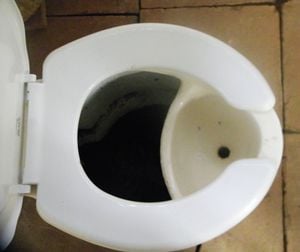 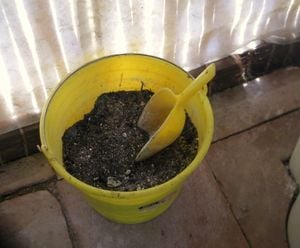 The special design allows the urine to be separated from the solid waste. The urine is lead to an absorption well dug close to the bathroom or it can be captured into a separate receptacle so that after it has been diluted in water it can be utilized as a fertilizer. Since urine has been found to contain about 88 percent of the N (nitrogen), up to 67 percent of the P (phosphorus) and up to 71 percent of the K (potassium) present in human excreta, it is a great application for fertilizer use. Also since most pathogenic organisms are found in the solid excrement it makes it easier to handle in reapplication. Urine can also make up the bulk of human waste systems, with humans producing half a cubic meter annually, producing enough with enough frequency to maybe become part of a regular fertilizer application program.[3] The solid excrement meanwhile enters the interior of the chamber that is in use.[2] 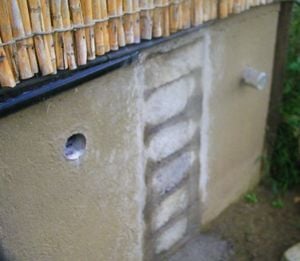 After just depositing fresh excrement in the toilet add one cup of mix of either 3 dirt to 1 lime or 3 dirt to 1 ash on the top. This mix helps avoid the presence of flies and eliminates odors. When the toilet is sealed in an environment without light, oxygen, or water this mix also helps chemically burn parasites in the excrement. BE CARFEUL not to add to much lime or ash if using the finished compost for fertilizer, since the mix can make the compost become too basic for use on most plants.[2]

3. Alternating the Use of the Chambers[edit | edit source] 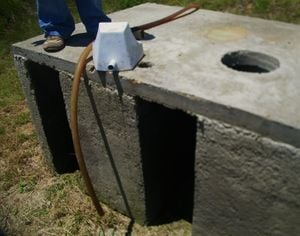 During this time the closed chamber creates an anaerobic environment that gets to high enough temperatures to destroy most pathogens and the action of the lime or ash helps to chemically burn parasites within the waste.

Aerobic Decomposition
Before using each of the cement chambers, deposit 5cm of dry dirt on the floor. While the chamber is in use organisms present in the dirt are introduced to the excrement and help to decompose the waste.
Alkaline Decomposition
During the time that the excrement is covered and sealed without the presence of water, light, or air the lime and ash chemically burns the parasites so that after a few months the compost is free of parasites.[2];Anaerobic Decomposition:If urine is not properly separated from the solid excrement the wet conditions and lack of oxygen can allow anaerobic conditions to dominate, where different microbial organisms may help to break down the waste, but with much smellier results. Much of the smell from systems that mix urine and solids comes from the bacteria in the solid excrement releasing ammonia from the urea. This ammonia is a form of nitrogen that is very volatile and is one of the forms of nitrogen plants prefer for use in growth and plant processes. Biodogesters are designed so that this volatile ammonia can be trapped in its oxygen free environment.[3] 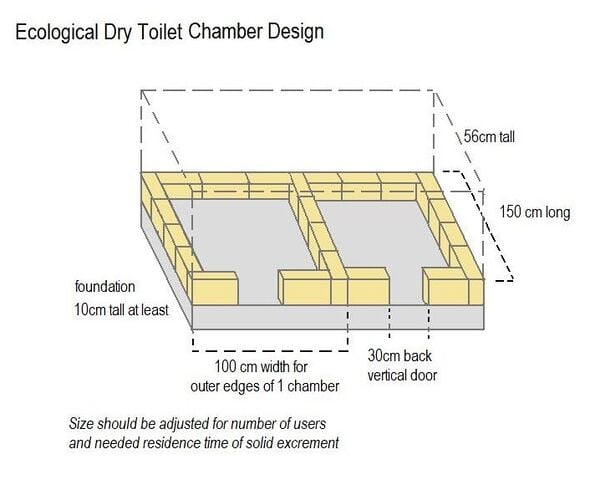 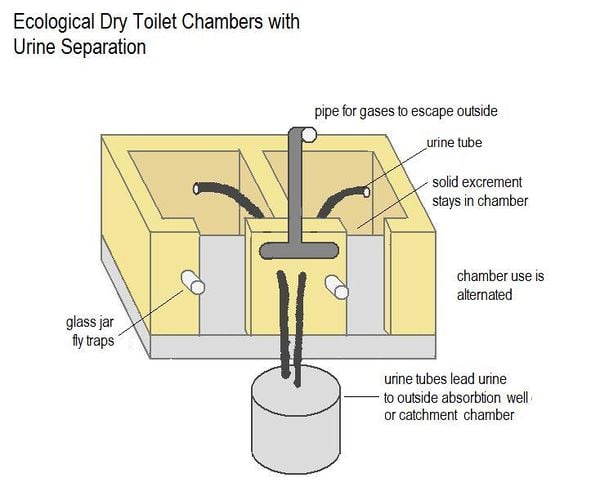 Foundation
Construct on a foundation of cement 10cm thick (3.9 inches, approx.) to prevent ground-based humidity from entering the chamber and to prevent contact between fresh solid waste and underlying soils and subsequent groundwater contamination. In areas that flood easily it is recommended to raise the foundation with a bed of gravel with a thickness of 20cm (7.9 inches, approx.) or more, fixed within wire mesh and topped with the 10cm (3.9 inches, approx.) cement foundation layer to prevent water from entering the seating areas.
Walls of Chamber
Build the walls of each chamber with dried adobe blocks, rock and mortar, or ferrocement. Pedregal used cement. Chambers should be separated by a partition walls of similar thickness (as foundation?--10 cm. or 3.9 inches, approx.), which will also provide structural support to the upper part of the bathroom structure. If using something other then cement for the chambers, it is essential that the inside surfaces of the chamber walls be prepared with an impermeable coating, in order to counteract the decomposing action of excrement and bacterial organisms on the walls. This coating also helps to prevent moisture from entering the chambers. Each of these chambers should have its own side access door (or back access door--as in illustration) to allow for compost removal individually. Doors should be 30cm (11.8 inches, approx.) wide, and as tall as the chamber walls, to facilitate access to all composted materials within the chamber.
Top of Chamber (chamber cover)
A concrete slab the width and length of the outside dimensions of the outer walls of the combined chambers should be fashioned such that there is one hole approximately centered over each chamber. Before the slab's concrete hardens, bolts may be securely seated (or added later with a masonry drill bit and special epoxy) within the slab's top surface and just behind the hole, set apart at a width that accepts a given locale's standard size toilet seat fixtures.
Hole or Seat
Whether just the bare hole is used, or a toilet seat is included over the hole, the urine must be separated using a small triangle-shaped cup (or funnel) that has been attached to the underside of the slab, at the front of the hole, and that protrudes out into the hole far enough to capture excreted urine product. This triangular cup (or funnel) should have a small hole set in its bottom for the attachment of a tube via a hose clamp (worm drive screw tightened band clamp) that leads out to an underground external absorption chamber or other separate collection chamber, where it can be collected for use.[2] 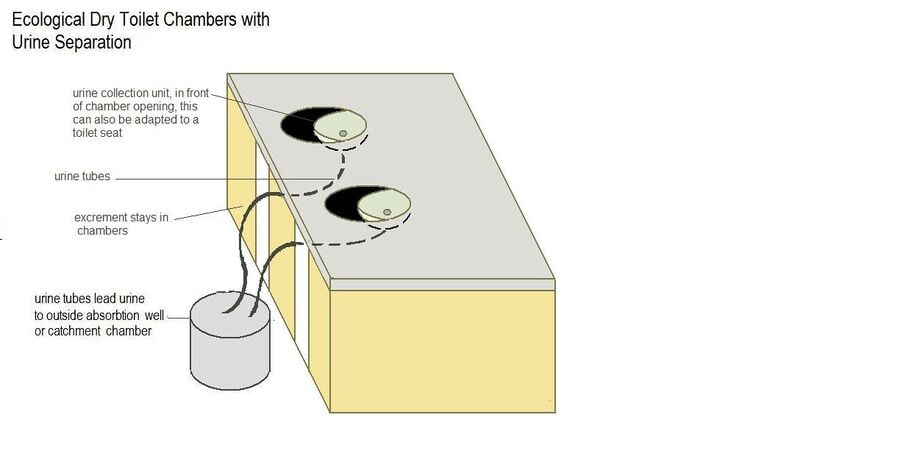 The dry toilet housing above the chambers and slab cover:

Walls and roof are built on top of the slab covering the chambers
These may be of the size, design and materials desired, provided that they meet common sense construction and safety principles. It is important to make sure this upper structure allows good ventilation while preventing the passage of water into the chambers. Pedregal included PVC venting pipes that run up the outside of the back wall of the structure in order to permit decomposing gases to escape to the outside where they will not disturb users. Pedregal's structure was made of bamboo mats woven together with small openings in the design to allow for ventilation, as well as with windows (above breast height to preserve modesty) that bring in light and release odors.[2]