From Appropedia
Solar menu
MOST 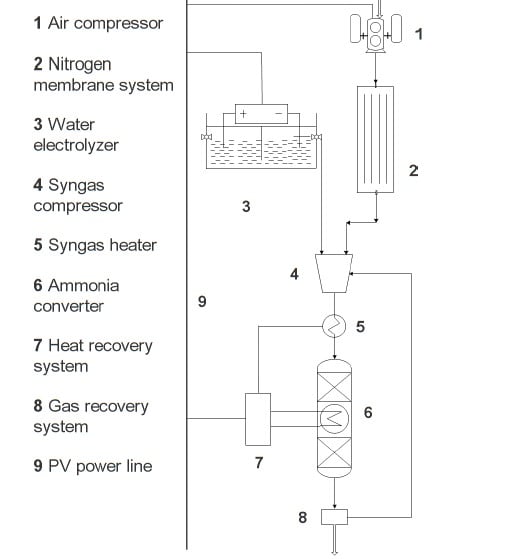 Ammonia synthesis is the most important step for nitrogen-fertilizer production and consumes approximately 1% of the world’s energy production and energy-related greenhouse gas emissions. In addition to the concomitant emissions caused by ammonia and nitrogen fertilizer synthesis, centrally produced fertilizer that must be distributed to farms also harms the environment because of the embodied energy of transportation. An environmentally-optimal nitrogen fertilizer system would be distributed on farms themselves using only renewable inputs. Recent developments in solar photovoltaic technology and subsystems for ammonia production have made non-organic on-site ammonia production physically possible. This study provides a technical evaluation of the process for on-site nitrogen-fertilization of corn using solar photovoltaic electricity as the energy input. The system consists of a water electrolysis system to generate hydrogen and a membrane system to generate nitrogen needed as material inputs. Total power consumption for syngas preparation to generate a unit of ammonia is calculated. System total energy consumption is calculated while compensating syngas preparation with heat recovery. Five case-study locations are evaluated to determine their suggested nitrogen fertilizer addition (N-rate) for corn growth and the energy consumption for suggested N-rate is calculated. The System Advisor Model (SAM) is then used to simulate the PV system output for those five locations. Finally, the PV land use required as a fraction of the corn field area is determined. The results indicate that because PV is so much more efficient at solar energy conversion than organic methods, even the worst case evaluated in Indiana requires less than 1% of the corn field converted to a PV system to provide enough energy to generate sufficient amounts of ammonia for fertilizer for the remaining corn. The system was modeled to provide ammonia to fertilize for corn fields larger than 1079 acres with the worst soil conditions, the area of which applies to more than half of cropland in the U.S. in 2011. As the finiteness and emissions of fossil fuel production of nitrogen become more important, this renewable system should become economical and future investigations into its overall viability are warranted.