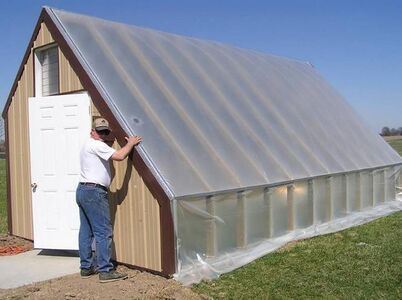 A passive solar greenhouse.
Not to be confused with PassivHaus / Passive House which is a performance-based energy standard in construction

Passive House design is about managing heat loss and heat gain (not just from the sun but from all sources). The intended result is to have a structure that requires minimal energy to heat and cool.[1]

As such, some state that passive house design has greater applicability than solar design since orientation with respect to the sun is not absolutely necessary. Passive House design does not necessarily require a structure which is elongated along the east-west axis with extensive glazing on the equator facing side. Indeed, the ideal form of a passive house is a cube (lower surface area to volume ratio).[1] Passive solar houses are also said to be more complicated to design, and the internal temperature may fluctuate uncomfortably if they are designed poorly.[2] Proponents of superinsulation state that compared to solar houses, greater savings can be obtained by building air tight with lots of insulation in walls and high R windows.[2]

There are 6 main types of passive solar design.[3] These can be considered in 3 generic categories in terms of the relationship between the thermal collector (or dissipator)and the interior space of the structure.[4] There are 2 distinct approaches of each generic category.[4]

Direct gain passive solar systems are where the thermal transfer occurs within the building interior.[4] Thermal mass may either be distrubeted throughout the building (e.g. the floors and the pole facing walls), or mass may be concentrated.[4]

The 2 approaches of isolated systems are the sunspace and the thermosyphon.[4]