The principle of the thermosyphon system at play.
Page data

Thermosiphoning, also known as thermosyphoning, is considered to be an appropriate technology. This process utilizes natural, renewable resources and the basic laws of thermodynamics to create movement of a heated supply of air or water. The energy source for this process is solar radiation(or any other source of heat): the energy of the sun is captured in a solar collection device and is transferred to either air or water via conduction. The entire process may be explained by the thermosiphoning effect: When air or water is heated, it gains kinetic energy from the heating source and becomes excited. As a result, the water becomes less dense, expands, and thus rises. In contrast, when water or air is cooled, energy is extracted from the molecules and the water becomes less active, more dense, and tends to "sink." Thermosiphoning harnesses the natural density differences between cold and hot fluids, and controls them in a system that produces natural fluid movement. Several systems based on this technology are currently available, and may be read about in greater detail within the following text.

The principle of the thermosyphon system is that cold water has a higher specific gravity (density) than warm water, and so being heavier will sink down. Therefore, the collector is always mounted below the water storage tank, so that cold water from the tank reaches the collector via a descending water pipe. If the collector heats up the water, the water rises again and reaches the tank through an ascending water pipe at the upper end of the collector. The cycle of tank -> water pipe -> collector ensures the water is heated up until it achieves an equilibrium temperature. The consumer can then make use of the hot water from the top of the tank, with any water used is replaced by cold water at the bottom. The collector then heats up the cold water again. Due to higher temperature differences at higher solar irradiances, warm water rises faster than it does at lower irradiances. Therefore, the circulation of water adapts itself almost perfectly to the level of solar irradiance. A thermosyphon system's storage tank must be positioned well above the collector, otherwise the cycle can run backwards during the night and all the water will cool down. Furthermore, the cycle does not work properly at very small height differences. In regions with high solar irradiation and flatroof architecture, storage tanks are usually installed on the roof.

Thermodynamics is the study of energy.

This law may be applied to the movement of water in thermosiphoning system: Energy from the sun is directed and transferred (via conduction and convection) to either water, air, or another medium of choice. This natural process of heating eliminates the need for external energy sources such as fossil fuels or electricity.

Energy is always conserved, however energy (or heat in this case) may often be lost in a given system (thermosiphoning) as heat. Adding insulation with appropriate R values to the system and its plumbing may greatly reduce heat loss, and thus increase efficiency.

Darkly colored collection plates within the solar collector will aid in increasing solar absorption, thus increasing the amount of heat available to heat water or air in thermosiphoning. In contrast, reflective or lightly colored piping and storage tanks should be utilized as the light colors will help to reduce heat radiation out of the system. 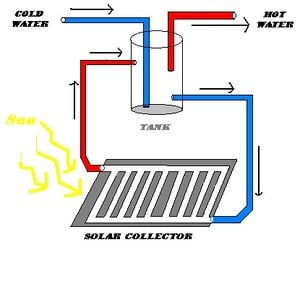 Gravity-feed systems utilize the same principals of passive thermosiphoning as does the close-coupled system, however placement of the tank differs. Tanks are installed horizontally into a roof, which is often located directly above the solar collector. Once needed, the heated water within the storage tank takes the path of least resistance and moves via gravity down into the desired location. Gravity-feed systems require more piping/plumbing to distribute the heated water, and this factor should be taken into consideration when installing or purchasing a thermosiphoning system. 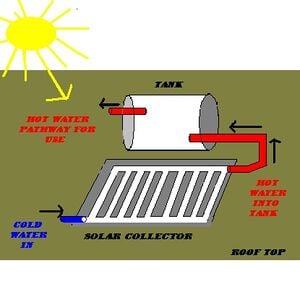 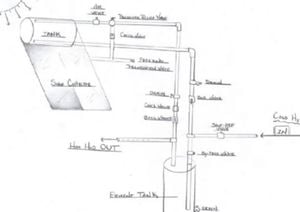 Active solar heating systems function on the same basis of the thermosiphoning effect, however active systems utilize an energy source other than solar energy to help drive the process. This system installs only the solar collector on the roof, while the storage tank is installed on the ground or anywhere else below. These active water heating units require some external form of energy to pump the water throughout the system. By utilizing additional energy, these active systems are less cost efficient than passive systems. 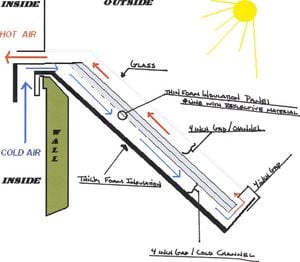 An example of a passive solar thermal heating system method is Thermosiphon Heat Exchange. It is based on the principle of natural convection, in which air or water is circulated in a vertical closed-looped circuit without using a pump. Cool air indoors travels through a vent and is directed into an opening in the bottom of a solar collector. The air contained within the solar collector is then heated by the sun via solar radiation. Cool air is dense and will sink, while warm air is less dense and will rise. As the air heats up within the solar collector, it becomes less dense than the cooler air and rises. The warm air rises out of a vent in the top opening of the solar collector, moves into the desired area (i.e. indoors), and is replaced by cooler air. This air exchange process will continue until the indoor air temperature reaches an equilibrium with the temperature outdoors.

Keep in mind: the bigger the solar collector, the better.

Note: - plastic flaps will prevent back flow of air through upper vents at night