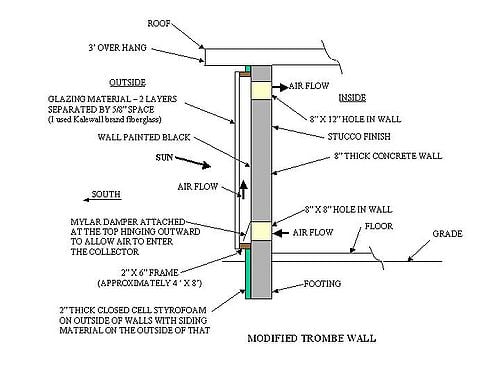 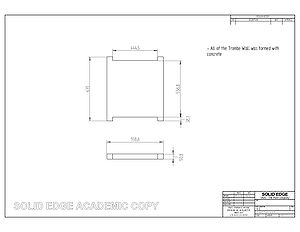 Modern Trombe walls have vents added to the top and bottom of the air gap between the glazing and the thermal mass. Heated air flows via convection into the building interior. The vents have one-way flaps which prevent convection at night, thereby making heat flow strongly directional. This kind of design is an indirect passive thermal collector. By moving the heat away from the collection surface, it greatly reduces thermal losses at night and improves net heat gain. Generally, the vents to the interior are closed in summer months when heat gain is not wanted.

Because temperature variations tend to propagate through dense masonry materials (thermal diffusion) at a rate of approximately 1 inch per hour, daytime heat gain will be available at the interior surface of the thermal mass in the early evening when it's needed. This time lag property of thermal mass, combined with its thermal decrement (dampening of temperature variations), allows the use of fluctuating daytime solar energy as a more uniform night-time heat source.

Common modifications to the Trombe wall include:

In Ladakh, India, the Ladakh Project is designing Trombe walls that complement Ladakh's traditional architecture and has promoted building them in Ladakhi homes. This has shown Ladhakis a clean, reliable alternative to fire as a source of heat. The traditional fuel, dung, burns poorly and offers poor relief from the bitter winter temperatures. The smoldering dung produces significant amounts of smoke that fouls the air and causes many health problems. Trombe walls offer relief from both the cold and the smoke. Ladakh receives about 320 days of sun annually, and the traditional building materials — stone and mud brick — provide the thermal mass needed for heat collection in a Trombe wall.[2]

The Druk White Lotus School in Ladakh uses Trombe walls[3] and as part of "a model of appropriate design and development".[4]

Page data
Retrieved from "https://www.appropedia.org/w/index.php?title=Trombe_walls&oldid=669611"
Cookies help us deliver our services. By using our services, you agree to our use of cookies.
Categories:
About Appropedia · Policies · Contact · Content is available under CC-BY-SA-4.0 unless otherwise noted.