Solar chimney's are extensively used, but this design has not been prototyped.

A solar or thermal chimney is a form of passive ventilation that can be applied to a structure. It uses the principles of heat transfer and fluid mechanics to naturally ventilate a structure without the need of an outside source of electricity. This makes the solar chimney a promising alternative to forced air in both the developed and the developing world.

Indoor air quality is a health issue that plagues the developing world. In many regions, the ambient temperature of a household can far exceed a comfortable living temperature. In others, families prepare their food and water indoors and the living space is laden with smoke.[1] Implementing a solar chimney in an appropriate climate can help increase the indoor air quality of a home and subsequently improve the health and living conditions of residents.

= pressure difference between chimney air and inside air (Pa)

To determine the effect of the solar chimney on ventilation, we must find the velocity. The equation for velocity due to the density difference is shown below.

Once the velocity is determined, the volumetric flow rate of the air can be found using equation 3 below.

A finite element analysis was performed using THERM 6.2 software.[3] THERM is a software that is mainly used as a modelling program for glazing systems in buildings. THERM is the benchmarking program used by the NFRC (National Fenestration Rating Council) to model energy and solar properties of fenestration assemblies and was created by Lawrence Berkeley National Laboratory. The software is used by many leading glazing manufacturers in order to test their glazing system performance. The software is freeware and as such can be used by anyone without purchasing a license.

The larger studs were spaced at 16" on centre as also described by table 9.23.10.1.. This ensures that the structure is designed with the safety of its users in mind. The solar chimney is a simple stud wall design with an extrusion at its base that connects the solar chimney to the dwelling it serves. Since the primary goal of the project was to perform the finite element analysis and to assess the feasibility of the solar chimney on a theoretical basis, rough google sketch drawings were drawn based on Canadian Building Principles in order to visualize the implementation of the concept. Further work will have to be done to adjust the conceptual design to be implemented in different areas of the world, where the same construction materials and methods may not be appropriate or be available.

The solar chimney would be constructed mainly of 2 x 4s. The sections were modelled after a generic stud wall for simplicity. The sections can all be nailed together so no specialized equipment would be required. The framing as shown needs to be covered by either sheathing or a plywood in order to shield the inside of the dwelling from the outside, and for the solar chimney to function. The exterior finishing should match the existing finishing of the dwelling and be integrated as part of the building envelope in order to ensure that the dwelling is shielded from the elements to its original standard.

Sheathing and matched roofing materials should be added to the top of the chimney in order to prevent water from seeping inside. Depending on the location, it may also be wise to add mosquito netting around the chimney flue. All wood in contact with grade should be pressure treated or measures should be taken to counteract moisture buildup in the wood in order to prevent rotting. Please see below for a description of how to build the concept solar chimney. 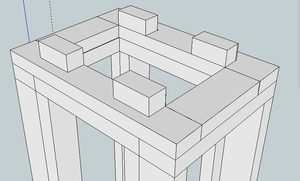 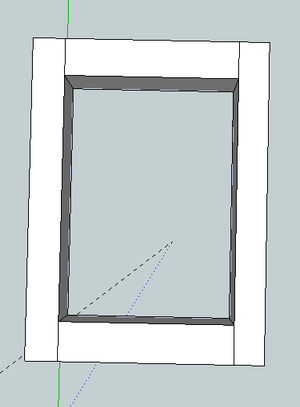 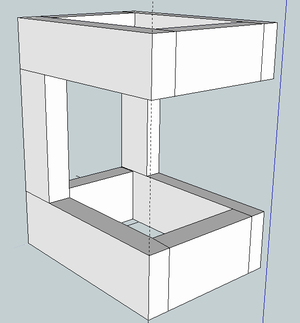 Cover the exterior of the stud wall with sheathing and match the exterior cladding and roof finish of the dwelling.

Using the finite element analysis model and the described equations in the principles section, the total volumetric flow rate of air leaving the dwelling per second was determined to be 0.25 metres cubed per second. This represents an improvement in air exchange from the dwelling. Installing the solar chimney would increase the air quality in the dwelling, improving living condition for its inhabitants. The solar chimney has the potential to have its performance increased by using materials such as glass that enhance gains due to solar radiation. This would increase the effectiveness of the unit, but would also make the construction of the unit more complex and costly. To be implemented as an appropriate technology, the cost must be kept to a minimum. Further research into construction methods of a specific region would allow for a specific prototype to be designed taking into account the area's building practices.

Page data
Retrieved from "https://www.appropedia.org/w/index.php?title=Solar_chimney&oldid=659617"
Cookies help us deliver our services. By using our services, you agree to our use of cookies.
Categories:
Maintenance categories:
About Appropedia · Policies · Contact · Content is available under CC-BY-SA-4.0 unless otherwise noted.