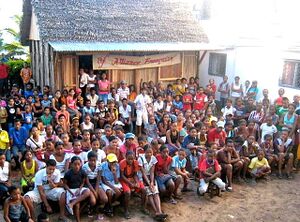 Africa is the world's second-largest and second-most-populous continent. With 1.1 billion people as of 2013, it accounts for about 15% of the world's human population. W

Please see our national pages via the Africa category, where of course you can share any more information you may have about local sustainability initiatives.

dadamac.net, Collaboration, Education, Livelihoods and Development in a Changing World

Africa now has 350 million urban dwellers, more than the populations of Canada and the United States combined. Asia and Africa are expected to double their urban populations to roughly 3.4 billion by 2030. [1]

Six bright ideas lighting up Africa from the grassroots, Nov 23 [7]

Plastic Shopping Bags Will Soon Be History Everywhere in Africa. Here's Why... Jun 4 [9]

African countries are building a “Great Green Wall” to beat back the Sahara desert, Dec 22 [11]

The tremendous success of agroecology in Africa, November 21 [12]

‘Permaculture the African Way’ in Cameroon’s Only Eco-Village, August 2 [15]

We need a new convention to protect Africa's environment, May 7 [16]

Major victory for wildlife conservation in Africa as the Serengeti Highway is ruled unlawful, June 21 [18]

"Gibe III dam will be a disaster of cataclysmic proportions for the tribes of the Omo valley", [21] March 23

Wonder tree could be one answer to food scarcity in Africa, [22] August 28

Extensive forest fires are affecting several of Kenya's key moisture reservoirs including the 400,000-hectare Mau Forest Complex, Kenya's largest forest and the source of water for at least twelve rivers. [25] March 25. Important Rift Valley Lakes, including Lake Victoria, the source of the River Nile, depend on the rivers which are fed from the forest. Noor Hassan Noor, the Rift Valley Provincial Commissioner said that between 25 and 35 per cent of the eastern Mau forest has been lost so far as a result of the fire.

Linking sport and the environment to the peace and poverty agenda in Kenya, [28] June 18

Environmental issues in Africa are caused by anthropogenic effects on the African natural environment and have major impacts on humans and nearly all forms of endemic life. Issues include desertification, problems with access to safe water supply, population explosion and fauna depletion. These issues are ultimately linked to over-population in Africa, as well as on a global scale. Nearly all of Africa's environmental problems are geographically variable and human induced, though not necessarily by Africans. W

Africa is suffering deforestation at twice the world rate, according to the United Nations Environment Programme (UNEP). Some sources claim that deforestation has already wiped out roughly 90% of West Africa's original forests. Deforestation is accelerating in Central Africa. According to the FAO, Africa lost the highest percentage of tropical forests of any continent during the 1980s, 1990s, and early 2000s. According to the figures from the FAO (1997), only 22.8% of West Africa's moist forests remain, much of this degraded. Nigeria has lost 81% of its old-growth forests in just 15 years (1990–2005). Massive deforestation threatens food security in some African countries. One factor contributing to the continent's high rates of deforestation is the dependence of 90% of its population on wood as fuel for heating and cooking.

Research carried out by WWF International in 2006 shows that in Africa, rates of illegal logging vary from 50% in Cameroon and Equatorial Guinea to 70% in Gabon and 80% in Liberia – where timber revenues played a major role in financing the Sierra Leone Civil War and other regional armed conflicts until the UN Security Council imposed a ban on all Liberian timber in 2003. W