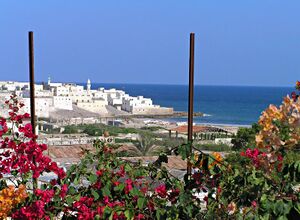 Somalia is a semi-arid country with about 1.64% arable land. The first local environmental organizations were Ecoterra Somalia and the Somali Ecological Society, both of which helped promote awareness about ecological concerns and mobilized environmental programs in all governmental sectors as well as in civil society. From 1971 onwards, a massive tree-planting campaign on a nationwide scale was introduced by the Siad Barre government to halt the advance of thousands of acres of wind-driven sand dunes that threatened to engulf towns, roads and farm land. By 1988, 265 hectares of a projected 336 hectares had been treated, with 39 range reserve sites and 36 forestry plantation sites established. In 1986, the Wildlife Rescue, Research and Monitoring Centre was established by Ecoterra Intl., with the goal of sensitizing the public to ecological issues. This educational effort led in 1989 to the so-called "Somalia proposal" and a decision by the Somali government to adhere to the Convention on International Trade in Endangered Species of Wild Fauna and Flora (CITES), which established for the first time a worldwide ban on the trade of elephant ivory. W

Later, Fatima Jibrell, a prominent Somali environmental activist, mounted a successful campaign to salvage old-growth forests of acacia trees in the northeastern part of Somalia. These trees, which can grow up to 500 years old, were being cut down to make charcoal since this so-called "black gold" is highly in demand in the Arabian Peninsula, where the region's Bedouin tribes believe the acacia to be sacred. However, while being a relatively inexpensive fuel that meets a user's needs, the production of charcoal often leads to deforestation and desertification. As a way of addressing this problem, Jibrell and the Horn of Africa Relief and Development Organization (Horn Relief; now Adeso), an organization of which she was the founder and Executive Director, trained a group of teens to educate the public on the permanent damage that producing charcoal can create. In 1999, Horn Relief coordinated a peace march in the northeastern Puntland region of Somalia to put an end to the so-called "charcoal wars". As a result of Jibrell's lobbying and education efforts, the Puntland government in 2000 prohibited the exportation of charcoal. The government has also since enforced the ban, which has reportedly led to an 80% drop in exports of the product. Jibrell was awarded the Goldman Environmental Prize in 2002 for her efforts against environmental degradation and desertification. In 2008, she also won the National Geographic Society/Buffett Foundation Award for Leadership in Conservation. W

Following the massive tsunami of December 2004, there have also emerged allegations that after the outbreak of the Somali Civil War in the late 1980s, Somalia's long, remote shoreline was used as a dump site for the disposal of toxic waste. The huge waves that battered northern Somalia after the tsunami are believed to have stirred up tons of nuclear and toxic waste that might have been dumped illegally in the country by foreign firms. According to UNEP, the current situation along the Somali coastline poses a very serious environmental hazard not only in Somalia, but also in the eastern Africa sub-region. W

Page data
Retrieved from "https://www.appropedia.org/w/index.php?title=Somalia_community_action&oldid=668820"
Cookies help us deliver our services. By using our services, you agree to our use of cookies.
Categories:
About Appropedia · Policies · Contact · Content is available under CC-BY-SA-4.0 unless otherwise noted.