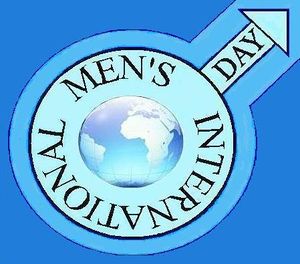 Many ideas, suggestions and resources available via: International Men's Day

According to its creators, International Men's Day is a time to promote positive aspects of male identity based on the premise that 'males of all ages respond more energetically to positive role models than they do to negative gender stereotyping'. During past years the method of commemorating International Men's Day included public seminars, classroom activities at schools, radio and television programs, peaceful displays and marches, debates, panel discussions, award ceremonies, and art displays. The manner of observing this annual day is optional, and any appropriate forums can be used. Early pioneers of IMD reminded that the day is not intended to compete against International Women's Day, but is for the purpose of highlighting men's experiences. In 2009 the following broad objectives were ratified as a basis for all International Men's Day observations, and are applied equally to men and boys irrespective of their age, ability, social background, ethnicity, sexual orientation, gender identity, religious belief and relationship status:

According to Men's Activism News Network, International Men's Day also interfaces with "Movember" – a worldwide moustache growing charity event held during November each year that raises funds and awareness for men's health, one of the key themes promoted on IMD. It also interfaces with Universal Children's Day on 20 November and forms a 48-hour celebration firstly of men, then children respectively, with a recognition of the bonds between them. W