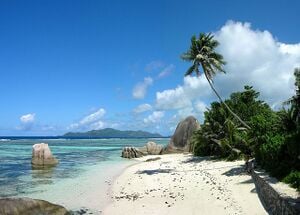 Environmental importance: The coast and its adjacent areas on and off shore are an important part of a local ecosystem: the mixture of fresh water and salt water in estuaries provides many nutrients for marine life. Salt marshes and beaches also support a diversity of plants, animals and insects crucial to the food chain.

Sea level rise: Sea level rises can considerably influence human populations in coastal and island regions and natural environments like marine ecosystems. Sea level rise is expected to continue for centuries. Because of the slow inertia – long response time for parts of the climate system, it has been estimated that we are already committed to a sea-level rise of approximately 2.3 meters for each degree of temperature rise within the next 2,000 years. W

Research shows that 634 million people - one tenth of the global population - live in coastal areas that lie within just ten metres above sea level. [1]

Blue Ventures is a science-led social enterprise that develops transformative approaches for nurturing and sustaining locally led marine conservation. The organisation works in partnership with coastal communities in places where the ocean is vital to the culture and economy.

Blue Ventures' range of marine management models are designed to address the barriers between communities and conservation. By integrating community-led resource management with community health and alternative livelihood initiatives to benefit both people and nature.

Blue Ventures works in the Indian Ocean, southeast Asia and the Caribbean. They operate field programmes in Madagascar, Belize, and Timor-Leste with a small number of staff based in Comoros, Kenya, Mozambique and Tanzania supporting partners' projects.

Headquartered in Oakland, California with field offices in Hawai‘i, Fiji, Indonesia and Honduras, CORAL unites communities to save coral reefs. Working with local people, communities, and partners—from fishermen and government leaders to divers to scientists—CORAL protects one of our most valuable and threatened ecosystems. International teams design long-term and lasting conservation programs that reduce local threats to coral reefs and are replicated across the globe. [2]

South Africa must start managing its retreat from the coast, May 8 [4]

Page data
Retrieved from "https://www.appropedia.org/w/index.php?title=Coastal_community_activism&oldid=645118"
Cookies help us deliver our services. By using our services, you agree to our use of cookies.
Category:
About Appropedia · Policies · Contact · Content is available under CC-BY-SA-4.0 unless otherwise noted.