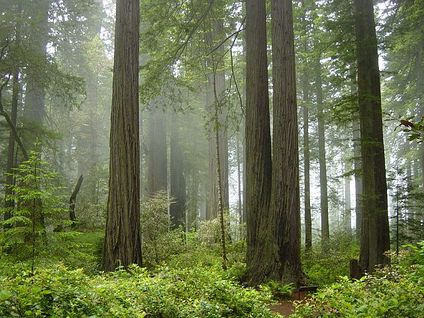 California is a state on the west coast of the United States, known for its relatively progressive policies on sustainability and support of renewable energy, as well as its natural beauty, including redwood forests.

Please see our Local communities in California pages, where of course you can share any more information you may have about local sustainability initiatives.

Solar power in California: California leads the nation in the number of homes which have solar panels installed, totaling over 230,000. California Solar Initiative

Wind power in California has doubled in capacity since 2002. California presently ranks second nationwide in terms of capacity, behind Texas and just ahead of Iowa.

Wikipedia: City of Oakland's Zero Waste Program: The City adopted a Zero Waste Strategic Plan in 2006, detailing a road map for the City to follow toward the implementation of a Zero Waste System by 2020. Oakland residents have played an important role in moving the City toward Zero Waste. Using their buying-power, consumers can tell industries that products must be non-toxic, reusable, recyclable or compostable or they will stay on the shelf.

Plug-in hybrids in California: California has been a leader in the promotion of plug-in hybrids (PHEVs). As of January 2014, California leads the country with 5,749 public charging points, representing 26.7% of the U.S total.

Transportation in California, Current issues: The California High Speed Rail Authority was created in 1996 by the state to implement an extensive 700 mile (1127 km) rail system. It would provide a TGV-style high-speed link between the state's four major metropolitan areas, and would allow travel between Los Angeles' Union Station and the San Francisco Transbay Terminal in two and a half hours. Voters approved Proposition 1A in November 2008, approving a $9 billion state bond to finance the project. Then in 2012, the California legislature and Governor Jerry Brown approved construction financing for an initial stage of the project. However, the High Speed Rail Authority still estimates that the initial stages will not be completed until 2021.

The Wellbeing Project, information from the City of Santa Monica's Office of Wellbeing.

In 2006, Jessy Kate Schingler and four young engineers landed jobs at NASA in Silicon Valley. Instead of opting for cheaper housing with a long commute in one of the most expensive housing markets in the U.S., they rented a large house nearby and started the first coliving community, Rainbow Mansion. They discovered there was a glut of mansions in the area. They saw a way to create a better quality of life at a lower cost by sharing a mansion, but what was most important to them was growing as people. So, they created an environment to accelerate their personal and professional development through collaboration. In addition to sharing rent, utilities, cars, and food, they began supporting each others' professional projects including startups. They also sought out other people who were interested in changing the world for the better. They hosted workshops and events to learn and network beyond the four walls of their home. They often kept one or two rooms open so young innovators from other countries could visit.

Jessy took this one step further by creating Embassy, a network of coliving houses that give tenants access to many communities. She describes this lifestyle as, "one rent, many locations." Others have followed her lead, and the coliving movement grows as young workers have a great need for affordable housing, meaningful friendships, and professional development. My friend Chelsea Rustrum says of the coliving experience:

“You develop deeper, more real relationships and have the potential to actually work together, actually help each other. Not just in professional ways but in personal ways also." [2]