From Appropedia
Redirected from Long Beach 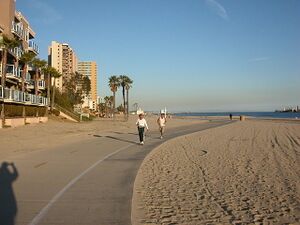 Incorporated in 1897, Long Beach lies in Southern California in the southern part of Los Angeles County. Long Beach is approximately 20 miles (32 km) south of downtown Los Angeles, and is part of the Gateway Cities region. The Port of Long Beach is the second busiest container port in the United States and is among the world's largest shipping ports. The city is over an oilfield with minor wells both directly beneath the city as well as offshore.

The city is known for its waterfront attractions, including the permanently docked RMS Queen Mary and the Aquarium of the Pacific. Long Beach also hosts the Grand Prix of Long Beach, an IndyCar race and the Long Beach Pride Festival and Parade. California State University, Long Beach, one of the largest universities in California by enrollment, is within the city.

The area that is now Long Beach historically included several ecological communities, with coastal scrub dominating. A handful of the native plants of the region can still be found in the city. These include California buckwheat (Eriogonum fasciculatum), California sagebrush (Artemisia californica), and California poppy (Eschscholzia californica). Some stands of coast live oak (Quercus agrifolia) still remain in the El Dorado Nature Center. California fan palm (Washingtonia filifera), a plant that is native further inland, was introduced to the city as a garden ornamental and is now naturalized. Some indigenous species of birds, mammals, and other wildlife have adapted to development.

Since the arrival of Europeans, many alien species have become naturalized in the area. Introduced plants include yellow mustard, eucalyptus, wild radish, and tumbleweed. Such plants now far outnumber the indigenous plants and spread rapidly in the city's vacant lots and oil fields.

The city and its residents have initiatives underway to preserve and reclaim part of its ecological heritage. The RiverLink project has begun to revegetate the Long Beach stretch of the Los Angeles River with indigenous plants. Part of the remaining Pacific Electric right-of-way was cleared of nonnatives, planted with indigenous plants, and made accessible with foot and bike paths. This community open space is now known as The Long Beach Greenbelt and is the focus of continuing efforts in restoration and community education.

Long Beach led Southern California in parks access, size and spending, ranking 16th among a survey of 75 large U.S. cities, with Los Angeles and Anaheim tied for 51st and Santa Ana 69th, according to a study released by a national conservation group.

Long Beach, Pollution: Long Beach suffers from some of the worst air pollution in the entire United States. Most of the city is in close proximity to the twin ports of Los Angeles and Long Beach, and the prevailing westerly-to-west-south-westerly winds bring a large portion of the twin ports' air pollution directly into Long Beach before dispersing it northward then eastward. Heavy pollution sources at the ports include the ships themselves, which burn high-sulfur, high-soot-producing bunker fuel to maintain internal electrical power while docked, as well as heavy diesel pollution from drayage trucks at the ports, and short-haul tractor-trailer trucks ferrying cargo from the ports to inland warehousing, rail yards, and shipping centers. Long-term average levels of toxic air pollutants (and the corresponding carcinogenic risk they create) can be two to three times higher in and around Long Beach, and in downwind areas to the east, than in other parts of the Los Angeles metropolitan area, such as the Westside, San Fernando Valley, or San Gabriel Valley. While overall regional pollution in the Los Angeles metropolitan area has declined in the last decade, pollution levels remain dangerously high in much of Long Beach due to the port pollution, with diesel exhaust from ships, trains, and trucks as the largest sources.

Additionally, the Long Beach area is directly downwind of several of the South Bay oil refineries. Any refinery process or upset that results in the atmospheric release of refinery by-products (commonly sulfur dioxide) will usually impact air in Long Beach due to the west-south-westerly prevailing wind. Air quality events where large portions of the City are affected by strong-smelling refinery gas releases occur several times a year, although they largely go unreported.

Similarly, the water quality in the Long Beach portion of San Pedro Bay, which is enclosed by the Federal Breakwater, commonly ranks among the poorest on the entire West Coast. Many Long Beach beaches average a D or F grade on beach water quality in the Beach Report Card published by Heal the Bay. The Los Angeles River discharges directly into the Long Beach side of San Pedro Bay, and conveys a large portion of all the urban runoff from the entire Los Angeles metropolitan area directly into the harbor water. This runoff contains most of the debris, garbage, chemical pollutants, and biological pathogens that are washed into storm drains in every upstream city each time it rains. Because the breakwater prevents normal tidal flushing and wave action, these pollutants build up in the harbor. The water enclosed by the breakwater, along most of the city's beaches, can be subject to red tides due to this stagnation as well. Because of these factors, the water in Long Beach is often unsafe for swimming.

Long Beach, Bike paths: The City of Long Beach's vision is to be the most bicycle-friendly urban city in the nation. The City of Long Beach has five major Class 1 bike paths (separate off road bike paths) within its boundaries, encompassing over 60 miles (97 km). The City also has many Class 2 (painted lanes on roadway) and Class 3 paths (connecting bike routes with shared use of road with cars). The 3.1-mile (5.0 km) Shoreline Pedestrian Bikepath runs along the ocean from Shoreline Village to Belmont Shore. The southern terminus of the L.A. River bicycle path is located in southwest Long Beach between Downtown and the Port. The southern terminus of the San Gabriel River bicycle path is located just east of Long Beach in Seal Beach, and the trail runs north through the El Dorado Park neighborhood in east Long Beach and adjacent to El Dorado Regional Park.

The city's green lane project in Belmont Shore (sharrows, bike boxes) earned an award from the Institute of Transportation Engineers for best innovative project of the year (2010). In an effort to provide sustainable transportation alternatives to the community, as well as a safe route to several neighborhood schools, the City of Long Beach is also installing a "bike boulevard" on Vista Street, extending from Temple Avenue to Nieto Avenue.

In April 2011, new separated bikeways were added to two streets in downtown Long Beach along Broadway and 3rd Street – between Alamitos Ave. and Golden Ave. These are one-way streets with two lanes of through traffic, one parking lane and a protected bikeway. Bike signals are installed at intersections to control safe crossing of cyclists in the separated lanes and regulate motor vehicle left turns across the bikeway.

New bikeway signs can be found throughout Long Beach to identify designated bike routes and provide wayfinding information for cyclists. Generally you will find even numbers assigned to east/west routes; odd numbers assigned to north/south routes; and route numbers increasing as they progress from south to north. The signage was funded through a grant provided by Metro, and they include new route numbers that have been assigned to all bike paths, bike lanes and bike routes that correspond to the City's new bike map.

Page data
Retrieved from "https://www.appropedia.org/w/index.php?title=Long_Beach_community_action&oldid=657096"
Cookies help us deliver our services. By using our services, you agree to our use of cookies.
Categories:
About Appropedia · Policies · Contact · Content is available under CC-BY-SA-4.0 unless otherwise noted.