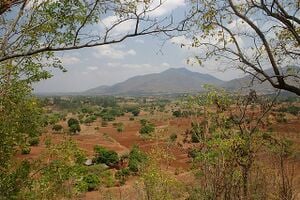 Malawi (; Chewa: [maláβi] or [maláwi]; Tumbuka: Malaŵi), officially the Republic of Malawi, is a landlocked country in Southeastern Africa that was formerly known as Nyasaland. It is bordered by Zambia to the west, Tanzania to the north and northeast, and Mozambique to the east, south and southwest. Malawi spans over 118,484 km2 (45,747 sq mi) and has an estimated population of 19,431,566 (as of January 2021). Malawi's capital (and largest city) is Lilongwe. Its second-largest is Blantyre, its third-largest is Mzuzu and its fourth-largest is its former capital, Zomba. The name Malawi comes from the Maravi, an old name for the Chewa people who inhabit the area. The country is nicknamed "The Warm Heart of Africa" because of the friendliness of its people.

The part of Africa now known as Malawi was settled around the 10th century by migrating Bantu groups. Centuries later, in 1891, the area was colonised by the British and became a protectorate of the United Kingdom known as Nyasaland. In 1953, it became a protectorate within the semi-independent Federation of Rhodesia and Nyasaland. The Federation was dissolved in 1963. In 1964, the protectorate was ended: Nyasaland became an independent country under Queen Elizabeth II, and was renamed Malawi. Two years later it became a republic. It gained full independence from the United Kingdom, and by 1970 had become a totalitarian one-party state under the presidency of Hastings Banda, who remained in this role until 1994. Today, Malawi has a democratic, multi-party republic headed by an elected president. Lazarus Chakwera of the Malawi Congress Party led the Tonse Alliance grouping of nine political parties and won the court-mandated Presidential Election rerun held on 23 June 2020 after the May 2019 Presidential Election was annulled due to massive electoral irregularities. The country's military, the Malawian Defence Force, includes an army, a navy, and an air wing. Malawi's foreign policy is pro-Western. It maintains positive diplomatic relations with most countries, and participates in several international organisations, including the United Nations, the Commonwealth of Nations, the Southern African Development Community (SADC), the Common Market for Eastern and Southern Africa (COMESA), and the African Union (AU).

Malawi is among the world's least-developed countries. The economy is heavily based on agriculture, and it has a largely rural and rapidly growing population. The Malawian government depends heavily on outside aid to meet its development needs, although the amount needed (and the aid offered) has decreased since 2000. The Malawian government faces challenges in its efforts to build and expand the economy, improve education, healthcare, and environmental protection, and become financially independent despite widespread unemployment. Since 2005, Malawi has developed several programs that focus on addressing these issues, and the country's outlook appears to be improving: Key indicators of progress in the economy, education, and healthcare were seen in 2007 and 2008.

The wildlife of Malawi is composed of the flora and fauna of the country. Malawi is a landlocked country in southeastern Africa, with Lake Malawi taking up about a third of the country's area. It has around 187 species of mammal, some 648 species of birds have been recorded in the country and around 500 species of fish, many of them endemic, are found in its lakes and rivers. About 20% of the country has been set aside as national parks and game and forest reserves.

From Wetlands § Wetlands and sustainable livelihood.[edit]

Wetlands are vital ecosystems that provide livelihoods for the millions of people who live in and around them. The Millennium Development Goals (MDGs) called for different sectors to join forces to secure wetland environments in the context of sustainable development and improving human wellbeing.

A three-year project carried out by Wetlands International in partnership with the International Water Management Institute found that it is possible to conserve wetlands while improving the livelihoods of people living among them. Case studies conducted in Malawi and Zambia looked at how dambos – wet, grassy valleys or depressions where water seeps to the surface – can be farmed sustainably to improve livelihoods. Mismanaged or overused dambos often become degraded, however, using a knowledge exchange between local farmers and environmental managers, a protocol was developed using soil and water management practices. Project outcomes included a high yield of crops, development of sustainable farming techniques, and adequate water management generating enough water for use as irrigation. Before the project, there were cases where people had died from starvation due to food shortages. By the end of it, many more people had access to enough water to grow vegetables. A key achievement was that villagers had secure food supplies during long, dry months. They also benefited in other ways: nutrition was improved by growing a wider range of crops, and villagers could also invest in health and education by selling produce and saving money. W

William Kamkwamba (born August 5, 1987) is a Malawian inventor, engineer, and author. He gained renown in his country in 2001 when he built a wind turbine to power multiple electrical appliances in his family's house in Wimbe, 32 km (20 mi) east of Kasungu, using blue gum trees, bicycle parts, and materials collected in a local scrapyard. Since then, he has built a solar-powered water pump that supplies the first drinking water in his village and two other wind turbines, the tallest standing at 12 meters (39 ft), and is planning two more, including one in Lilongwe, the political capital of Malawi.

New Global Coalition launched to address impacts of Climate Change, Jan 25[1] Developed by the UK in partnership with Egypt, Bangladesh, Malawi, the Netherlands, Saint Lucia and the United Nations, this new Coalition will work to turn international political commitments made through the United Nations Call for Action on Adaptation and Resilience into on-the-ground support for vulnerable communities.

How Solar power is bringing food security to Africa, Nov 25[4]

Malawi's solar power revolution starts by bringing schoolchildren out of the dark, August 11[7]

Klem project enables Malawians to make their own shoes, January 22[10]

International NGOs and community-based organizations in Kenya, Malawi, Tanzania and Zambia have created a micro-franchise named Sunny Money, which recruits, trains and supports a growing network of solar entrepreneurs in East Africa, especially deaf and disabled people, helping them build and sell solar kits to power lights, radios and mobile phones.[11] May 12, 2009