From Appropedia
Redirected from Egypt 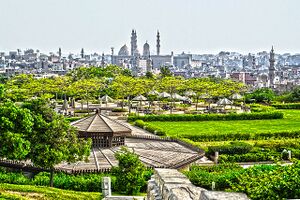 Egypt (Arabic: مِصر, romanized: Miṣr, Egyptian Arabic pronunciation: [masˤr]), officially the Arab Republic of Egypt, is a transcontinental country spanning the northeast corner of Africa and southwest corner of Asia via a land bridge formed by the Sinai Peninsula. It is bordered by the Mediterranean Sea to the north, the Gaza Strip (Palestine) and Israel to the northeast, the Red Sea to the east, Sudan to the south, and Libya to the west. The Gulf of Aqaba in the northeast separates Egypt from Jordan and Saudi Arabia. Cairo is the capital and largest city of Egypt, while Alexandria, the second-largest city, is an important industrial and tourist hub at the Mediterranean coast. At approximately 100 million inhabitants, Egypt is the 14th-most populated country in the world.

Egypt has one of the longest histories of any country, tracing its heritage along the Nile Delta back to the 6th–4th millennia BCE. Considered a cradle of civilisation, Ancient Egypt saw some of the earliest developments of writing, agriculture, urbanisation, organised religion and central government. Iconic monuments such as the Giza Necropolis and its Great Sphinx, as well the ruins of Memphis, Thebes, Karnak, and the Valley of the Kings, reflect this legacy and remain a significant focus of scientific and popular interest. Egypt's long and rich cultural heritage is an integral part of its national identity, which reflects its unique transcontinental location being simultaneously Mediterranean, Middle Eastern and North African. Egypt was an early and important centre of Christianity, but was largely Islamised in the seventh century and remains a predominantly Sunni Muslim country, albeit with a significant Christian minority, along with other lesser practiced faiths.

Egypt is a highly urbanized country, whose population is growing by 1.3 million people per year. Rapid urbanization has brought with it a lot of informal housing, squatting and slums.

The status of housing co-ops in Egypt is such that there are provisions in the nation's constitution requiring the state to take care of cooperative associations. They are exempt from a range of taxes and fees under the country's legislation, which also requires the state to facilitate loans and offer discounts on land. Housing cooperatives receive a guaranteed discount of 25 percent on land owned by the government, which ministerial approval can bring up to as much as 50 percent.

About one-third of the 80 million strong Egyptian population are members of housing cooperatives. In the last 60 years, more than 2,300 housing co-op societies, comprising half a million dwellings, have been established.[1]

Cairo from Below, information and debate on the urban future of Cairo

New Global Coalition launched to address impacts of Climate Change, Jan 25[2] Developed by the UK in partnership with Egypt, Bangladesh, Malawi, the Netherlands, Saint Lucia and the United Nations, this new Coalition will work to turn international political commitments made through the United Nations Call for Action on Adaptation and Resilience into on-the-ground support for vulnerable communities.

The three-degree world: cities that will be drowned by global warming, Nov 3[4]