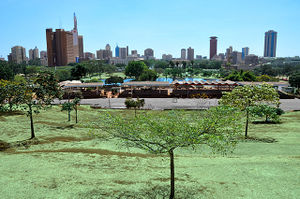 Nairobi has many parks and open spaces throughout the city. Much of the city has dense tree-cover and plenty of green spaces. The most famous park in Nairobi is Uhuru Park. The park borders the central business district and the neighbourhood Upper Hill. Uhuru (Freedom in Swahili language) Park is a centre for outdoor speeches, services, and rallies. The park was to be built-over by former President Daniel arap Moi, who wanted the 62-storey headquarters of his party, the Kenya African National Union, situated in the park. However, the park was saved following a campaign by Nobel Peace Prize winner Wangari Maathai.

"How we mapped the world's weirdest streets" by @transitapp, February 12[1]

When tech, dev, academia and communities work together…[2] September 29

A group of teenagers from Nairobi won the $8000 Passion Pictures Best Film and Artists Project Earth Youth Visions award as part of the 1 min to Save the World contest, which challenged young filmmakers to create a one-minute video about climate change.[3] Ndesanjo Macha, February 22

Page data
Retrieved from "https://www.appropedia.org/w/index.php?title=Nairobi_community_action&oldid=656131"
Cookies help us deliver our services. By using our services, you agree to our use of cookies.
Categories:
About Appropedia · Policies · Contact · Content is available under CC-BY-SA-4.0 unless otherwise noted.