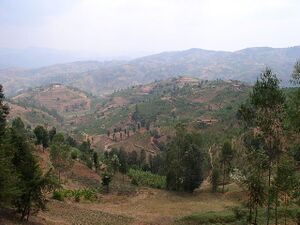 Rwanda ( (listen); Kinyarwanda: u Rwanda [u.ɾɡwaː.nda] (listen)), officially the Republic of Rwanda, is a landlocked country in the Great Rift Valley of Central Africa, where the African Great Lakes region and Southeast Africa converge. Located a few degrees south of the Equator, Rwanda is bordered by Uganda, Tanzania, Burundi, and the Democratic Republic of the Congo. It is highly elevated, giving it the soubriquet "land of a thousand hills", with its geography dominated by mountains in the west and savanna to the southeast, with numerous lakes throughout the country. The climate is temperate to subtropical, with two rainy seasons and two dry seasons each year. Rwanda has a population of over 12.6 million living on 26,338 km2 (10,169 sq mi) of land, and is the most densely populated mainland African country; among countries larger than 10,000 km2, it is the fifth most densely populated country in the world. One million people live in the capital and largest city Kigali.

The wildlife of Rwanda comprising its flora and fauna, in prehistoric times, consisted of montane forest in one third the territory of present-day Rwanda. However, natural vegetation is now mostly restricted to the three National Parks and four small forest reserves, with terraced agriculture dominating the rest of the country.

From Wikipedia:Wildlife of Rwanda § Conservation

Conservation management plans have been instituted for all protected areas which involves the community of villages living in and around the protected areas. Conservation activities have focused on increasing the forest density by planting trees in a "natural self rehabilitation and natural regeneration of primary and high value species". The planting has involved species such as carissa macrocarpa, entandrophragma (a genus of eleven species of deciduous trees) and symphonia globulifera, and erecting protective fencing on the boundary of the forest reserves using leguminous thorny plants.

One of the concerted efforts initiated by the Government of Rwanda is to increase the number of protected areas and to proliferate tree plantations to increase the present forest area cover of 10% to 20% by 2020.

The country had a 2019 Forest Landscape Integrity Index mean score of 3.85/10, ranking it 139th globally out of 172 countries. — From Wikipedia:Rwanda#Biodiversity

The use of off-grid solar power has increased as solar panel prices have fallen and many areas do not expect grid connections in the near future. Solar power produces over 2% of electricity in the country. The country is in the midst of a rapid expansion of its electrical grid and many new plants are proposed or under construction.

How Rwanda's clinics have gone off-grid and onto renewable energy, June 25[5]

"Production and Distribution of Pressurized Biogas in Gas Cylinders". This initiative has been developed by a private company, an international NGO and government organizations to produce and store pressurised biogas for cooking made from urban, domestic and industrial wastes. Environmental benefits are achieved by offering an alternative firing material to firewood and charcoal.

"Efficient Charcoal Production and Smoke Recycling". This partnership of international NGOs, government institutions and a reforestation initiative is promoting new technologies to increase the energy output of charcoal. As a result, this significantly reduces the amount of forestland used for the production of charcoal and lessens air pollution by recycling tar and other smoke components.