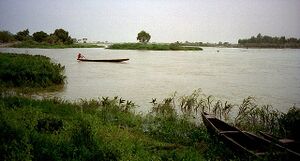 2009 SEED Award Winners:"Almodo". A partnership between a small business and a research institution is developing a sustainable self-financing solid waste management system that contributes to improving living conditions of the poorest population, in collaboration with a women's group that collects solid waste in poor urban areas of Niger's three biggest cities.[2] May 12

Environmental issues in Niger include destructive farming practices as a result of population pressure. Illegal hunting, bush fires in some areas and human encroachment upon the flood plains of the Niger River for paddy cultivation are environmental issues. Dams constructed on the Niger River in the neighbouring countries of Mali and Guinea and also within Niger itself are also cited as a reason for a reduction of water flow in the Niger River—which has a direct effect upon the environment. A lack of adequate staff to guard wildlife in the parks and reserves is another factor cited for loss of wildlife. W

Page data
Retrieved from "https://www.appropedia.org/w/index.php?title=Niger_community_action&oldid=657296"
Cookies help us deliver our services. By using our services, you agree to our use of cookies.
Categories:
About Appropedia · Policies · Contact · Content is available under CC-BY-SA-4.0 unless otherwise noted.